Where Slaughtered Dolphins Go to Be Sold 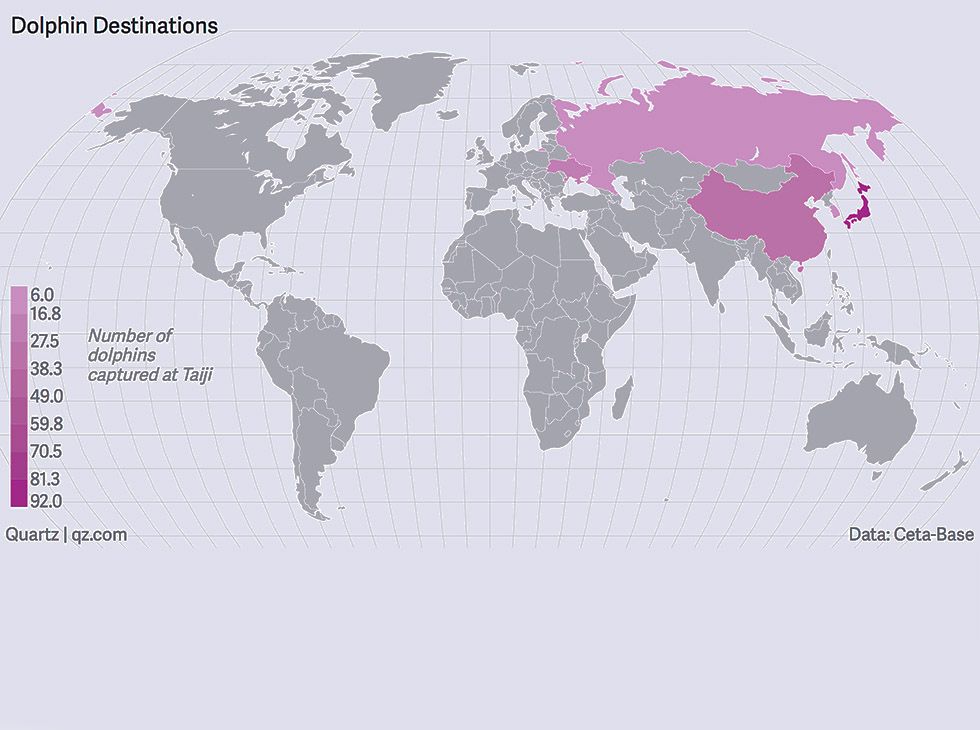 Activists say demand by water parks and aquariums for dolphins is driving the slaughter now under way in Taiji, Japan.

12 Sep 2014 – As the annual dolphin-killing season begins at the cove at Taiji, Japan, the focus will be on the slaughter. Far less attention will be paid, however, to the fate of dolphins captured and sold to marine-mammal entertainment parks worldwide.

But some activists are bringing their fight to facilities that fuel demand for live dolphins.

Live dolphins are far more lucrative than dead ones. Taiji fishermen can earn $150,000 or more from selling a single live animal, while one butchered for meat fetches only $500 to $600, an economic reality that keeps the drives in business, opponents say.

It is impossible to know the final fate of all dolphins captured in Taiji. The Japanese government does not keep figures, nor does the World Association of Zoos and Aquariums (WAZA). Most information comes from newspapers, activists on the ground, or people in countries where dolphins are destined to perform for or swim with tourists.

One website, Ceta-Base, tracks captive cetaceans and documents about where some, but not all, Taiji dolphins go. There were about 300 live captures in Taiji in 2013, according to the site, but information only exists on about half of those animals. Here’s the count: 92 dolphins were transferred to Japan, 36 went to China, 20 to Ukraine, 11 to Russia, six to South Korea, and five to Vietnam.

Worldwide, 105 facilities in about 20 countries import or display dolphins obtained from Taiji, according to Ceta-Base.

Kish Dolphin Park in Iran, for example, imported 12 dolphins in 2008. Dolphinarium NEMO, in Ukraine, bought 36 dolphins between 2010 and 2013; Saudi Arabia’s Fakieh Aquarium purchased six dolphins in 2013; and Cabo Adventures, a swim-with park in Baja, Mexico (the only site in the Americas with Taiji dolphins), imported seven animals in 2005.

Many animals never leave Taiji, including Angel, an albino calf captured in January and now on display at the Taiji Whale Museum.

Ric O’Barry, star of the Oscar-winning documentary The Cove and head of the Dolphin Project, is one of the activists fighting against the demand side of the dolphin trade.

In 2006, O’Barry learned that 12 Taiji dolphins had been sold to Ocean World Adventure Aquatic Park in the Dominican Republic. The park paid $154,000 per animal but never took delivery, following an international outcry.

“As soon as I found out, I came here to the DR and bought a full-page ad in the largest newspaper, an open letter to the president at the time, [Leonel] Fernández,” O’Barry said in an interview at the time.

In 2010, while in Taiji, O’Barry and his son Lincoln were alerted by an Egyptian environmental group that four dolphins captured in the cove had been placed in the swimming pool of a private villa in the Red Sea resort of Hurghada.

Lincoln was producing an Animal Planet series, Blood Dolphins, so father, son, and crew hopped a plane to locate and film the dolphins.

“When we got there, they were transferring the dolphins from the pool to a hole in the ground they dug out in the desert,” O’Barry said.

O’Barry wanted to contest the importation. “We read in the newspaper that they didn’t have the necessary permits and thought maybe we could get them sent back to Japan,” he said.

He didn’t mean Taiji: He travelled to Mikurajima Island, part of Tokyo, where residents celebrate, name, and even grant citizenship to local dophins. “I went to look for a place to build a sanctuary to get them returned from the desert,” he said.

But political unrest was exploding into widespread violence in Egypt. “A full-blown war was going on,” O’Barry said. “So we just gave up.”

The “Taiji Four,” as they were known, remained in the sun-scorched, dusty hole in the Eastern Sahara. “This is where Taiji dolphins go,” O’Barry said. “It’s despicable.” The site is now a dolphinarium. “We’re not sure if the four are still alive,” he added.

Meanwhile, the number of dolphins sold into captivity continues to rise. “It’s clear that demand continues to drive these brutal hunts,” Courtney Vail of Whale and Dolphin Conservation said in an email.

O’Barry recently learned that some Taiji-caught dolphins currently in Russia are slated for export to a park in Phuket, Thailand.

“Russians built the facility, but the permit hasn’t been approved yet,” he said. “This may be a chance to block the dolphins like we did in the DR.”

David Kirby has been a professional journalist for 25 years. His third book, Death at Seaworld, was published in 2012.