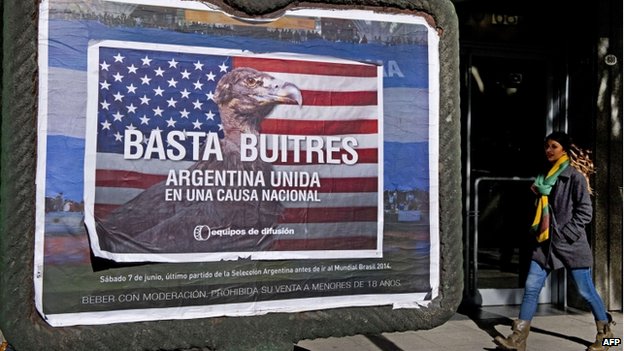 “Enough vultures – Argentina united around a national cause,” reads the poster displayed in Buenos Aires

26 Sep 2014 – The United Nations Human Rights Council has passed a resolution in Geneva condemning a group of American hedge funds that took Argentina to court.

The investors are demanding payments worth more than $1.3bn (£766m) dollars on government bonds they hold.

Argentina defaulted on its debts in July after refusing to comply with a US court ruling in favour of the funds.

It is searching for ways of meeting its obligations to its other creditors without paying the hedge funds in full.

The Argentine government has accused the hedge funds, which it refers to as vulture funds, of being greedy and damaging its economy.

“The vulture funds will not stop unless we stop them ourselves,” Foreign Minister Hector Timerman told the council before the vote.

“The billions that these vulture funds grab in countries in the south lead to school closures, hospitals without medicines, political instability, insecurity and violence,” he said.

The resolution was tabled by Argentina along with Russia, Brazil, Venezuela and Algeria.

It was approved by 33 votes to five, with nine countries abstaining.

The United States, Britain, Germany, Japan and the Czech Republic voted against.

The resolution “condemns the activities of vulture funds” and says it regrets the effect the debt payment to such funds could have “on the capacity of governments to fulfil their human rights obligations”.

The American representative at the council, Keith Harper, said the text was unacceptable.

“The state’s responsibility for promoting and protecting human rights and fundamental freedoms is not contingent on its sovereign debt situation,” he said.

The uncertainty could “drive up borrowing costs or even choke off financing for developing countries,” added Mr Harper.

They rejected the terms of a restructuring agreed by most bondholders in 2005 and 2010 which saw two-thirds of the bonds’ pre-crisis value written off.

The hedge funds are instead demanding a full 100% repayment of the debt.

Argentina fell into default again in July after US District Judge Thomas Griesa barred the Bank of New York Mellon from transferring an interest payment to bondholders unless Argentina settled with the hedge funds.