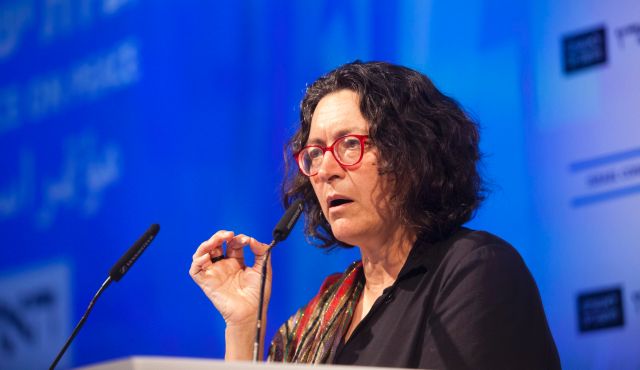 A Palestinian university’s decision to bar from its campus an Israeli journalist and outspoken critic of the occupation has exposed a growing rift among Palestinian activists about the merits of contact with Jewish Israelis.

Staff at Bir Zeit University, near Ramallah in the West Bank, ordered Amira Hass, a reporter for the Israeli daily Haaretz newspaper, to leave a public conference late last month. She was told it was for her own “safety” in case students protested against her presence.

Hass, who has lived among Palestinians in the occupied territories for many years, is a rare critical voice against the occupation in the Israeli media. Her articles translated in Haaretz’s English edition are widely read outside Israel.

Bir Zeit’s decision has provoked a heated debate among Palestinian intellectuals, students and activists about how far refusal to cooperate with Israelis should extend.

Observers say hostility towards Israeli Jews of all political stripes has become more pronounced among some Palestinian youth over the past few years. The trend is especially strong in Ramallah, where many Bir Zeit students live.

However, a petition circulated on social media against Hass’ exclusion quickly attracted signatures from hundreds of Palestinian scholars, who noted that she was a “courageous human rights defender”. In a column in Al-Ayyam newspaper, Ghassan Zaqtan, a prominent poet, called Hass’ treatment “shameful”.

Meanwhile, Israeli political activists have been left wondering whether, if the next generation of Palestinians rejects all joint endeavours, they have a place either in the struggle against the occupation or in a solution to the conflict.

“The question is whether Palestinians want a South African model of an inclusive solution that offers a shared future for Palestinians and Israelis, or an Algerian model of exclusion,” said Jeff Halper, the head of the Israeli Committee Against House Demolitions, an Israeli group that campaigns against the demolition of Palestinian homes in the occupied territories.

Referring to the expulsion of French colonists from Algeria in the early 1960s, he said: “Increasingly, it sounds like the Palestinian view is that this is another Algeria. If Israelis are simply colonial settlers, then we have no right to remain here.”

In a report for her newspaper, Hass wrote that other notable Israeli dissidents, such as Ilan Pappe, an historian who characterises the dispossession of Palestinians in 1948 as ethnic cleansing, had in the past been forced to hold talks off campus.

She said university staff had told her they were enforcing a regulation from the mid-1990s intended to create a “safe space” for students.

For decades, the Israeli army has targeted Bir Zeit, the most prestigious place of learning in the West Bank and a hotbed of political activism, harassing and arresting students and staff.

According to the Israeli media, more than 1,000 Palestinian students have been arrested by Israel since 2000, with most of them from Bir Zeit. That number includes three former heads of the student council. In 2009 alone, 83 students from the university were arrested or jailed.

Omar Barghouti, a prominent activist in the boycott movement in Ramallah, said he opposed exclusion of individuals but understood why there was increasing opposition to co-operation with Israelis from some young activists.

“Most students’ only experience of ‘meeting’ Israelis is being arrested by soldiers and tortured by the Shin Bet [Israel’s intelligence service]. Without a doubt, it colours their view.”

The row about Hass prompted the university to hastily issue a statement in which it seemed to reverse policy. Staff and students would be told that the university opposed all “discrimination based on identity”. The statement added that Israelis “on the side of justice and humanity”, such as Hass, would always be welcomed on campus.

But many students appeared unhappy with the administration’s more conciliatory tone.

Shortly after the statement was issued, Bir Zeit’s student council demanded it be withdrawn. “We say that any Israeli Zionist is not welcome in Bir Zeit University,” Mustafa Mustafa, the student council’s leader, told the Associated Press news agency. “If Amira really supports the Palestinian struggle against the occupation, she needs to leave the country.”

The controversy was pounced on by commentators in Israel and abroad. In Commentary, a conservative US magazine, Evelyn Gordon asked: “How is peace possible when Birzeit [sic] is educating these future Palestinian leaders to believe all Israeli Jews should be shunned simply because they are Israeli Jews?”

Ghassan Khatib, a senior official at the university, told Middle East Eye that things had changed significantly since his time studying at Bir Zeit in the 1970s.

“At that time we would make huge efforts to find Israelis to meet or debate us. There were Israeli Jews who came to show solidarity when we were attacked by the occupation forces, including during the first intifada [in the late 1980s].”

The situation for today’s generation is very different, he said. “The [Israeli] peace camp has collapsed, and there is no visible debate in Israeli society about ending the occupation or even criticism of what happened in Gaza this summer. In that climate, young people cannot see a reason for any interaction and dialogue with Israelis.”

The debate about dealings with Israelis should be understood in the context of a wider policy across the Arab world opposing what is termed “normalisation”. According to this view, there should be no normal relations with Israel until the occupation ends.

Bir Zeit’s policy was formulated in the mid-1990s, at the time when the Palestinian leadership returned to the occupied territories from exile in Tunisia under the terms of the Oslo accords.

But while the Arab world has rarely needed to test the intricacies of its anti-normalisation approach, given its lack of public contacts with Israel, Palestinians in the occupied territories have found the policy more complicated to implement.

With the Palestinian economy almost completely dependent on Israel, casual labourers need permits to work in Israel or the settlements, business leaders require Israel’s assistance with exports and imports, and the Palestinian Authority has to cooperate closely with Israel on many matters, including security.

At the same time, Khatib observed, Israel’s policy of separation – culminating in the building of a wall across the West Bank and the “disengagement” from Gaza a decade ago – severely limited the possibility of contacts between Israelis and Palestinians. That was especially true, he said, in the Palestinian cities, which were designated by Israeli military regulations as off-limits to Israelis.

Sam Bahour, a businessman and political activist in Ramallah, said: “What makes no sense to me is that young people are vehemently protesting against any contact with Israeli Jews, even those who are on their side, and yet publicly they barely say a word against Palestinian security cooperation with Israel.”

He contrasted their position with that held in Palestinian rural areas close to the Green Line, which formally demarcates the boundary between Israel and the occupied territories. “There every week Israeli activists are coming to help Palestinian villagers struggle against the Israeli army’s confiscation of their lands.

“The irony is that farmers are fostering cooperation while Palestinian intellectuals and academics are opposed.”

Bahour cited his own bitter experiences two years ago when he tried to bring to Ramallah an Israeli group, Zochrot, that supports the right of return to Israel of Palestinian refugees expelled in the 1948 war, as well as their descendants. The right of return is possibly the biggest taboo in Israeli society.

The meeting, which was to have discussed strategies for effecting a return of the refugees, had to be cancelled after young Palestinian activists mounted a Facebook campaign threatening to disrupt the meeting.

In one post, an opponent called the meeting an “act of immoral normalisation”. Another protested at the Palestinians’ continuing dispossession by Israel: “When they drop their ‘Israeli citizenship’, I can look [at] them as partners, but since they [are] still living in my grandfather’s house in Akka, Yaffa, Safad, they [are] occupiers.”

“Such reactions show no understanding of the need to create political alliances and to break down barriers if we want to make progress on finding a solution to the conflict,” said Bahour.

Bahour blamed the lack of effective political leadership for encouraging sloganeering rather than organised and coherent action from Palestinian activists.

“The PA is talking about getting statehood at the UN but there is no debate about how we envision relations with Israelis post-occupation.”

Halper concurred. “It’s like Palestinians have given up on the occupation ever ending. No one talks about where Israelis fit in, no one is sure of the policy. That’s why Amira Hass gets caught up in this incident at Bir Zeit.”

Sami Kilani, a professor at An-Najah university in Nablus who signed the petition in support of Hass, said that, in expelling her, Bir Zeit had “forgotten the bigger picture”.

“It’s a self-defeating approach,” he told Middle East Eye. “An-Najah invites Israelis to come to meetings and conferences so that we can hear and learn from each other. But given Israel’s military restrictions, they usually either can’t or won’t come.”

Bahour and Kilani are among those hoping that Hass’ exclusion will force a more critical re-appraisal of popular notions of anti-normalisation.

Bahour said Bir Zeit’s policy was inconsistent with the more precise guidelines introduced since 2005 by the Palestinian movement calling for boycott, divestment and sanctions (BDS) against Israel, modelled on a similar campaign against apartheid South Africa.

Barghouti, one of the founders of the BDS movement, said the guidelines for boycott did not apply to individuals, only to institutions and projects that failed to follow the principle of what he called “co-resistance”.

Barghouti added that the Palestinian Campaign for the Academic and Cultural Boycott of Israel (PACBI) had never requested that Palestinian universities endorse BDS, aware of their precarious situation under occupation.

Some commentators, however, have suggested that the action against Hass was in accordance with BDS.

They have observed that Hass was expelled from the meeting after she had registered herself as a representative of the Haaretz newspaper, an institution that would be covered by the call for boycott.

Jews for Justice for Palestinians is a network of Jews who are British or live in Britain, practising and secular, Zionist and not. We oppose Israeli policies that undermine the livelihoods, human, civil and political rights of the Palestinian people. We support the right of Israelis to live in freedom and security within Israel’s 1967 borders. As well as organising to ensure that Jewish opinions critical of Israeli policy are heard in Britain, we extend support to Palestinians trapped in the spiral of violence and repression. We believe that such actions are important in countering antisemitism and the claim that opposition to Israel’s destructive policies is itself antisemitic.

One Response to “Amira Hass Banned from Bir Zeit University”