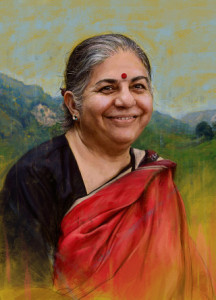 The conflict between “free trade” and food rights came to the fore again at the World Trade Organization (WTO) negotiations in September [2014], when India did not back down from its stance that a permanent solution be found for food security issues before signing the Trade Facilitation Agreement /(TFA).

The TFA is designed to push free trade further, with heavy losses to India’s food security. The U.S. had challenged India at the WTO’s Bali Ministerial in 2013, on the ground that the Food Security Act adopted by the United Progressive Alliance (UPA) regime would increase India’s food subsidies beyond levels allowed by the WTO.

The rules allow subsidies at 10 percent of the value of agricultural produce. Oddly, the base year for India has been fixed at 1986-88. India, justifiably, is demanding that this date be changed to reflect the reality of food prices today. Double standards in the WTO rules are also exposed when one realizes that India’s subsidies of $12 billion to its 500 million farmers are considered “trade distorting,” while U.S. subsidies of $120 billion to its 2 million farmers are not. India’s subsidies are $25 per farmer, while U.S. subsidies amounts to $60,000 per farmer—that’s 2,40,000 percent more than Indian subsidies. Yet the U.S. is threatening India and demanding the removal of support to its small and marginal farmers.

These are not rules of trade, but rules of manipulation written during the Uruguay Round of Trade Negotiations, which led to the establishment of the WTO, by agribusiness corporations seeking to profit from India’s large food and agriculture market. The WTO debate on food and agriculture subsidies is actually intended to force India to stop supporting its farmers through procurement at the minimum support price (MSP) so that 1.25 billion Indians, including the 810 million covered by the Food Security Act, become a market for multinational corporations.

In the Northeast, the cost of production has risen by 53 percent between 2008-2009 and 2011-12, while MSP has risen by only 20 percent. A negative economy translates into debt and un-payable debt translates to suicides. Debt is due to dependence on MNCs who sell costly seeds and chemicals.

The WTO rules are, in fact, written by corporations for transforming public goods into globally traded commodities and capturing our economies for their profits. Monsanto, now the world’s biggest seed giant, wrote the Trade Related Intellectual Property Rights (TRIPs) Agreement of WTO, which opened the floodgates for patenting seeds and life forms. It has blocked the mandatory review of Article 27.3 (b) since 1999 wherein governments, including India, have called for “no patents on life.” Cargill, the world’s grain giant, wrote the rules of the Agreement on Agriculture (AOA) and would be the biggest beneficiary if India stops procuring from its small farmers.

Food is a fundamental right, a basic need and the livelihood of a majority of Indians. The rules governing it should be rules of sustainability and justice, not rules for the profit of a handful of seed and food multinationals.

It is time to review both the TRIPs agreement and the agriculture agreement of the WTO because they are destroying the planet and the livelihoods of our farmers and denying the poor and the vulnerable the Right to Food. One just has to look at the evidence. Since trade liberalization was forced on us by the WTO in 1995, 3,00,000 farmers have committed suicide because of debt due to the purchase of costly seeds and chemicals. Every fourth Indian is hungry. And every second Indian child is stunted.

Average calorie intake in rural areas has declined from 2,221 kilocalories in 1983 to 2,020 kilocalories in 2009-10; protein intake has dropped from 62 grams to 55 grams per day in the same period. In urban areas, the calorie intake stood at 1,946 in 2009-10, a decline from 2,089 kilocalories in 1983. Protein intake declined to 53.5 grams from 57 grams in the same period. These are direct consequences of the rules of trade liberalization, which have transformed food from a right to a commodity for trade and profits.

Addressing the twin epidemics of farmers’ suicides and hunger requires rewriting the rules of trade on the basis of sustainability and justice. India’s refusal to dismantle its food security system to further benefit MNCs is an opportunity to start redefining global trade on the basis of people’s rights rather than corporate profits.

Seed sovereignty is the foundation of food sovereignty. Farmers’ suicides are linked to seed monopolies and high costs of seed. Seed must be put back in the farmers’ hands through creation of village seed banks and capacity-building in participatory and evolutionary breeding to deal with climate change.

Internationally, seed sovereignty requires ensuring that the mandatory TRIPs’ review of Article 27.3 (b) is completed. For food sovereignty, we need to ensure that farmers do not fall into debt and are able to earn a dignified and fair income. While we need to defend our right to support farmers through MSP, it is evident that MSP is no longer covering the costs of production. The government has, in fact, frozen MSP in 2013-2014. The alternative is to reduce costs of production by reducing dependence on chemicals and corporate seeds through ecological farming. This is why organic farming based on the principle of agroecology has become an imperative for food sovereignty.