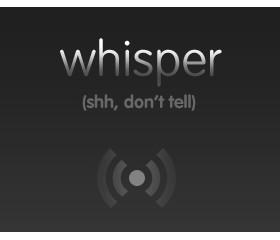 Whisper – a new social network that claims to provide anonymity – has been accused of  secretly tracking users. The allegations were made by the Guardian newspaper, provoking renewed scrutiny of a multitude of data privacy claims made by software companies.

Makers of the Whisper application, which was launched in March 2012, claim that anyone that posts thoughts or secrets on their web site will remain anonymous. In the last 30 months, the company has exploded in popularity with over 2.6 million posts a day, notably by college students, who use the application to put up a picture and a line of text for anyone to read.

But Whisper also secretly mines the posts to send out hundreds of pitches a week to over 75 media organizations ranging from serious newspapers like the Guardian and the Washington Post to blog sites like Mashable and low brow entertainment web sites like Total Frat Move. The media can also request information on a certain topic or help finding sources.

The Guardian revelations were made after newspaper executives met with the company to discuss deepening their collaboration. The newspaper says it was astonished to discover that the company was secretly storing users posts as well as rough location data in an in-house searchable database.

The application data can also be provided to governments. “Whisper is also sharing information with the U.S. Department of Defense gleaned from smartphones it knows are used from military bases, and developing a version of its app to conform with Chinese censorship laws,” wrote Paul Lewis and Dominic Rushe in a Guardian article published Thursday.

The Guardian articles said that the data shared with the Pentagon was intended to prevent suicides and self-inflicted harm. It also claimed that Neetan Zimmerman, the editor-in-chief, was using the data stored to track individuals that Whisper believed worked for companies like Disney and Yahoo as well as on Capitol Hill.

The company denied the story immediately. “Whisper does not collect nor store: name, physical address, phone number, email address, or any other form of publicly identifiable information,” Whisper said in a press statement. “The privacy of our users is not violated in any of the circumstances suggested in The Guardian story.”

Zimmerman lashed out stating that the allegation were a “pack of vicious lies.”

However, on Saturday, Michael Heyward, the co-founder of Whisper, tacitly acknowledged some of the claims. “We realize that we’re not infallible, and that reasonable people can disagree about a new and quickly evolving area like online anonymity,” he wrote on Medium, a blog site. “Whisper is not a place for illegal activity. If we receive a valid legal request, or we learn that you tried to use Whisper to post content that exposes imminent danger to yourself or others, we will share the limited information we have, including IP address, with the appropriate authorities.”

The revelations about Whisper come just over 16 months after whistleblower Edward Snowden revealed the extent of U.S. government surveillance of global data communications, provoking an angry reaction from not just the public, but also from data corporations.

“We’re going to wind up breaking the Internet,” Eric Schmidt, Google executive chairman recently said at a panel discussion. “Just as people won’t put their money in a bank they won’t trust, people won’t use an Internet they won’t trust,” Brad Smith, Microsoft’s top lawyer, said at the same event.

Yet, it is clear that the data companies are just as guilty of tracking individuals, if only for marketing purposes. Snowden himself acknowleged as much at another recent panel discussion where he called Google and Facebook “dangerous services.” “The unexplored elephant is the corporations – so privileged, so powerful in access, so unregulated – [and] are then tapped by the government,” he said.

Julian Assange, the founder of WikiLeaks, has echoed this idea. “Google has become an invasive organization that wants to have a business model of formulating every single person it can on the Earth, collecting their private information, storing it, indexing it, and producing profiles of individuals so they can sell those profiles to better target ads on them and also sell its other services to the National Security Agency, and the US military, and enter into strategic relationships with the US state department,” he said at a recent press conference.