It’s Not Too Late to Save Syria’s Cultural Heritage

…If We Can Muster the Will

Inside the Restored Omayyad Mosque, Old City of Damascus 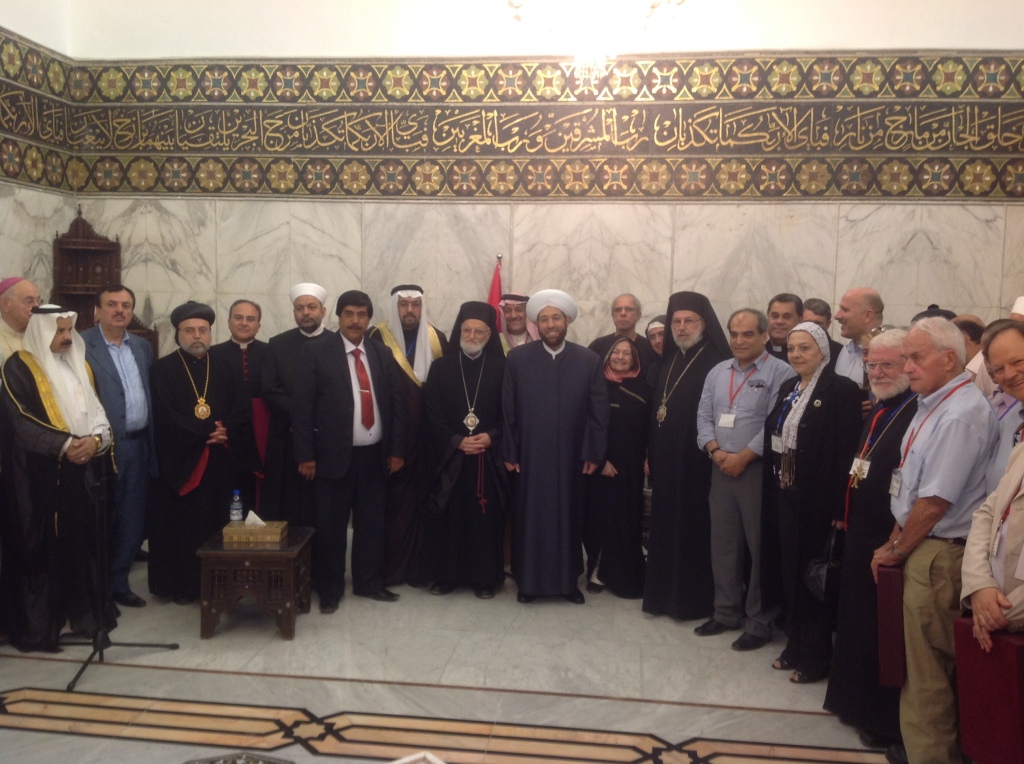 At the Umayyad Mosque with the Grand Mufti seen between Nobel Peace Laureate Mairead Maguire and the Greek Orthodox Patriarche, along with other distinguished guests, May 2013. Franklin Lamb participated in this visit. The TMS editor is behind Mrs. Maguire.

As Marcus Aurelius instructs us: “Look back over the past, with its changing empires that rose and fell, and you can foresee the future too.”

By definition, our shared global heritage, which has been in the custody of the Syrian people for ten millennia, belongs to all of us and for this reason each of us must work to preserve it for our progeny.

The people of Syria are petitioning the United Nations, regional powers, archeologists and our wider global community to, reject, as they themselves do, the rationale of ‘ unavoidable war-time collateral damage’ in their conflict which today is severely assaulting archeological treasures in their beloved country. Over the past century, scientific excavations and study of our global heritage in Syria have barely scratched the surface so rich as concentrated are archeological artifacts from a score of empires that have inhabited this land. Syrians, like the international public are horrified and sickened by the continuing and in some areas, accelerating desecration, illegal excavations, looting and hateful destruction of irreplaceable antiquities.

This observer does not wish to gloss over the alarming media reports on this subject. Nor my own on-site field investigations over the past nearly three years chronicling and photographing damaged archeological sites across much of Syria. The research project has been part of a volume to be published next month in Arabic and English entitled, Syria’s Endangered Heritage, an International Responsibility to Preserve and Protect, parts of which reveal bleak picture.

But all is not lost.

Indeed much is being done inside Syria, among citizens including students, officials, among them the Ministries of Culture and Tourism, the General Directorate of Antiquities and Museums (DGAM) and even to some degree ‘repentant’ former rebels having physical access to archeological sites and valuing their heritage. Many projects are underway today at archeological sites not under the control of fighters on either side of this horrific internecine conflict out of a felt urgent duty to preserve, protect, and even in some instances to reconstruct our endangered global heritage. 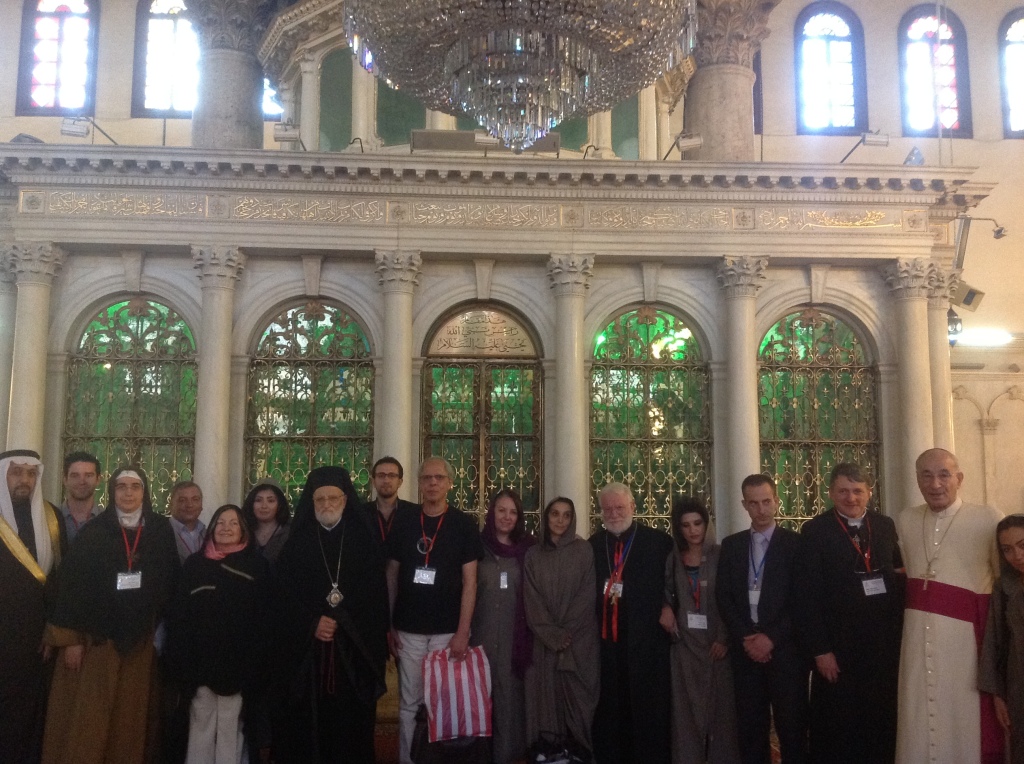 Umayyad Mosque. In front of the tumb of St John Baptist placed at the center of the mosque. Franklin Lamb was present; not in the picture. May/13

Three examples of Syrian archeological sites that were badly damaged since the start of the continuing crisis which began in March of 2011, with details of the damage at these sites reported in the main stream media as well as in some scholarly publications, are the Omayyad Mosque in the Old City of Damascus, the medieval fortress of Crac des Chevaliers near Homs, and the Church of the Holy Belt in the Old City of Homs. This observer first visited and chronicled damages at these three sites months ago as soon as local fighting ceased and security conditions allowed and having revisited them just recently bears witness to the fact that each is now in the final stages of being repaired/rebuilt and are safe and ready to receive visitors.

The remarkable achievements of wartime Syrian antiquities reconstruction are continuing because of leadership from committed officials such as Dr. Maamoun Abdulkarim of DGAM, noted above, and Syria’s indefatigable Bachir Yazigi, Minister of Tourism and member of Parliament, among many others supported by their dedicated staffs. Partners also in restoration of culture sites are students from Damascus and other Universities and institutes such as Directorate of Archaeological Scientific and Reconstructive Laboratories and citizen volunteers as well as some patriotic business people across the social and political spectrum here. This observer visited the Damascus Citadel and witnessed the student’s painstaking restoration of a large irreplaceable Mosaic, tesserae (half inch square stone chip) by tesserae. In the course of visiting damaged archeological sites in Syria, this observer has spent time with skilled teams of artifact restoration students repairing antiquities from artwork in Homs to stone arches at Palmyra. Syrian volunteers share a common deep love of their ancient country and they appear to accept a personal obligation to preserve, protect and restore their and our common global cultural heritage. Repair and reconstruction is expanding today at several other archeological sites.

In Syria today, within government controlled areas scores of community groups are working to preserve our global heritage. One example is a citizen’s national campaign to inform the general public about the value of protecting archeological sites by placing large posters showing endangered treasures.

Below is some example of current posters being posted in public gathering areas:

Workshops on subject such as combating the illicit trafficking in cultural property have been organized, particularly in Damascus and are being attended by interested non-governmental organizations (NGO’s) and the local community including researchers, artists and writers as well as by representatives of ministries and department concerned with the protection of Syrian cultural property. In addition, students and civic volunteers update daily the Arabic and English website of the Directorate General of Antiquities and Museums (DGAM) (www.dgam.gov.sy) with the latest available information about the archaeological heritage of Syria during the crisis.

“Artisan programs” and art classes, including Mosaic restoration and preserving damaged antiquities have been organized and they seek to connect the public,

particularly children and adolescents with nearby archeological heritage sites and local antiquities and artifacts. Classes highlight a range of traditional crafts including mosaics, calligraphy, storytelling, pottery fezzes and sabots (leather sandal and shoe) making. Rather than simply report the bad news about of this country’s archeological treasures events are frequently organized, as on the occasion of the 50th Anniversary of great historic discovery of Ebla, called “Ebla- History and Archaeology” at the Damascus National Museum, open to the public with youth attendance encouraged. The event also featured a photo exhibition about the damage to archaeological sites, especially Ebla, one of the themes communicated being the obligation of each citizens to preserve and protect past whether pagan, Jewish, Christian, Muslim or secular.

Like everywhere these days Syrian youngsters are increasingly active with social-media and one site frequently contributed to is https://www.facebook.com/eyesonheritag by the Eyes on Heritage group. This is just one example of people interested in global cultural heritage interacting to protect our shared cultural heritage.

Another Facebook page, growing in popularity in Syria which is now also a YouTube was created by Protect Syrian Archaeology: The Association for the protection of Syrian Archaeology (APSA). It is intended news about the threats and damages currently suffered by the Syrian archaeological and historical heritage. It is also designed to alert the scientific community and international authorities, either cultural or political. Additional Facebook pages that promote these themes include

Again not wishing to understate the scope or seriousness of this cultural heritage crisis, there is another reason we should not despair completely or give up hope when witnessing the horrible damage being reported at world heritage sites and to antiquities across Syria because there are some hopeful signs. One concerns Syria’s 28 museums since the outbreak of hostilities, nearly four years ago. During the early summer of 2011, private citizens, museum staffs, government ministries, some members of Parliament and some international and local NGO’s sounded an alarm. They warned that the tragic case of what was reported back in 2003 in Iraq, including ransacking the National Museum of Iraq in Bagdad on April 10, 2003 could be repeated in Syria and they were determined to prevent it. They have substantially succeeded.

The worst damage to Syrian museums has been reported by DGAM staff to be in Deir Atieh and Raqqa in eastern Syria, still under IS (Da’ish) control and therefore a precise assessment is not yet available. A few artifacts have been stolen from Maarat al-Numan Museum and the Folk Museum at Aleppo, and the museums in Hama. Moreover, despite widespread illegal excavations in Apamia, the Museum has lost only one object due to theft.

Beyond these and other unknown losses, the contents of all of Syria’s other 26 museums are safe for now because their contents were moved before thefts or damage could occur and today their contents are buried deep in temperature and humidity controlled secret vaults in government controlled areas. In addition, citizens in many communities are discretely safeguarding archaeological sites and reporting to local or national authorities attempted thefts or trafficking in stolen artifacts.

Syrians sometimes ask this observer to advise others that they deeply share the international horror about much now happening in Syria and the continuing endangerment to our shared cultural heritage. They are very aware that international friends want to help preserve and rebuild damaged archeological sites as well as to retrieve stolen articles now being sold in North America, Europe, Asia and elsewhere. What is required from UN member states is action, not just words.

Franklin Lamb is a visiting Professor of International Law at the Faculty of Law, Damascus University and volunteers with the Sabra-Shatila Scholarship Program (sssp-leb.com).

Anticopyright: Editorials and articles originated on TMS may be freely reprinted, disseminated, translated and used as background material, provided an acknowledgement and link to the source, TMS: It’s Not Too Late to Save Syria’s Cultural Heritage, is included. Thank you.