4 Oct 2014 – Under the guise of a humanitarian mission aimed at containing the spread of the Ebola virus, the Obama administration is exploiting the outbreak to establish a solid military footing on the African continent. West Africa continues to be ravaged by the worst outbreak of Ebola since the first case was identified in northern Democratic Republic of Congo in 1976.

According to a report by the World Health Organization, as of October 1 there were 7,437 suspected, probable and confirmed cases of Ebola in Guinea, Liberia, and Sierra Leone and 3,338 deaths. A separate outbreak of a different strain of the virus in the Democratic Republic of Congo has to date killed 43 people including eight health care workers. 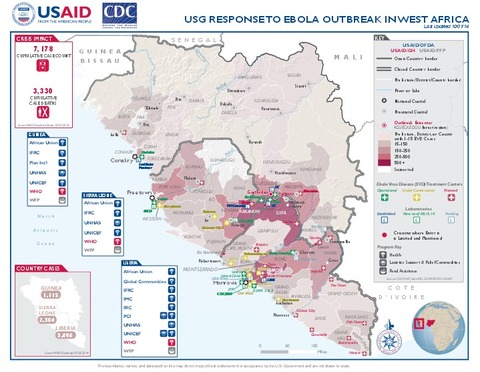 Guinea, Liberia, and Sierra Leone have been the hardest hit by the epidemic, accounting for 99.6 percent of cases and 99.8 percent of deaths. UNICEF reported last week that at least 3,700 children have been orphaned by the epidemic. The already limited health systems of Liberia and Sierra Leone have essentially collapsed under the impact of the outbreak.

The US plan for containing the epidemic, codenamed Operation United Assistance, is being overseen by the US Armed Forces Africa Command (AFRICOM) and is expected to cost $1 billion over the next six months. So far the US government has contributed $111 million to the effort, a paltry sum compared with the $1 billion the US has already spent in two months of airstrikes against ISIS in Iraq, recently extended to Syria.

AFRICOM plans to oversee the deployment of 3,200 troops, most from the 101st Airborne Division, to assist in the construction of emergency Ebola treatment units.

Last week US airmen from the Air Force’s 633rd Medical Group, working with employees from the US Public Health Service, set up a 25-bed Expeditionary Medical Support System (EMEDS) hospital for health care workers who contract the deadly virus.

A 300-bed Ebola treatment unit is currently under construction in Monrovia, the capital of Liberia, on the grounds of an abandoned Ministry of Defense building built prior to the civil wars that devastated the country in the 1990s. The treatment facility and others like it are not expected to be ready to receive patients for a number of weeks.

AFRICOM has no plans to staff these Ebola treatment centers with its own doctors or nurses; instead it will be left to the US Agency for International Development and the Liberian government to properly staff them. USAID and the US State Department have pledged $10 million towards the training and deployment of 100 volunteer health care workers from African Union member states.

Because they come into regular contact with patients’ bodily fluids, the doctors and nurses who tend to those stricken by Ebola are at great risk of contracting the disease themselves. The WHO reports that as of September 28, at least 216 health care workers have been killed by the virus. Two American health care workers successfully recovered after they were flown to US hospitals where they were quarantined and treated.

The main purpose of this military operation is not to halt the spread of Ebola or restore health to those that have been infected. Rather the United States is seeking to exploit the crisis to establish a firm footing on the African continent for AFRICOM, which was established in 2008 in order to oversee US imperialist operations in the region. AFRICOM currently operates from Kelley Barracks in Stuttgart, Germany, thousands of miles from the nearest African country.

Liberia is the only country in Africa which has previously expressed interest in hosting AFRICOM headquarters. The Ebola epidemic provides a convenient excuse for the deployment of thousands of US troops and establishing a permanent presence.

US President Barack Obama announced on September 16 that a Joint Force Command Headquarters (JFCH) would be established in Liberia to coordinate and oversee Operation United Assistance. The JFCH would be the first significant base operated by AFRICOM on the continent.

Liberia is the latest in a long line of African countries where the United States has sent American military personnel and equipment in the last decade. American troops have been deployed to Kenya, the Democratic Republic of Congo, Central African Republic, Chad, Burkina Faso, Djibouti, Ethiopia, Mali, Niger, Nigeria, Somalia, Uganda, and South Sudan. AFRICOM’s first significant operation on the African continent was the US-NATO bombing of Libya in 2011, which resulted in the overthrow and murder of Muammar Gaddafi.

The longer the epidemic goes on, the greater the chance that the disease will spread to countries beyond West Africa. This is illustrated quite clearly by the spread of the virus to the United States, which demonstrates that even the health system in an advanced country is vulnerable—to say nothing of the gaps created by long-term cutbacks in health services, particularly in public health systems.

The first confirmed case of Ebola in the US was in a man who exhibited symptoms after traveling to Dallas, Texas from Liberia, where he had helped transport another person suffering from the virus to the hospital. Thomas Eric Duncan was sent home after his initial examination, the result of an apparent computer error, further exposing his friends and family to the virus. The apartment complex where he lived has been quarantined and those he came into contact with are being monitored for symptoms.

Hospitals in the US have been proceeding with extreme caution, quarantining anyone exhibiting Ebola symptoms, including two people in Kentucky and a child in Utah who were eventually cleared. It was reported on Friday that two individuals in Washington, D.C. were being treated under quarantine for Ebola-like symptoms.

In the week since Duncan was diagnosed, the American media has focused largely on sensationalized reporting around his case, hyping the dangers to the public as a means of justifying tighter security measures against immigrants and visitors from Africa. Meanwhile, relatively little attention is being given to the affected region in Africa, where dozens are dying every day.