ICC Rules Out Investigation into Israeli Raid on Gaza-Bound Flotilla

Agence France-Presse at The Hague – The Guardian 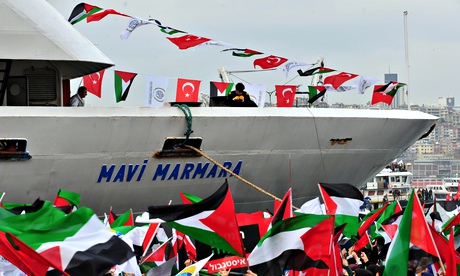 The Mavi Marmara arrives in Istanbul in December 2010. The Israeli navy raided the vessel, part of a flotilla of aid ships bound for Gaza, killing several passengers. Photograph: AFP/Getty

The international criminal court (ICC) will not prosecute over Israel’s raid on a Gaza-bound flotilla in 2010, in which 10 Turkish activists died, despite a “reasonable basis to believe that war crimes were committed”.

The chief prosecutor, Fatou Bensouda, said there would be no investigation leading to a potential prosecution because the alleged crimes, including the killing of 10 activists by Israeli commandos, were not of “sufficient gravity”.

“The information available provides a reasonable basis to believe that war crimes were committed on board the Comorian-registered vessel, the Mavi Marmara, during the interception of the flotilla,” Bensouda said on Thursday. “However, after carefully assessing all relevant considerations, I have concluded that the potential cases likely arising from an investigation into this incident would not be of ‘sufficient gravity’ to justify further action by the ICC.”

Nine Turkish nationals died when Israeli commandos staged a botched a raid on a six-ship flotilla seeking to break Israel’s naval blockade of the Gaza Strip on 31 May 2010. A 10th activist later died of his wounds.

Israel imposed its blockade on Gaza in 2006 after militants seized an Israeli soldier, who was eventually freed in 2011 in a trade for 1,000 Palestinian prisoners held by Israel.

The blockade was strengthened in 2007, when the Islamist Hamas movement took control of Gaza, then eased somewhat after an international outcry over the killing of the Turkish activists.

The maritime assault severely damaged relations between the former regional allies Israel and Turkey, with Ankara demanding a formal apology and compensation for the families of the raid victims, as well as the lifting of the blockade. Israel has refused to comply.