Lame Duck Out of the Silk Road Caravan 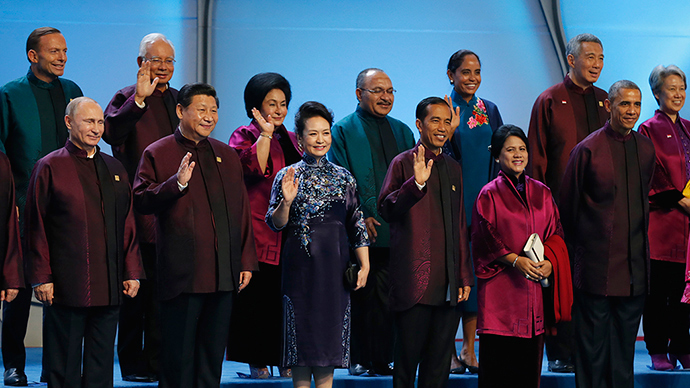 There’s hardly a more graphic illustration of where the multipolar world is going than what just happened at the Asia-Pacific Economic Cooperation (APEC) summit in Beijing.

Take a very good look at the official photos. This is all about positioning – and this being China, pregnant with symbolic meaning. Guess who’s in the place of honor, side by side with President Xi Jinping. And guess where the lame duck leader of the “indispensable nation” has been relegated. The Chinese can also be masters at sending a global message.

When President Xi urged APEC to “add firewood to the fire of the Asia-Pacific and world economy,” this is what he meant, irrespective of inconclusive decisions out of the summit.

1) Beijing will go no holds barred for the Free Trade Area of the Asia-Pacific (FTAAP) – the Chinese vision of an “all inclusive, all-win” trade deal that really promotes Asia-Pacific cooperation, instead of the US-driven, corporate-redacted, and quite divisive Trans-Pacific Partnership (TPP).

2) The blueprint is on for “all-round connectivity,” in Xi’s words – which implies Beijing setting up the Asian Infrastructure Investment Bank; Beijing and Moscow committing to a second mega gas deal – this one through the Altai pipeline in Western Siberia; and China already funneling no less than $40 billion to start building the Silk Road Economic Belt and the 21st Century Maritime Silk Road. 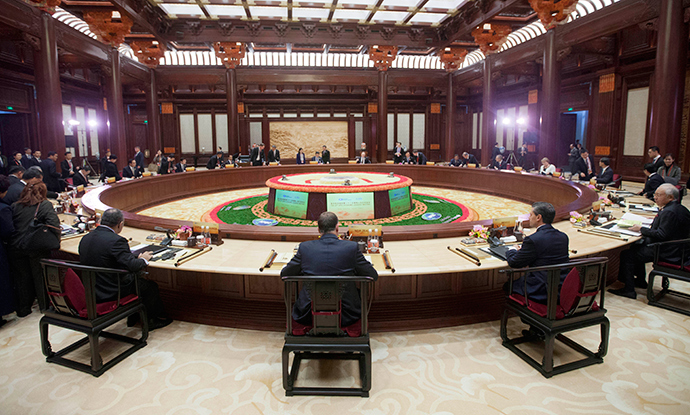 Once again, everything converges towards the most spectacular, ambitious and wide-ranging pluri-national infrastructure offensive ever attempted: the multiple New Silk Roads – a complex network of high-speed rail, pipelines, ports, fiber optic cables and state of the art telecom that China is already building through the Central Asian -stans, linked to Russia, Iran, Turkey and the Indian Ocean, and branching out to Europe all the way to Venice and Berlin.

That’s Beijing interlinking Xi’s “Asia-Pacific Dream” way beyond East Asia, with eyes set on pan-Eurasia trade – with the center being, what else, the Middle Kingdom.

The “Go West” campaign was officially launched in China in the late 1990s. The New Silk Roads are a turbocharged “Go West” – and “Go South” – expanding markets, markets, markets. Think of near future Eurasia as a massive Chinese Silk Belt – in some latitudes in a condominium with Russia.

You want your war hot or cold?

As Beijing dreams, Noam Chomsky has been very vocal about a 1914-style chain reaction of catastrophic blunders – by the West – that could fast spin out of control; and the stakes, once again, are nuclear. Moscow absolutely abhors this gruesome possibility – and that explains why Russia, under relentless US provocation, as well as sanctions, has exercised titanic restraint. Not only can Russia not be “isolated” as the US attempted with Iran; Moscow also called the US neo-cons’ bluff in Ukraine.

At the Valdai Club meeting in Sochi, President Putin, in a crucial speech (text plus Q&A) obviously ignored by Western corporate media, drew the necessary conclusions. The Washington/Wall Street elites have absolutely no intention of allowing a minimum of multipolarity in international relations. What’s left is chaos. That’s what I’ve been arguing, over different strands, during the Obama administration years, and is at the center of my new book “Empire of Chaos”.

Moscow knows all about the complex interlinks with Europe – especially Germany – and with the still fading, but still influential, Washington Consensus. And yet Russia holds the trump card of being a Eurasian power; when in trouble, there could always be a pivoting to Asia.

Gorbachev was spot on in Berlin when he stressed how, breaking the promise personally made to him by Bush the father, NATO embarked on an eternal eastward expansion; and how the West – essentially the US plus a few European vassals – now seems obsessed in launching a new cold war, with the new Berlin Wall – metaphorically – transplanted to Kiev. 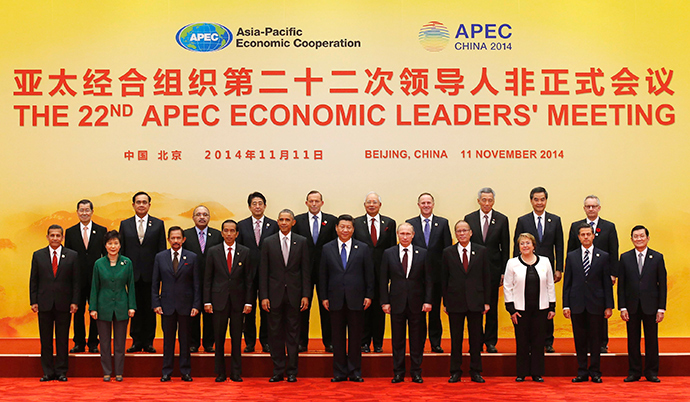 Moscow pivoting away from the West and towards East Asia is a process developing on many levels – and for months now, for all to see. Acres of forest can be further devastated to print how the outcome has been directly influenced by Barack Obama’s self-described “Don’t Do Stupid Stuff” foreign policy doctrine, which he christened aboard Air Force One when coming from a trip to – once again – Asia last April.

Now mix these key developments with the massive yuan-ruble energy double deal, and the picture is of Russia actively protecting itself from speculative/politically motivated Western attacks against its currency.

The Russia-China symbiosis/strategic partnership visibly expands on energy, finance and, also inevitably, on the military technology front. That includes, crucially, Moscow selling Beijing the S-400 air defense system and, in the future, the S-500.

The S-500 system can intercept any American ICBMs or cruise missiles, while the Russian ICBMs deployed at Mach 17, equipped with MIRVs, are simply unbeatable. Beijing, for its part, is already developing its own surface-to-ship missiles that can take out everything the US Navy can muster – from aircraft carriers to submarines and mobile air defense systems.

Strategically, Beijing and Washington could not but be polar opposites in what I called the birth of the Eurasian century.

Beijing has clearly identified Washington/Wall Street fighting to the death to preserve the short unipolar moment. China – and the BRICS – is working towards what Xi defined as a “new model of great power relations.” The Washington/Wall Street mindset is “either/or” instead of “win-win”; the self-appointed Masters of the Universe believe they can always monopolize the loot because Russia – and then China – eventually will back down to avoid confrontation. This is the key aspect of Asia-Pacific today somewhat resembling 1914 Europe.

With this kind of stuff passing for “analysis” in US academic circles, and with the Washington/Wall Street elites through their myopic Think Tank land still clinging to mythical platitudes such as the “historical” American role as arbiter of modern Asia and key balancer of power, no wonder public opinion in the West cannot even imagine the impact of the New Silk Roads in the geopolitics of the young 21st century.

A quarter of a century after the fall of the Berlin Wall the US, for all practical purposes, is run by an oligarchy. Europe is geopolitically irrelevant. “Democracy” has been degraded to self-parody in most of the West. “Humanitarian” – as well as neo-con – imperialism in Iraq, Libya, Syria, and beyond has led to disaster after disaster. Financial turbo-capitalism is a time bomb.

Russia and China may not be proposing an alternative system – yet. Still, as the dogs of war, of hate, of inequality – bark, the China-Russia caravan passes. The caravan is selling Eurasia economic integration – not bombs. Real Asia-Pacific integration may still be a long dream away. Yet what APEC has shown – graphically – once again is the spectacular implosion, in slow motion, of the former indispensable nation’s geopolitical dominance.