While Congress may soon debate the ongoing US wars in Iraq and Syria, a new FAIR study shows that at the critical moments leading up to the escalation of US military action, mainstream media presented almost no debate at all.

The study of key TV news discussion programs from September 7 through 21 reveals that guests who opposed war were scarce. 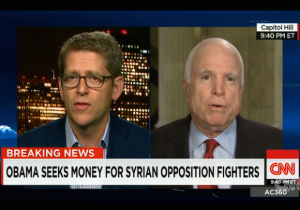 The study period covered what should have been a moment of serious debate: From the release of ISIS video beheadings of two American journalists through Obama’s September 10 televised address and right up to the first US airstrikes on Syria.

But the question of whether to launch attacks was hardly worth debating. As MSNBC host Chris Matthews put it (9/9/14): “When it comes down to how we fight this, everybody seems to be for air attacks, airstrikes. Everybody is for drone attacks.”

One would definitely get that impression from the narrow debate in elite media.

The study appears in the November issue of FAIR’s magazine Extra!