The Commons and Defending the Public 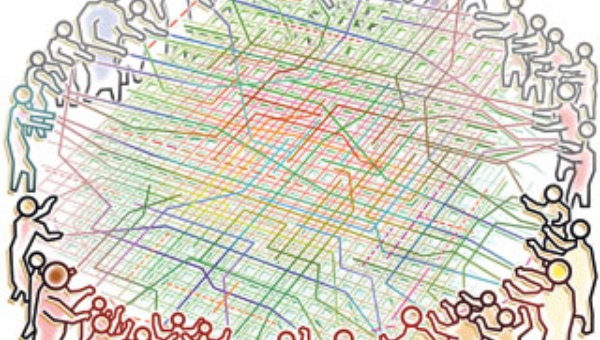 Can one move from public to commons by going through the state?

The language of Commons is increasingly being used by autonomists and state socialists alike. I find this both exciting and potentially unifying as far as diverse positions finding some common ground, as well as disconcerting. I experienced a recent example of both of these things at a gathering on the topic of the struggle for the Commons in Europe. One of the debates to emerge, and that was left open, was the difference between commons and the public, and more specifically the question of if defending the public could be seen as a part of creating and deepening the commons.

By commons I refer to concepts developed by Peter Linebaugh, Silvia Federici and Massimo De Angelis, among others. De Angelis, a scholar, activist and editor of The Commoner.org writes, “Commons suggest alternative, non-commodified means to fulfill social needs, e.g. to obtain social wealth and to organise social production. Commons are necessarily created and sustained by communities, i.e. by social networks of mutual aid, solidarity, and practices of human exchange that are not reduced to the market form. The “place” of these networks does not need to be tied to locality, but communities can operate both in local and through trans-local places. Also, as our movements have shown, communities cannot be separated from the learning practices of direct democracy, horizontality, participation and inclusiveness that are the power to decide what are the goals and modalities of social production.”

The gathering I participated in was sponsored in part by the Transform Network in France, with the co-organizational support of an independent organizer of the more autonomist persuasion. The rubric was “Commons” so we all spoke about our movement and project experiences with this in mind and vision. The organizers from Transform brought together quite a few socialists and people coming from either a party or trade union perspective, all with a critique of bureaucracy and looking towards new forms of organization – together with another two dozen people coming out of the new practices and movements, from the Plenums in Bosnia to the 15M and housing defense movements throughout Europe, all generally not having the state, party or union as the organizational point of departure for change.

One of the biggest areas of theoretical and practical debate was the question of the difference in defending the public, meaning services and spaces in the public sphere controlled by governments, such as parks, health care, education etc. and the defense and construction of the commons. For example, a number of people spoke about the need to defend health care as a right and something that must remain public and not private. It was not until a person from Greece spoke about the alternative ways they are conceiving of and practicing health care that the conversation of health care as commons was raised in a concrete way. The woman from Greece who spoke did so from the position of having been participating in one of the thirty solidarity clinics developed over the past seven years. She spoke about how the clinics not only provide free health care to those who have lost access, but how they have a different way of thinking about health and heath care – basing it in horizontal assemblies, breaking down hierarchies between patients and medical professionals, and seeing health as an overall question, not a sum of body parts. All decisions related to the running of the clinics are made by the assemblies, comprised of those who volunteer in the clinics and if desired, those receiving care from them. This explanation of the health care being developed fell in her and others opinions in the realm of commons, or to borrow from Peter Linebaugh, commoning. One of the challenges they are facing currently is that the Greek state might now offer health care free of cost again. If this happens, the clinics will need to decide if they will continue running clinics in the way they are – horizontally and as commons – or if they will defend the idea that they go public and shift their forms of organization. There is a forthcoming assembly of the networks of clinics to decide this question. The question arises then of where the common and the public meet and how do we defend one while constructing the other? Is it contradictory to defend the public while desiring the common? Will this be possible in the case of solidarity clinics in Greece?

Another example was raised by participants from two different Italian recuperated workplaces, RiMaflow outside Milan and Officine Zero in Rome. Both are workplaces abandoned by the former owner, taken over by the workers and community and put under collective production. These experiences are clearly more along the commoning line as there is not a demand to create more jobs from the state or government or to put the workplaces under national control, but instead the workers together with people in the surrounding communities (not necessarily pre-organized political communities, but rather those people who support the workplaces becoming the political community) are putting the factories into production again. Not only have they put the workplaces under worker control, using horizontal assemblies and equal pay distribution, but they have shifted what is being produced to more ecological products, such as refurbishing large electronics (washing machines, computers etc.) instead of producing car parts, as in the case of RiMaflow. A question and debate related to the recuperated workplaces, as raised here, as well as generally, is if it is useful if the state offers to put them under national control, as is the case with FaSinPat (formerly Zanon) in Argentina. Again the question of control over ultimate decision making is at the fore. Can something be administered by a collective and yet under state control at the same time and still considered a common?

The cases of the Plataforma de Afectados por la Hipoteca (Platform for those Affected by Mortgages – PAH) and Ganemos from Spain, both coming out of the 15M, were discussed by participants in those movements and each raised yet more questions about the public and commons. The PAH is a network of over 260 groups of people directly affected by the mortgage crisis who defend one another against evictions using direct actions and organize in assemblies. While they began a few years earlier the 15M movement was a spark that then ignited what is now a massive movement and network. The PAH no longer only defends people from eviction but also has taken over homes, buildings and in a few cases many adjacent buildings, creating homes for hundreds if not thousands of families. This is a clear case of creating commons – something that should be for all and literally breaking down the walls that are the enclosures. They also organize in horizontal assemblies, where each affected person has an equal say in what is done and how. The challenge arises with the fact that there are some in the PAH who are participating in Ganemos the recently formed left political party. By seeking electoral solutions, particularly as they relate to housing, the movement is then taking what they are creating as commons and asking that they become public, or at least defended by the local and national governments as something public. Is this possible? Can a common be defended by the state? Can it be facilitated by the sate? This is even more true with the Madrid based electoral movement/party, Ganemos, from which there was also a participant at the conference who explicitly argued for the public and need to not only defend the public, but take over those institutions that exist so as to make them public. It was unclear how by taking over institutions and making them public they would then be moved into the commons, though that was the position being argued.

For me this then brings us to the heart of the questions. Can one move from public to commons by going through the state? At this conference the responses generally fell along two lines, those from the more traditional socialist groups still saw the state as the means to defend the public or even what they were referring to as commons. While many, though not all, of the others present, coming from the newer movements such as the recuperations, autonomous health clinics and sites of popular education and community gardens argued that these spaces being developed must remain autonomous so as to expand and connect with one another. The argument is also that if they are to become public then the question of control shifts and the innovation falls aside as they are then controlled by the old state and bureaucratic forms.

The gathering ended with this as an open question. For me they are two different things. One must defend the public, but only as an emergency measure, we must take over those services and spaces that are public and private and collectively create commons, running them substantially differently, in form and content. At the same time we need to be creating commons and communing everywhere we can, expanding these practices, linking them, and creating something else – something different – not something that will yet again fall into the administrative and political hands of the state.

Marina Sitrin is a writer, lawyer, teacher, organizer, militant and dreamer. She is the editor of Horizontalism: Voices of Popular Power (2005) and Everyday Revolutions: Horizontalism & Autonomy in Argentina (2012). Together with Dario Azzellini she co-authored They Can’t Represent US! Reinventing Democracy From Greece to Occupy (2014) and Occupying Language: The Secret Rendezvous with History and the Present (2012).