22 Nov 2014 – A Russian proposal condemning all glorification of Nazi ideology and denial of Nazi war crimes was passed by the UN General Assembly. Of the 173 countries voting, 115 said yes and 55 abstained. The only three countries to vote against: United States, Canada, and Ukraine. 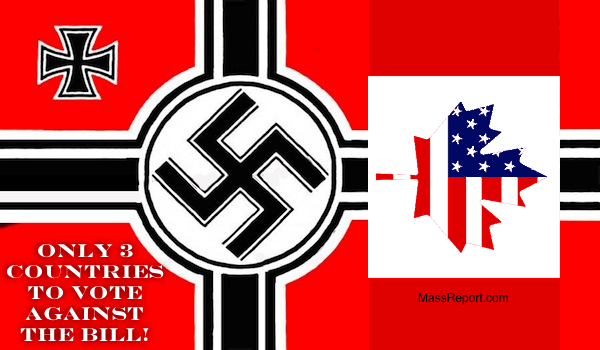 Racism has been on a steady comeback for the last couple years. It didn’t necessarily ever go away, but the current spike in hate crime statistics is making it even more of an apparent issue.

In addition to condemning Nazi ideals and denial of crimes, the resolution also targets the depiction of Nazi’s as fighters for nationalist movements. This could create the image of heroes, which the document aims to avoid.

The Russian Foreign Ministry stated after the vote:

“Ukraine’s position is particularly dispiriting and alarming. One can hardly understand how a country, the people of which suffered their full share of the horrors of Nazism and contributed significantly to our common victory against it, can vote against a resolution condemning its glorification.”

However, according to Kiev’s representative Andrey Tsymbalyuk, the Ukraine does indeed condemn Nazism and neo-Nazism. However, Ukraine has decided not to support the bill as it has not only faced hardship from Nazism, but from Stalinism as well. According to Tsymbalyuk:

“As long as Stalinism and neo-Stalinism are not condemned as strongly as Nazism, neo-Nazism and other forms of hatred, Ukraine would not be able to back this document.”

This seems to be appropriate in principle from where I sit. However, we’ve yet to hear good reason that the U.S. does not support it. The U.S. has signed the resolution, however, it is not recognized in the states as an enforceable document.

Why do you think the U.S. rejected Russia’s proposal?