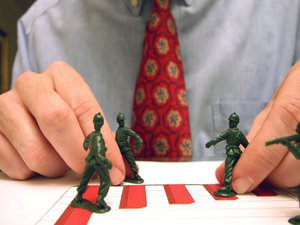 All governments past and present, regardless of their formal organization, involve the rule of the many by the few. In other words, all governments are fundamentally oligarchic. The reasons are twofold. First, governments are nonproductive organizations and can only subsist by extracting goods and services from the productive class in their territorial domain. Thus the ruling class must remain a minority of the population if they are to continually extract resources from their subjects or citizens. Genuine “majority rule” on a permanent basis is impossible because it would result in an economic collapse as the tribute or taxes expropriated by the more numerous rulers deprived the minority engaged in peaceful productive activities of the resources needed to sustain and reproduce itself. Majority rule would therefore eventually bring about a violent conflict between factions of the previous ruling class, which would terminate with one group establishing oligarchic rule and economically exploiting its former confederates.

The second factor that renders oligarchic rule practically inevitable is related to the law of comparative advantage. The tendency toward division of labor and specialization based on the unequal endowment of skills pervades all sectors of human endeavor. Just as a small segment of the population is adept at playing professional football or dispensing financial advice, so a tiny fraction of the population tends to excel at wielding coercive power. As one writer summed up this Iron Law of Oligarchy: “[In] all human groups at all times there are the few who rule and the many who are ruled.”[1]

The inherently nonproductive and oligarchic nature of government thus ensures that all nations under political rule are divided into two classes: a productive class and a parasitic class or, in the apt terminology of the American political theorist John C. Calhoun, “taxpayers” and “tax-consumers.”

The king and his court, elected politicians and their bureaucratic and special-interest allies, the dictator and his party apparatchiks — these are historically the tax-consumers and, not coincidentally, the war makers. War has a number of advantages for the ruling class. First and foremost, war against a foreign enemy obscures the class conflict that is going on domestically in which the minority ruling class coercively siphons off the resources and lowers the living standards of the majority of the population, who produce and pay taxes. Convinced that their lives and property are being secured against a foreign threat, the exploited taxpayers develop a “false consciousness” of political and economic solidarity with their domestic rulers. An imperialist war against a weak foreign state, e.g., Grenada, Panama, Haiti, Iraq, Afghanistan, Iran, etc., is especially enticing to the ruling class of a powerful nation such as the United States because it minimizes the cost of losing the war and being displaced by domestic revolution or by the rulers of the victorious foreign state.

A second advantage of war is that it provides the ruling class with an extraordinary opportunity to intensify its economic exploitation of the domestic producers through emergency war taxes, monetary inflation, conscripted labor, and the like. The productive class generally succumbs to these increased depredations on its income and wealth with some grumbling but little real resistance because it is persuaded that its interests are one with the war makers. Also, in the short run at least, modern war appears to bring prosperity to much of the civilian population because it is financed in large part by money creation.

We thus arrive at a universal, praxeological truth about war. War is the outcome of class conflict inherent in the political relationship — the relationship between ruler and ruled, parasite and producer, tax-consumer and taxpayer. The parasitic class makes war with purpose and deliberation in order to conceal and ratchet up their exploitation of the much larger productive class. It may also resort to war making to suppress growing dissension among members of the productive class (libertarians, anarchists, etc.) who have become aware of the fundamentally exploitative nature of the political relationship and become a greater threat to propagate this insight to the masses as the means of communication become cheaper and more accessible, e.g., desktop publishing, AM radio, cable television, the Internet, etc. Furthermore, the conflict between ruler and ruled is a permanent condition. This truth is reflected — perhaps half consciously — in the old saying that equates death and taxes as the two unavoidable features of the human condition.

Thus, a permanent state of war or preparedness for war is optimal from the point of view of the ruling elite, especially one that controls a large and powerful state. Take the current US government as an example. It rules over a relatively populous, wealthy, and progressive economy from which it can extract ever larger boodles of loot without destroying the productive class. Nevertheless, it is subject to the real and abiding fear that sooner or later productive Americans will come to recognize the continually increasing burden of taxation, inflation, and regulation for what it really is — naked exploitation. So the US government, the most powerful mega-state in history, is driven by the very logic of the political relationship to pursue a policy of permanent war.

From “The War to Make the World Safe for Democracy” to “The War to End All Wars” to “The Cold War” and on to the current “War on Terror,” the wars fought by US rulers in the twentieth century have progressed from episodic wars restricted to well-defined theaters and enemies to a war without spatial or temporal bounds against an incorporeal enemy named “Terror.” A more appropriate name for this neoconservative-contrived war would involve a simple change in the preposition to a “War of Terror” — because the American state is terrified of productive, work-a-day Americans, who may someday awaken and put an end to its massive predations on their lives and property and maybe to the American ruling class itself.

In the meantime, the War on Terror is an open-ended imperialist war the likes of which were undreamt of by infamous war makers of yore from the Roman patricians to German National Socialists. The economist Joseph Schumpeter was one of the few non-Marxists to grasp that the primary stimulus for imperialist war is the inescapable clash of interests between rulers and ruled. Taking an early mega-state, Imperial Rome, as his example, Schumpeter wrote:

Here is the classic example … of that policy which pretends to aspire to peace but unerringly generates war, the policy of continual preparation for war, the policy of meddlesome interventionism. There was no corner of the known world where some interest was not alleged to be in danger or under actual attack. If the interests were not Roman, they were those of Rome’s allies; and if Rome had no allies, then allies would be invented. When it was utterly impossible to contrive such an interest — why, then it was national honor that had been insulted. The fight was always invested with an aura of legality. Rome was always being attacked by evil minded neighbors, always fighting for a breathing space. The whole world was pervaded by a host of enemies, and it was manifestly Rome’s duty to guard against their indubitably aggressive designs. They were enemies who only waited to fall upon the Roman people. [No] attempt [can] be made to comprehend these wars of conquest from the point of view of concrete objectives. … Thus there is but one way to an understanding: scrutiny of domestic class interests, the question of who stood to gain. … Owing to its peculiar position as the democratic puppet of ambitious politicians and as the mouthpiece of a popular will inspired by the rulers [the Roman proletariat] did indeed get the benefit of the [war] booty. So long as there was good reason to maintain the fiction that the population of Rome constituted the Roman people and could decide the destinies of the empire, much did depend on its good temper. … But again, the very existence, in such large numbers, of this proletariat, as well as its political importance, was the consequence of a social process that also explains the policy of conquest. For this was the causal connection: The occupation of public land and the robbery of peasant land formed the basis of a system of large estates, operating extensively and with slave labor. At the same time the displaced peasants streamed into the city and the soldiers remained landless — hence the war policy.

This lengthy quotation from Schumpeter vividly describes how the expropriation of peasants by the ruling aristocracy created a permanent and irreparable class division in Roman society that led to a policy of unrestrained imperialism and perpetual war. This policy was designed to submerge beneath a tide of national glory and war booty the deep-seated conflict of interests between expropriated proletarians and landed aristocracy.

Schumpeter’s analysis explains the particularly strong propensity of democratic states to engage in imperialist war making and why the Age of Democracy has coincided with the Age of Imperialism. The term “democratic” is here being used in the broad sense that includes “totalitarian democracies” controlled by “parties” such as the Nationalist Socialist Workers Party in Germany and the Communist Party in the Soviet Union. These political parties, as opposed to purely ideological movements, came into being during the age of nationalist mass democracy that dawned in the late nineteenth century.[2]

Because the masses in a democratic polity are deeply imbued with the ideology of egalitarianism and the myth of majority rule, the ruling elites who control and benefit from the state recognize the utmost importance of concealing its oligarchic and exploitative nature from the masses. Continual war making against foreign enemies is a perfect way to disguise the naked clash of interests between the taxpaying and tax-consuming classes.

Joseph Salerno is academic vice president of the Mises Institute, professor of economics at Pace University, and editor of the Quarterly Journal of Austrian Economics. He has been interviewed in the Austrian Economics Newsletter and on Mises.org. Send him mail. See Joseph T. Salerno’s article archives.

Adapted from “Imperialism and the Logic of War Making.”