A Life Worth Living: Albert Camus on Our Search for Meaning and Why Happiness Is Our Moral Obligation

Why “the demand for happiness and the patient quest for it” isn’t a luxury or a mere need but our existential duty. 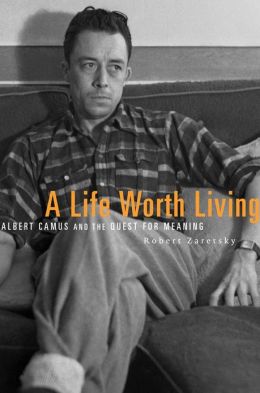 “To decide whether life is worth living is to answer the fundamental question of philosophy,” Albert Camus wrote in his 119-page philosophical essay The Myth of Sisyphus in 1942. “Everything else … is child’s play; we must first of all answer the question.” One of the most famous opening lines of the twentieth century captures one of humanity’s most enduring philosophical challenged — the impulse at the heart of Seneca’s meditations on life and Montaigne’s timeless essays and Maya Angelou’s reflections, and a wealth of human inquiry in between. But Camus, the second-youngest recipient of the Nobel Prize in Literature after Rudyard Kipling, addressed it with unparalleled courage of conviction and insight into the irreconcilable longings of the human spirit.

In the beautifully titled and beautifully written A Life Worth Living: Albert Camus and the Quest for Meaning (public library | IndieBound), historian Robert Zaretsky considers Camus’s lifelong quest to shed light on the absurd condition, his “yearning for a meaning or a unity to our lives,” and its timeless yet increasingly timely legacy:

If the question abides, it is because it is more than a matter of historical or biographical interest. Our pursuit of meaning, and the consequences should we come up empty-handed, are matters of eternal immediacy.

Camus pursues the perennial prey of philosophy — the questions of who we are, where and whether we can find meaning, and what we can truly know about ourselves and the world — less with the intention of capturing them than continuing the chase. 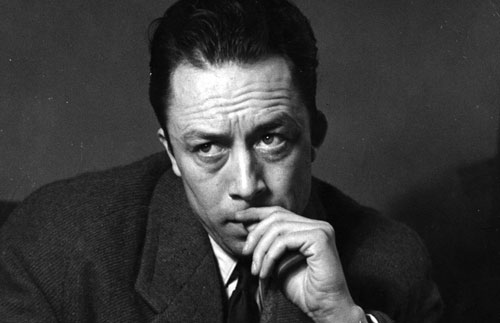 Reflecting on the parallels between Camus and Montaigne, Zaretsky finds in this ongoing chase one crucial difference of dispositions:

Camus achieves with the Myth what the philosopher Maurice Merleau-Ponty claimed for Montaigne’s Essays: it places “a consciousness astonished at itself at the core of human existence.”

For Camus, however, this astonishment results from our confrontation with a world that refuses to surrender meaning. It occurs when our need for meaning shatters against the indifference, immovable and absolute, of the world. As a result, absurdity is not an autonomous state; it does not exist in the world, but is instead exhaled from the abyss that divides us from a mute world.

Camus himself captured this with extraordinary elegance when he wrote in The Myth of Sisyphus:

This world in itself is not reasonable, that is all that can be said. But what is absurd is the confrontation of this irrational and wild longing for clarity whose call echoes in the human heart. The absurd depends as much on man as on the world. For the moment it is all that links them together.

To discern these echoes amid the silence of the world, Zaretsky suggests, was at the heart of Camus’s tussle with the absurd:

We must not cease in our exploration, Camus affirms, if only to hear more sharply the silence of the world. In effect, silence sounds out when human beings enter the equation. If “silences must make themselves heard,” it is because those who can hear inevitably demand it. And if the silence persists, where are we to find meaning?

This search for meaning was not only the lens through which Camus examined every dimension of life, from the existential to the immediate, but also what he saw as our greatest source of agency. In one particularly prescient diary entry from November of 1940, as WWII was gathering momentum, he writes:

Understand this: we can despair of the meaning of life in general, but not of the particular forms that it takes; we can despair of existence, for we have no power over it, but not of history, where the individual can do everything. It is individuals who are killing us today. Why should not individuals manage to give the world peace? We must simply begin without thinking of such grandiose aims. 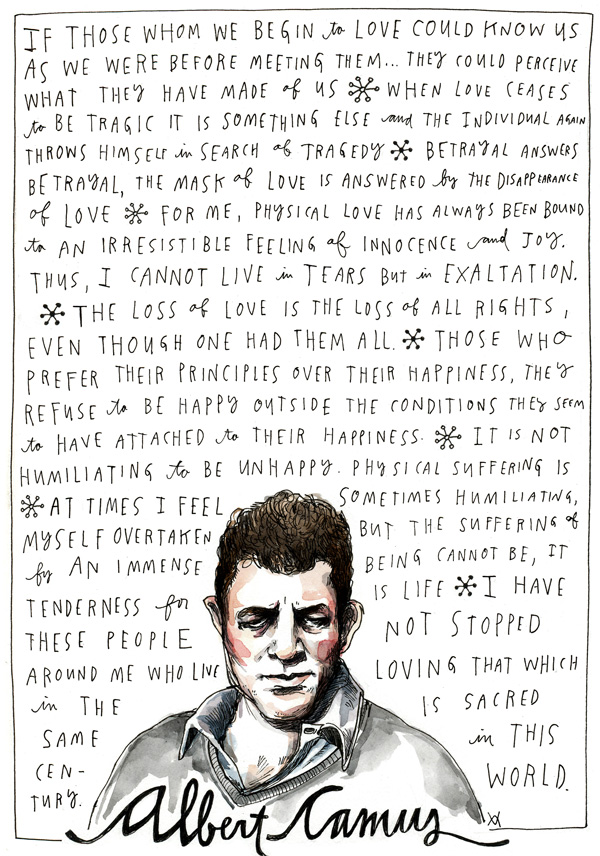 Illustration by Wendy MacNaughton based on my highlights from Albert Camus’s journals.

For Camus, the question of meaning was closely related to that of happiness — something he explored with great insight in his notebooks. Zaretsky writes:

Camus observed that absurdity might ambush us on a street corner or a sun-blasted beach. But so, too, do beauty and the happiness that attends it. All too often, we know we are happy only when we no longer are.

Perhaps most importantly, Camus issued a clarion call of dissent in a culture that often conflates happiness with laziness and championed the idea that happiness is nothing less than a moral obligation. A few months before his death, Camus appeared on the TV show Gros Plan. Dressed in a trench coat, he flashed his mischievous boyish smile and proclaimed into the camera:

Today, happiness has become an eccentric activity. The proof is that we tend to hide from others when we practice it. As far as I’m concerned, I tend to think that one needs to be strong and happy in order to help those who are unfortunate.

This wasn’t a case of Camus arriving at some mythic epiphany in his old age — the cultivation of happiness and the eradication of its obstacles was his most persistent lens on meaning. More than two decades earlier, he had contemplated “the demand for happiness and the patient quest for it” in his journal, capturing with elegant simplicity the essence of the meaningful life — an ability to live with presence despite the knowledge that we are impermanent:

[We must] be happy with our friends, in harmony with the world, and earn our happiness by following a path which nevertheless leads to death. 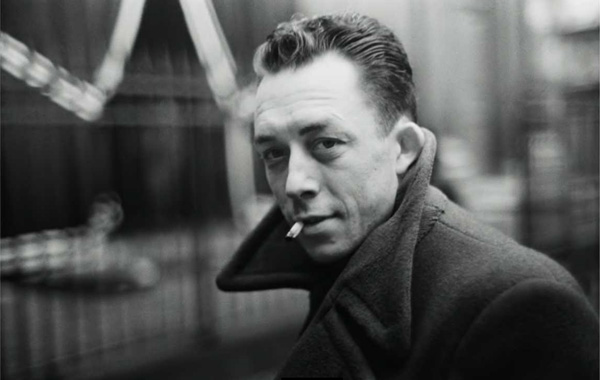 But his most piercing point integrates the questions of happiness and meaning into the eternal quest to find ourselves and live our truth:

It is not so easy to become what one is, to rediscover one’s deepest measure.

A Life Worth Living: Albert Camus and the Quest for Meaning comes from Harvard University Press and is a remarkable read in its entirety. Complement it with Camus on happiness, unhappiness, and our self-imposed prisons, then revisit the story of his unlikely and extraordinary friendship with Nobel-winning biologist Jacques Monod.