The West’s failure at the G20 has been concealed from the European and US populations through a vast propaganda offensive which spotlighted Putin being scoffed by his peers over his Ukraine politics. However, it must be noted that the name of Ukraine was not even once pronounced during the summit. The Atlanticist propaganda created a confusion between the aggressive statements made by Western leaders on the sidelines of the summit and the summit itself. 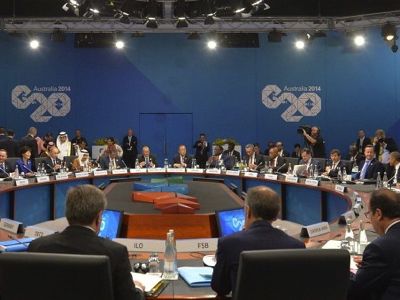 At no time did the NATO states at the G20 dare to broach the Ukraine problem.

According to the image portrayed by the media, Putin was pushed against the ropes by Obama in Beijing as in Brisbane, and forced to leave the G20 abruptly. What happened is exactly the opposite. In Beijing for the Apec summit, Obama signed an agreement with China, more nebulous than “historic,” which aims at reducing emissions of greenhouse gases by 2030. Altogether, Putin has concluded with China 17 operational agreements of strategic importance. Above all, the one ensuring China with a thirty-year supply of 30 to 40 billion cubic meters of natural gas through an energy corridor from western Siberia to northwestern China. Once completed, China will become the largest importer of Russian gas.

Other agreements were signed on joint energy projects in the Arkhangelsk region and in Russia‘s Far East. Russia’s largest energy companies -Gazprom, Rosneft and Lukoil- are about to list their shares on the Hong Kong Stock Exchange, not in dollars but in Asian currencies: Chinese yuan, Hong Kong dollar, Singapore dollar. The process of de-dollarization of foreign trade, the obsessive fear of the United States, reached a new level with the Agreement between the Russian Central Bank and the People’s Bank of China. In addition, the Exim Bank, which finances China’s export-import business, has invested in those Russian banks -Vnesheconombank, Vtb and Rosselkhozbank- which have been targeted by US and European Union sanctions.

Another important agreement concerns the implementation of major high-tech parks in both countries, designed in particular for the development of the Russian Glonass and Chinese Beidou worldwide satellite navigation systems, alternatives to the U.S. GPS: in this context, China already hosts several Glonass ground stations.

The current Chief of the General Staff of the Russian Armed Forces, Valery Gerasimov, also announced that the two governments have reached an agreement on “many military cooperation projects.” One of them is the Chinese J-31 stealth fighter, analogous to the U.S. F-35, which is equipped with Russian engines, and was shown in flight at the Aerospace Exhibition in the southern Chinese city of Zuhai, during President Obama’s presence in Beijing.

The ties between the two countries “constitute an irreversible trend,” said President Xi Jinping at his tenth meeting with President Putin since he assumed office in March 2013. For proof of this, the two presidents announced that China and Russia will jointly celebrate, in 2015, the 70th anniversary of the victory of World War II. A similar climate reigned in Brisbane, Australia, host to an inconclusive G20 summit, which set the goal of achieving a 2.1% increase in global growth by 2018 (the statistical average between China’s GDP which increases by 8% per year and that of Italy which has virtually ground to a halt). The most important event took place in Brisbane, on the sidelines of the G20, at the meeting of Heads of State and Government of the BRICS countries: Brazil, Russia, India, China and South Africa. Their total GDP, adjusted for purchasing power, is higher than that of the G7. These countries account for over 20% of global gross production and trade, not to mention the trade between the BRICS countries, which has doubled in five years, reaching $ 300 billion. In Brisbane, the five leaders confirmed the creation of a BRICS Development Bank with a capital of $ 100 billion (41 of which will be contributed by China) and a Reserve Fund consisting of an additional 100 billion to provide further liquidity to member countries.

The “U.S. leadership in the Asia / Pacific region,” proclaimed by Obama in Brisbane, must come to grips with a changing world.