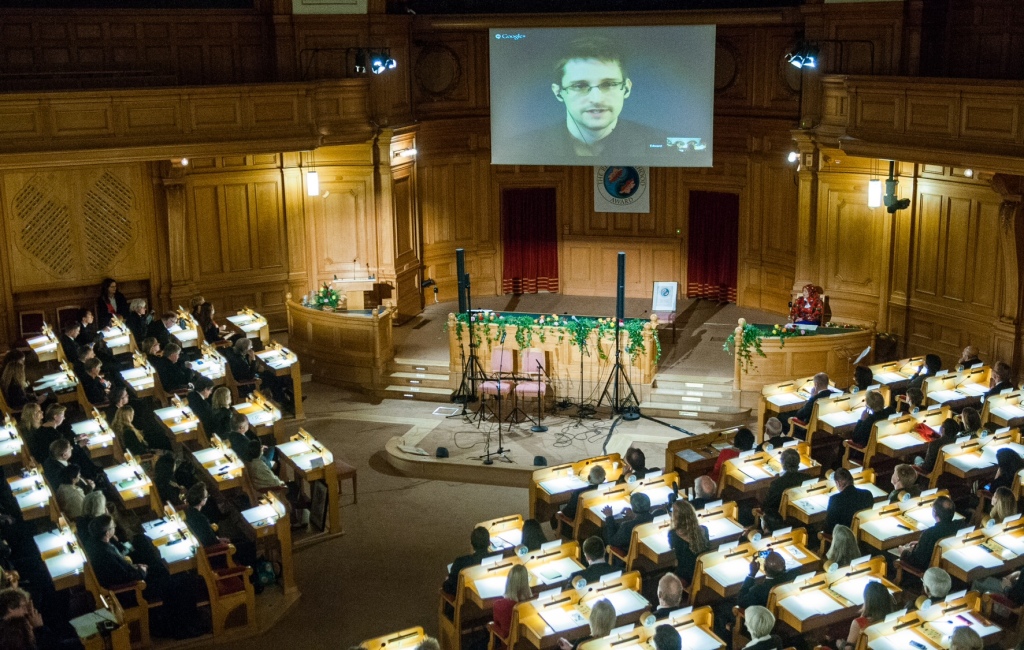 Due to the problematic transmission, few words/ half sentences are inaudible.

Thank you so much.

You know I am far below qualified for this kind of honor. It is an extraordinary privilege to be counted among so many around the world who have fought for human rights even at great personal cost, even when it was hard, even when no one was watching, when they were not seeking recognition and when they never received it. Awards are given to make sure they are recognised individually, but I can only accept it collectively. This award recognises the work of so many – not just in recent years, but over decades, who recognise human right is a new name to an old concept – the concept of liberty and the price of fighting for liberty in changing times, in times of fear, in times of novel danger, new threats, is unpredictable and often quite high.

The journalists that I’ve been privileged to work with, publishers around the world, activists, whistleblowers, civil society broadly, have put so much on the line. There are many, including Sarah Harrison who is in the audience, who are not able to go home. I myself was exiled for more than one year and a half now. And these things are unlikely to change soon but they are worth it. All the prices we paid, all the sacrifices we made – I believe we would do again. I know I will do it because it was never about me. This was more about the society at large, not about he or she (inaudible). This is about us, this is about our rights, this is about the kind of societies we want to live in, the kind of government we want to have and the kind of world that we want to make for the next generation.

And when we talk about government, we need to think not just about the quality of government but the relationships that we have with them. Are we going to be subjects of the government or will we be partner to it? And even with all the brilliant minds that rule now, all the subject matter experts, all the elective officials, all of the representatives of people in industries working on this issue. We cannot make proper decisions if we do nor have all and meaning information. When it comes to governments, to democracies, these institutions are founded on the principle of the consent of the government, and the consent of the people is not meaningful if is not informed.

Now, it is this principle which brought me forward, and when we think about the challenges and the problems that we face, the new atmosphere of fear that all the governments and institutions around the world are operating in, as a response to these threats, and we evaluate how things are going, there is reason to hope. I am optimistic. Because when we take a look at what’s happened since last year, since I came from Hawai, since I stood up, I was called a spy, I was called a traitor. Some of the most important and powerful officials in the United States debated (inaudible) placing me on (inaudible) You had to be attacked by (inaudible). Largely that controversy has ended. Governments that first said that people has no need to know this type of information, that this would put blood on our hands, that newspapers had put lives at risk, that they would bring down airplanes travelling over Europe, which happened. Europe brought down the plane of the president of Bolivia to search it for me, thinking that I might be seeking asylum, though I am not. This does not happen anymore. Instead, (inaudible) we see incredible debates happening in parliaments around the world, happening in newspapers around the world, happening at academic institutions. We see the very fabric of the Internet being changed due to new technological implementations that protect people’s rights, that protect our rights, in a new and meaningful way that crosses borders. It means regardless of how rights are protected in China, if you use a rights-preserving service, you’ll be protecting no matter the laws of that particular jurisdiction. This is an incredible game for human rights around the world.

When we talk about the government institutions and the changes that are happening, these are nowhere more apparent than within the United States itself. The same government that denounced me, that brought free charges against me, including espionage, saying that, you know, I even sold information to our enemies, they say it’s not true and that there is no evidence … (inaudible). The director of the NSA says, in fact, that he doesn’t see the sky falling. The president of the United States of America said that he appointed independent review boards to take a look at these programs of mass surveillance and to see if they (inaudible) and the conclusion of these boards was they were not – that they had never stopped one single imminent terrorist attack. And this is critical, because with large mass surveillance, the policy that was kept from us – not just for Americans, not just from Swedes, but from the world – had not helped us, despite causing so much of a riot. He said the debate that has happened since has not weakened us as a nation. The president said this has made us stronger. This was only the beginning. Since then we’ve seen federal courts rule against these programmes in the United States. We’ve seen the European Court of Justice strike down on the retention director, saying that it was an unnecessary violation of rights, that it would put individuals at unnecessary risk. The United Nations released a report saying that mass surveillance goes against fundamental human rights.

These are things that will be with us. They will be with us in every country. They provide us a foundation on which to build. We can move forward from here as we continue to discuss these policies, these programs that are instituted behind closed doors without our awareness and without our consent to say “are these reasonable? Are they necessary? Are they proportionate to the threats that we face? Do they use the least intrusive means necessary to provide for necessary government investigations?” Because this is not about turning off all the intelligence committees. This is not about stopping police investigations. This is not about reducing our security. This is about securing our society. This is about securing our rights. This is about securing the liberties that we inherit as a generation and that we want our generation behind us to inherit in time.

And together, by using this open forum, by using this discussion, by taking advantage of the sacrifices that so many people around the world have made, we can have those liberties, we can have those freedoms, we can have those rights, we can have an open and liberal society, because we say, even in time of threats, we stand for liberal values and I hope, despite all that we’ve accomplished in the last year, we all recognise this is only the beginning and there’s so much to be done and that together we will achieve it. And I hope I can count on you in the next year as we stand and propose the United Nations create a new special rapporteur on privacy and digital rights to ensure that no matter where the agency operates, no matter where the technology is placed, no matter what country is deciding that they are facing new and novel threats that require new narrowments of our rights, we stand for liberty.

Thank you. Thank you very much.