Great Number of Animals Killed in Hindu Festival in Nepal 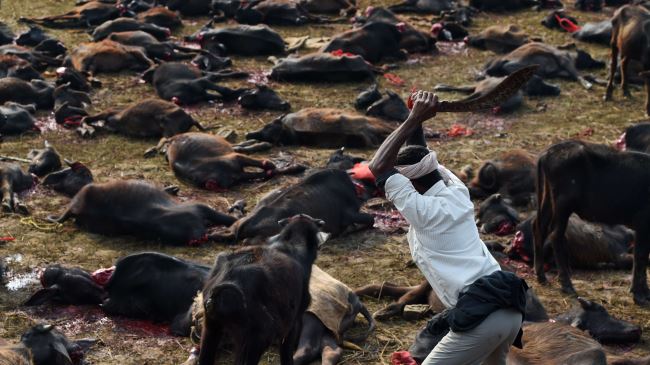 A butcher raises his blade over a buffalo calf before severing its head during a mass slaughter of buffaloes for the Gadhimai festival inside a walled enclosure in Nepal’s village of Bariyapur, near the Indian border, on November 28, 2014.

A great number of birds and other animals are killed during a Hindu festival in Nepal, where worshippers believe the act brings them good luck.

Starting on Friday [28 Nov 2014], tens of thousands of animals are expected to be slaughtered during a two-day festival near the Gadhimai temple in the Nepalese jungles of Bara district, about 160 kilometers (100 miles) south of the capital city of Kathmandu.

The event, held near the border with India, involves the world’s largest sacrificial slaughter of animals including water buffaloes, goats, rats, pigs and birds.

Hundreds of thousands of participants are expected to attend, with most worshippers hailing from the Indian states of Uttar Pradesh and Bihar.

By attending the festival in Nepal, people evade the ban on animal sacrifice in their own states.

Devotees believe slaughtering animals in the name of the Hindu goddess, Gadhimai, will end evil and grant their wishes.

In 2009, an estimated five million people visited the Gadhimai festival where more than 200,000 animals were killed.

The event is held every five years, though critics decry it as barbaric.

Numerous animal rights groups have made several attempts to stop the centuries-old ritual, including urging the Nepalese government to stop the killings.

The men involved in the slaughter of the animals are oftentimes largely unskilled, which leads to concerns that the animals are suffering needlessly, and dying slow and painful deaths.

After the festival, the meat, bones and hides of the animals are put up for sale to companies in India.