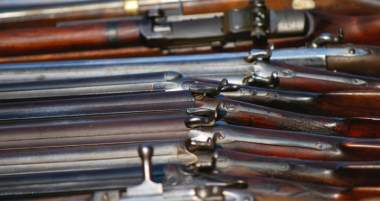 On its official website, the United Nations Office for Disarmament Affairs (yes, that’s really a thing and yes, it is housed right here in the United States) announced that the UN’s Arms Trade Treaty (ATT) “will enter into force on 24 December 2014.”

It is ironical that on the day before the world’s 2.18 billion Christians commemorate the coming of Jesus Christ to the Earth, the United Nations will officially put into motion a plan to deny them of a right given to them by the very God whose birth they celebrate.

For those unfamiliar with the text of the UN’s Arms Trade Treaty, here’s a brief sketch of the most noxious provisions:

Arguably, the Arms Trade Treaty would become the law of the United States if the Senate were to ratify the treaty.

While that is the process that the Constitution establishes for the implementation of treaties, fundamental principles of construction and constitutional law dictate that no treaty that violates the Constitution can become the supreme law of the land. In the case of the UN’s Arms Trade Treaty, there is no doubt that regardless of presidential signatures or congressional consent, this treaty cannot pass constitutional muster and therefore will never be the valid law of the land.

Unless, of course, Americans once again acquiesce to President Obama’s assumption of illegal authority and relinquish their rights and weapons regardless of the reasons they should not do so.

There is a higher authority, however, who never asked his followers to surrender their weapons and leave themselves defenseless in the war against tyranny.

While the president declares that greater federal restriction on the right to own, transfer, buy, and sell guns and ammunition is necessary in order to “heal our troubled minds,” Christians believe that there is only one place to turn for such relief: the Great Physician.

Christians, moreover, believe they not only have the right to keep and bear arms, but have the obligation to do so in the fight to protect freedom. The idea that God has commanded his children to own weapons and to be ready to wield them in defense of liberty might sound odd to many, but the scriptures provide ample evidence of this divine injunction.

In Luke 22:35-36, to cite one example, Jesus commanded his followers to purchase a sword in defiance of Roman law. Within the boundaries of the world under the control of the Roman emperor, to carry such a weapon was a crime punishable by death.

Why, then, would Jesus, the Prince of Peace, command his followers to break the law of the world’s most powerful empire — with legions of armed enforcers around every corner — if the benefit of keeping that commandment did not outweigh the potential harm?

Furthermore, if Jesus was the pacifist so many modern gun-rights deniers portray him as, why is there not a single syllable in the scriptures forbidding disciples from keeping and bearing arms?

If God is the same yesterday, today, and forever, why would he instruct early Christians to arms themselves, but insist that modern disciples be left defenseless? And, what of Paul’s pronouncement that “if anyone does not provide for his own, and especially for those of his household, he has denied the faith and is worse than an unbeliever” (1 Tim. 5:8)?

If God preferred that his children refrain from buying, selling, owning, or transferring weapons, why is there not one verse in the entire canon of Christian scripture setting out such counsel?

Where has the Christian adherence to and understanding of this principle gone?

Perhaps it has slipped into oblivion, much like the related precept of being steadfastly dedicated to obeying the world of God in defiance of immoral government edicts.

Perhaps there are “evil men and seducers” who are “without natural affection, trucebreakers, false accusers, incontinent, fierce, despisers of those that are good.” (2 Timothy 3: 3, 13) who intend to enslave mankind and who understand that a disarmed populace is a slave populace.

Turning to the wisdom and warnings of the Holy Bible, Christians can find the “instruction in righteousness” that they believe lead them to “all good works.” (2 Timothy 3: 16-17)

All Americans, regardless of religion, must recognize that God gave us the freedoms we enjoy and with that gift comes the obligation of protecting ourselves and our loved ones. We must be armed, not for the purpose of private vengeance, but to remain ready to defend the liberty that is our inheritance.

The next meeting of the states that are parties to the Arms Trade Treaty — including the United States — is scheduled for November 27-28 in Berlin, Germany. There is time, then, to convince our elected leaders to refuse to sacrifice our freedom to keep and bear arms on the altar of one-world government.

Joe A. Wolverton, II, J.D. is a correspondent for The New American.