Myanmar and Its Manufacturing Genocidal Racism towards Rohingya

There was inter-ethnic solidarity for the Rohingya/Muslims of Arakan dating back to 17 May 1978, the year of the first state-sponsored campaign of terror and destruction against the Rohingyas.

“We, the Representatives of the peoples of Kachin, Karen, Palaung, Lahu, Shan and Wa, in deep sorrow, hereby express our heart-felt sympathy to the defenceless Muslims who fled to escape the compound racial and religious persecution by the Rangoon Government armed forces.”

Read on the solidarity statement from 1978 in the attached full text (in 2 JPEG files in the end).

Note the Ngagamin Operation (or King Dragon Operation) launched under the then Home Minister Brigadier Sein Lwin, known as the Butcher of Rangoon in 8.8.88 reached Sittwe in Feb 1978 – in fact on 11 Feb 1978, ironically one day before the Union Day, to celebrate Burma’s ethnic diversity in unity!)

By the end of June 1978, over 200,000 – some say a quarter million – Rohingyas and other Muslims fled the country across the border into Bangladesh.

The Bangladeshi Government then led by General Zia Raman opened the border and let the Muslim refugees in to his country to escape the immediate violence, death and rape by the Burmese and Rakhine combined forces (local law enforcement in Rakhine state were made up primarily of Rakhine while senior commanders and administrators were Bama from Rangoon, starting with Home Minister Brigadier Sein Win in Rangoon and Western Command commander based in Sittwe).

Subsequently, Ne Win’s Foreign Minister Tin Ohn was invited to Bangladesh capital where Bangladeshi senior officials veiled a threat of arming Rohingya refugees – number over 200,000 – if Burma did not take back their own nationals – Muslims from Arakan.

Bangladeshi general and PM Zia also traveled to Indonesia, Malaysia and other Muslim countries to rally support for the persecuted muslims in Arakan.

Finally, Ne Win backed down and agreed to take the Musim refugees back from Bangladesh.

By July and August UNHCR got involved in repatriating Rohingyas back to Arakan.

In the next 2-3 years, Ne Win and his anti-Muslim/anti-Rohingya deputies including Rakhine academics such as San Thar Aung (physics professor and director general of higher education) and Aye Kyaw (Australian-trained historian of nationalist movements in Burma) connived a legal strategy – and the result was the drafting of the 1982 Citizenship Act.

By Oct 1982, the draft was completed and Ne Win’s legal adviser and clerk Dr Maung Maung (British and Dutch-trained lawyer and legal scholar who had a stint at Yale Law School) oversaw the whole legal campaign to strip the Rohingyas of nationality by a stroke of a legal pen. (Hitler and his legal advisers also enacted laws stripping the Jews of Germany of nationality and paving the way for the eventual physical destruction of the Jews as a national/ethnic/religious community in Germany and throughout Nazi-occupied Europe).

Like the Germans under Nazi rule who were told that the Jews were a threat to German nation, the Burmese public has been told a similar genocidal lie about the Rohingyas. (Myanmar Peace Center’s Dr Min Zaw Oo is also playing the role of a Nazi-ish adviser, writing a series of delusional essays in Burmese framing the Rohingya issue in the larger equally delusional discourse of ‘the War on Terror’ – published in THE VOICE – portraying the helpless, half-starved Rohingya as an Islamic threat to “Buddhist” Burma!)

In 1978, the estimated population of the Rohingyas was 1.3 million.

Meanwhile the country’s overall population is estimated to have grown from 26 millions in 1978 to about 50 million in 2014.

Meanwhile the Burmese regime is telling the public that there is a Rohingya population explosion posing a serious demographic threat to the country, parading around in the Burmese official media some Rohingya family – perhaps rare exceptions – with 4 wives and 30 children (not exact number).

(Khin Yin, Kyaw Yin Hlaing and Ban Ki-Moon’s Special Envoy Vijay Nambia were lobbying the UN and governments around the world to drop the Rohingya’s self-identity – Rohingya – and telling every official they meet ‘Rohingya is a toxic name that will inflame popular opinion among ultra-nationalist “Buddhist” Rakhines, thereby making it difficult to resolve the ‘sectarian conflict’ – a verifiable distortion of the fact that it is the military – and successive military regimes since Ne Win – that initiated the campaign to destroy the Rohingya, both symbolically via the erasure of the name, the identity and history – and literally as a cohesive ethnic, religious and national group).

This Zero Growth in population is the DIRECT result of a genocidal policy of Burma maintained since 1978.

Ex-General Khin Nyunt also confirmed that there was NO IN-FLOW Muslims from “Bengali’, only the fleeing of Arakan’s Muslims across the borders into Bangladesh. He did so in his ‘top secret’ lecture, to a cadre of officiating Burmese brigadier generals at the then National Defense College, (Khin Nyunt was the founder of the notorious Na-Sa-Ka, Burmese equivalent of SS as far as the Rohingyas in Arakan).

It is incredibly pathetic that the entire regime of Nwa Thein Sein – in fact all successive regimes of Bama generals – have been feeding the Burmese public this racist poison for the past nearly 40 years.

All genocidal atrocities are typically preceded by constructing a target community or people as ‘viruses’ ‘threats’ ‘pests’ ‘illegals’ etc. As Amartya Sen – who lived through violent racial and religion-justified killings in South Asia – Lahore – observed perceptively any otherwise good and peaceful people can be turned to a genocidal lot by carefully crafted state-manufactured propaganda.

Every year the Burmese military regimes since Ne Win’s era brought hundreds of Burmese senior and junior teachers to Civil Servant Training School at Hpaung Gyi where high ranking military officers, including Khin Nyunt, would come and spread lies, fear and hatred of the Rohingyas among the country’s educators – teachers and other civil service members.

Tragically for those of us the ‘good and informed Burmese’, our country is populated by the good Buddhist public who have been thoroughly duped and brainwashed into behaving like the German Nazis in the Third Reich.

The result of nearly 40 years of Burmese military’s genocidal propaganda is that our country in 2014 is overwhelmingly genocidal and racist towards the Rohingyas. Hatred is never defeated by historical facts. Germans in the Allied- occupied Germany post-Hitler denied any knowledge of atrocities committed against 6 million Jews and another 4-5 millions Poles, ‘gypsies’, Russians, German communists, the disabled German, Jehovah Witnesses, etc. The American troops forced these defeated ordinary Germans to go and see – and remove by their hands – piles of hundreds of corpses in numerous concentration camps. Even then some Germans, both men and women, were seen laughing and giggling – before they entered these camps as if they were heading to a community picnic! Only when they saw first hand rotten corpses, gas chambers, charred bodies, etc. were they forced to accept that their nation was GENOCIDAL.

No two genocides or cases of mass atrocities are exactly alike.

But denial on the part of the perpetrators and perpetrating nations is an integral to all genocides. I was 15 feet behind (through the glass wall in the International Tribunal Chamber) Brother Number Two of Khmer Rouge – a Thammasat University (Bangkok)-trained law student and education minister – claiming his innocence and ‘I was not aware of the atrocities’ – during his closing statement.

The Burmese public is of course going to deny that they are genocidally racist. Many a good people who know better keep to themselves against the overwhelmingly genocidal Burmese public sentiment towards the Rohingya.

Back in 1978, other minorities such as Wa, Lahu, Kachin, Karen, Shan, Palaung, etc. dared express their solidarity and empathy for the persecuted Muslim minorities of Arakan.

Now in 2014, even the Kachin Independence Organization’s spokesperson ex-Colonel James L. based in BKK denied any knowledge of Rohingya and denied showing any sympathy for the Rohingya.

That IS the direct effect of Nazi-like anti-Rohingya propaganda by the Psychological Warfare Department of Ministry of Defense in Burma.

The thought of Burma’s good “Buddhists” turning Nazis really gives me chills down my spine. I hope it does for you too. 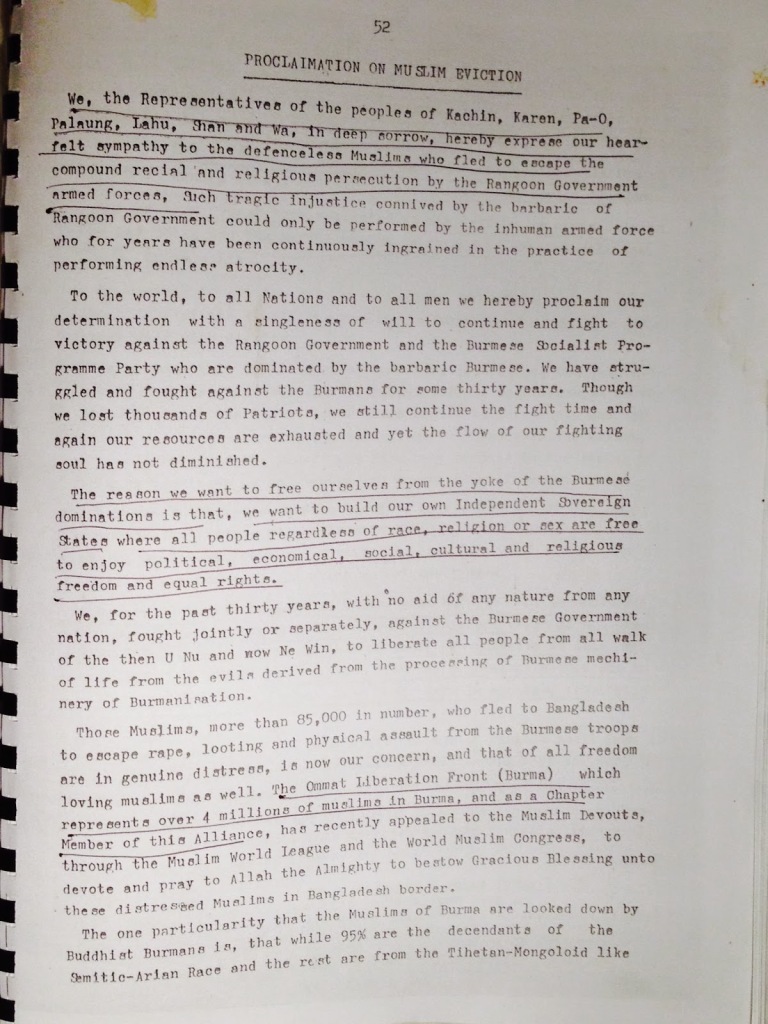 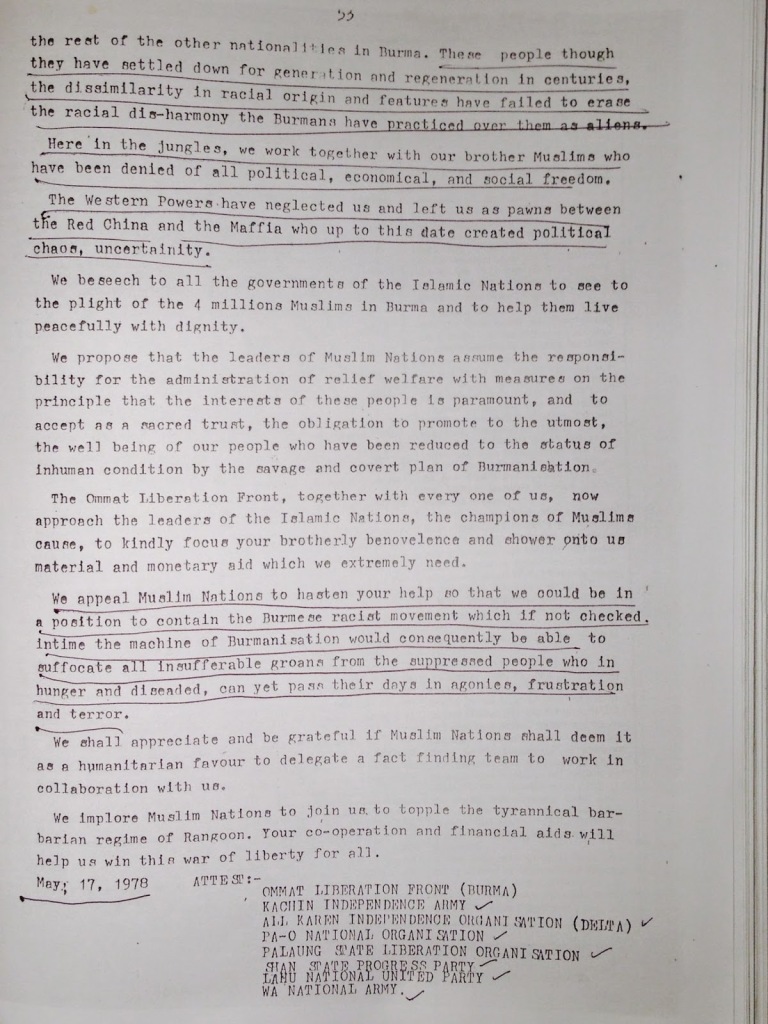 Dr. Maung Zarni, Associate Fellow, the University of Malaya, is a member of the TRANSCEND Network for Peace, Development and Environment, founder and director of the Free Burma Coalition (1995-2004), and a visiting fellow (2011-13) at the Civil Society and Human Security Research Unit, Department of International Development, London School of Economics. His forthcoming book on Burma will be published by Yale University Press. He was educated in the US where he lived and worked for 17 years. Visit his website http://www.maungzarni.net.