Activists say the ban will embolden the anti-fracking movement in several states. 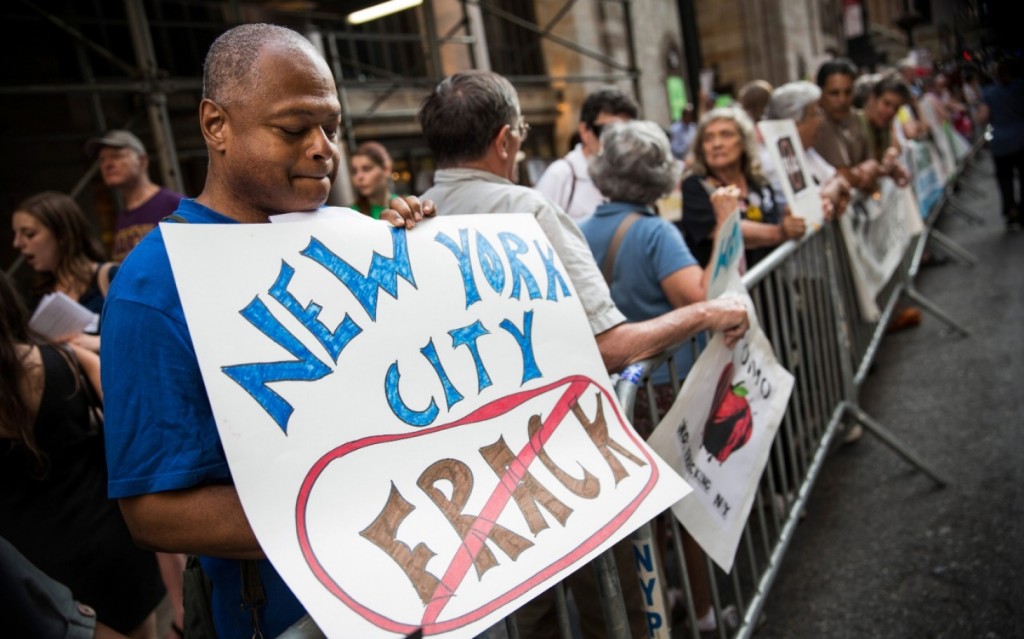 The news took even the most seasoned environmental activists by surprise: After years of review, Gov. Andrew Cuomo announced Wednesday that New York state would ban hydraulic fracturing.

“I can barely contain myself,” said Nadia Steinzor, the eastern coordinator for national nonprofit Earthworks. “Even though Cuomo recently said he was going to make a clear decision, we were not expecting something as exciting and straightforward as this.”

New York state’s decision comes two years after the state Department of Health initiated a review of the possible health effects of hydraulic fracturing, a process in which thousands of gallons of water is mixed with chemicals and sand and pumped deep into the earth to break up gas-rich shale rock formations. The process has been approved in dozens of states across the U.S. and has often been touted by supporters as an economic boon to struggling regions, including next door in Pennsylvania.

New York’s decision is particularly significant because the Marcellus and Utica shale regions, two of the most productive gas plays in the world, lie underneath the state. While there is some debate over the economic benefits of fracking, there’s little doubt that if New York were to legalize the practice it could have reaped billions in revenue and created hundreds or thousands of jobs. By banning the practice, Cuomo has become one of the first state leaders to endorse the idea that the potential health and environmental effects of fracking outweigh the potential economic benefits. Vermont is the only other state with a ban on fracking, although Vermont doesn’t sit atop shale.

Activists hope that Cuomo’s decision will spark more bans across the country. “The fact that they took such a clear conclusion on these health risks sends a very strong signal that will reverberate nationwide about the risks to water, land and health,” Steinzor said.

“I asked myself, ‘Would I let my family live in a community with fracking?’ The answer is no,” Zucker said in a statement. “I therefore cannot recommend anyone else’s family to live in such a community either.”

The state’s report stopped short of definitively saying that fracking can affect air quality, water quality, and the health of those that live near it. But it said the majority of scientific literature showed there were enough questions about those potential effects to warrant a ban.

The hydraulic fracturing industry called the ban a political move.

“The governor clearly understands where important constituencies lie on this issue and he’s acknowledged that,” said Frank Macchiarola, executive vice president of government affairs at America’s Natural Gas Alliance, a trade group. “He is a first rate student of politics and he has been his whole life, and every decision he makes is filtered through that political lens.”

New York has had a moratorium on fracking since 2008. The ban won’t be made official until early 2015, but that hasn’t stopped activists from speculating about how it will affect fracking across the country.

Several activist groups — from Pennsylvania to Colorado to California — said the decision would breathe new life into their anti-fracking campaigns. Pennsylvania activist Stephen Cleghorn said he would submit a request to Gov.-elect Tom Wolf to issue a point-by-point response to New York’s health study.

Of course, New York’s decision is not a panacea for those against fracking. The practice has made billions of dollars in Pennsylvania, Ohio, Texas and elsewhere, with other states lining up to take advantage of their resources. Even Maryland, which sits atop very little natural gas, is now poised to legalize the process.

Even with a ban, New York has been inundated with fracking infrastructure — pipelines, gas compressor stations, waste disposal sites and storage facilities. The same day New York announced its ban, dozens of activists were arrested in Seneca, New York, for blocking the entrance to a recently-approved methane storage facility. That project was approved by the Federal Energy Regulatory Commission, which means only federal intervention could stop it.

Activists say the Seneca project shows that while Cuomo’s decision was important, it was only the first step toward getting more political leaders to pay attention to their movement.

“There are still gas infrastructure projects that are alarming, and many of those are controlled by the federal government,” said John Armstrong, a New York–based anti-fracking activist. “That shows the failure of Obama’s environmental policy. Maybe he should take a lesson from Cuomo.”