Barack Obama and Raúl Castro have thanked Pope Francis for helping broker a historic deal to begin normalising relations between the United States and Cuba, after 18 months of secret talks over prisoner releases brought a sudden end to decades of cold war hostility.

The two presidents spoke simultaneously on Wednesday to confirm the surprise reversal of a long-running US policy of isolating Cuba, detailing a series of White House steps that will relax travel, commercial and diplomatic restrictions in exchange for the release of Americans and dissidents held in Havana.

Though a formal end to the US trade embargo requires legislation in Congress, both Obama and Castro said they believed such executive action was sufficient to significantly open up relations between the two countries and allow travellers and trade to flow relatively freely.

“In the most significant changes in our policy in more than fifty years, we will end an outdated approach that, for decades, has failed to advance our interests, and instead we will begin to normalise relations between our two countries,” said Obama in an address from the White House cabinet room. “Through these changes, we intend to create more opportunities for the American and Cuban people, and begin a new chapter among the nations of the Americas.”

President Castro, who took over from his brother Fidel in 2008, was only slightly less expansive, calling on Congress to formally lift the embargo but saying he believed Obama could substantially “modify its use”.

“This decision of President Obama deserves the respect and acknowledgement of our people,” said Castro in an address on Cuban television. “The progress attained in the interchange show it is possible to find solutions to many problems. As we have repeated we should learn the art of coexistence in a civilised manner with our differences.”

The former defence minister welcomed the release of three Cuban intelligence agents held in the US and recalled a promise from Fidel that they would return. It was the only mention of his sibling, who retired in 2008 in poor health and remains largely out of the public eye.

Gerardo Hernández, Antonio Guerrero and Ramón Labañino were among five Cubans jailed for spying on anti-Castro groups in Florida. In exchange for them, Havana released a Cuban man described by Obama as “one of the most important intelligence agents that the United States has ever had in Cuba”. The man, who was freed after nearly 20 years in prison, is said to have been responsible for revealing the “Miami Five” and other prominent Cuban agents. The Cuban government also released 53 political dissidents as part of the deal. 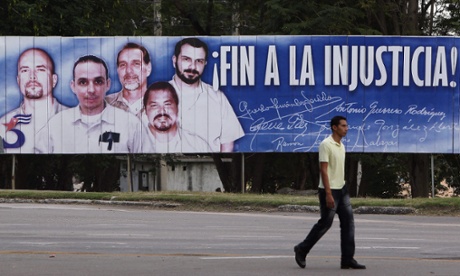 A man walks in front of a banner of the Cuban Five which says ‘End the injustice’. Photograph: Alejandro Ernesto/EPA

But the surprise breakthrough came principally after a phone call, said to last 45 minutes to an hour, between Obama and Castro on Tuesday finalised the release of Alan Gross, a US government aid contractor held for five years in Cuba, which accused him of being a spy.

Gross, who the US insists was released on “humanitarian grounds” unrelated to the exchange of spies, was flown back to Washington on Wednesday accompanied by Senators Patrick Leahy and Jeff Flake and congressman Chris van Hollen.

Speaking in Washington on his return to the US, Gross said he hoped that the US and Cuba can now move beyond their “mutually belligerent policies”.

“Five and a half decades of history show us that such belligerence inhibits better judgement. Two wrongs never make a right. I truly hope we can get beyond these mutually belligerent policies and I was very happy to hear what the president had to say today,” he said.

Gross said he had the utmost respect for the Cuban people and said he was pained “to see them treated so unjustly”.

“In no way are they responsible for the ordeal to which my family and I have been subjected,” Gross said, describing the vast majority of Cubans as “incredibly kind, generous and talented”.

But even as Gross was en route to the US, it became clear that a far larger negotiation had been underway since private talks began in Canada in June 2013.

These were supported closely watched by Pope Francis, who personally wrote to both leaders and hosted a crucial secret summit at the Vatican this autumn, which they credited with helping clinch the deal.

“His Holiness Pope Francis issued a personal appeal to me and to Cuba’s president, Raúl Castro, urging us to resolve Alan’s case and to address Cuba’s interests in the release of three Cuban agents, who’ve been jailed in the United States for over 15 years,” said Obama.

Nevertheless, the deal brought immediate and fierce criticism from Congress, where many senior figures in both sides believe Obama has struck a poor deal, with few concrete commitments toward political reform from Havana.

“The White House has conceded everything and gained little in return,” said Florida senator Marco Rubio. “We are getting no commitment on freedom of the speech, elections, no binding commitment on opening up the internet or even the semblance of a transition to democracy.”

“This entire policy shift is based on a lie and illusion, that more access to money and goods will translate to more political freedom,” added the Republican presidential hopeful.

A full end to the US trade embargo of Cuba would require legislation in Congress, something for which there has been virtually no appetite until now, but the White House hopes that by using a series of executive actions to minimise its enforcement, it can provide a breakthrough that will encourage political reform in Cuba and soften political opposition in the US.

“I’m not expecting transformation of Cuban society overnight,” said Obama. “[But] we can’t keep doing the same thing for five decades and expect a different result.”

“We fully expect we will continue to have strong differences, particularly on democracy and human rights … [but] engagement is a better tool than isolation and nowhere is that more clear than Cuba,” added a senior US administration official in a White House briefing call for reporters. “By opening up we will able to promote freedom.”

Castro, who has introduced economic reforms but retained tight political control, said Cubans had stayed loyal to the revolution and its social justice ideals despite numerous challenges and would continue to do so. “We carry forward, given the difficulties, with the actualisation of our economic model to build a prosperous and sustainable socialism.”