The International Criminal Court (ICC) upgraded the Palestinians’ status to “non-state observer” at its summit meeting in New York on Monday [8 Dec 2014].

While largely symbolic, the move gives the Palestinians the right to ratify the Rome Statue, the founding treaty of the ICC. So far, the Palestinians have not indicated that they will join the 122-member body.

Palestinian Ambassador to the United Nations Riyad Mansour told the Ma’an News Agency that the new status at the ICC is “another victory for Palestinians at the international level, bringing them closer to restoring their rights, and opening the door wide to drag leaders of the Israeli occupation to the dock of this court, so the souls of the victims can finally rest in peace.”

Palestinian Authority President Mahmoud Abbas has long promised to join the tribunal should negotiations with Israel fail, opening up the possibility that Israel could be tried for war crimes in the disputed territories. But by joining the ICC, the Palestinians also open themselves up to war crimes probes, which has led to speculation that joining the ICC is only a bluff on the part of Abbas. 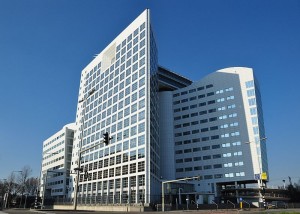 The International Criminal Court in the Netherlands. Photo: wiki commons.