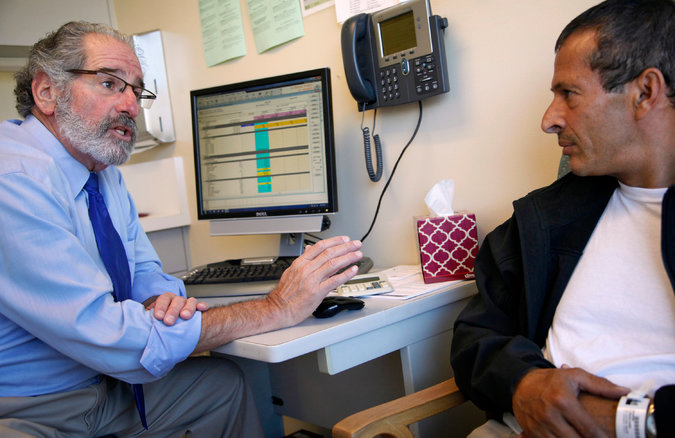 When Dr. Jeffery Ward, a cancer specialist, and his partners sold their private practice to the Swedish Medical Center in Seattle, the hospital built them a new office suite 50 yards from the old place. The practice was bigger, but Dr. Ward saw the same patients and provided chemotherapy just like before. On the surface, nothing had changed but the setting.

But there was one big difference. Treatments suddenly cost more, with higher co-payments for patients and higher bills for insurers. Because of quirks in the payment system, patients and their insurers pay hospitals and their doctors about twice what they pay independent oncologists for administering cancer treatments.

There also was a hidden difference — the money made from the drugs themselves. Cancer patients and their insurers buy chemotherapy drugs from their medical providers. Swedish Medical Center, like many other others, participates in a federal program that lets it purchase these drugs for about half what private practice doctors pay, greatly increasing profits.

Oncologists like Dr. Ward say the reason they are being forced to sell or close their practices is because insurers have severely reduced payments to them and because the drugs they buy and sell to patients are now so expensive. Payments had gotten so low, Dr. Ward said, that they only way he and his partners could have stayed independent was to work for free. When he sold his practice, Dr. Ward said, “The hospital was a refuge, not the culprit.”

When a doctor is affiliated with a hospital, though, patients end up paying, out of pocket, an average $134 more per dose for the most commonly used cancer drugs, according to a report by IMS Health, a health care information company. And, the report notes, many cancer patients receive multiple drugs.

“Say there was a Costco that had very good things at reasonable prices,” said Dr. Barry Brooks, a Dallas oncologist in private practice. “Then a Neiman Marcus comes in and changes the sign on the door and starts billing twice as much for the same things.” That, he said, is what is happening in oncology.

The situation is part of the unusual world of cancer medicine, where payment systems are unique and drive not just the price of care but what drugs patients may get and where they are treated. It raises questions about whether independent doctors, squeezed by finances, might be swayed to use drugs that give them greater profits or treat poorer patients differently than those who are better insured.

But one thing is clear: The private practice oncologist is becoming a vanishing breed, driven away by the changing economics of cancer medicine.

Practices are making the move across the nation. Reporting on the nation’s 1,447 independent oncology practices, the Community Oncology Alliance, an advocacy group for independent practices, said that since 2008, 544 were purchased by or entered contractual relationships with hospitals, another 313 closed and 395 reported they were in tough financial straits. In western Washington, just one independent oncology group is left.

Christian Downs, executive director of the Association of Community Cancer Centers, said that although there are no good data yet, he expected the Affordable Care Act was accelerating the trend. Many people bought inadequate insurance for the expensive cancer care they require. Community doctors have to buy the drugs ahead of time, placing a burden on them when patients cannot pay. The act also requires documentation of efficiencies in medical care which can be expensive for doctors in private practice to provide. And it encourages the consolidation of medical practices.

The American Hospital Association cites advantages for patients being treated by hospital doctors. “The hassle factor is reduced,” said Erik Rasmussen, the association’s vice president of legislative affairs. Patients can have scans, like CT and M.R.I., use a pharmacy and get lab tests all in one place instead of going from facility to facility, he said.

And, he added, there is a reason hospitals get higher fees for their services — it compensates them for staying open 24 hours and caring for uninsured and underinsured patients.

For doctors in private practice, providing chemotherapy to uninsured and Medicaid patients is a money loser. As a result, many, including Dr. Ward before he sold his practice, end up sending those patients to nearby hospitals for chemotherapy while keeping them as patients for office visits.

“We hate doing it, I can’t tell you how much we hate doing it,” said Dr. Brooks, the Texas oncologist. “But I tell them, ‘It will cost me $200 to give you this medication in my office, so I am going to ask you to go to the hospital as an outpatient for infusions.’ ”

Dr. Peter Eisenberg, in private practice in Marin County in Northern California, said: “The disgrace is that we have to treat people differently depending on how much money they’ve got. That we do diminishes me.”

Hospitals may be less personal and less efficient, said Dr. Richard Schilsky, chief medical officer at the American Society of Clinical Oncology. Many private practice oncology offices, he said, “Run on time, they are efficient, you get in, you get out, as opposed to academic medical centers where they may be an hour and a half behind.”

Dr. Ward and others in private practice said they tried for years to make a go of it but were finally defeated by what he described as “a series of cuts in oncology reimbursement under the guise of reform to which private practice is most vulnerable.”

Lower reimbursements have two effects. One is on overhead. Unlike other doctors, oncologists stock their own drugs, maintaining a sort of mini-pharmacy. If a patient gets too sick to receive a drug or dies, the doctor takes the loss. That used to be acceptable because insurers paid doctors at least twice the wholesale price of drugs. Now doctors are reimbursed for the average cost of the drug plus 4.3 percent, there are more and more drugs to stock, and drugs cost more.

“The overhead is enormous,” Dr. Schilsky said. “This is one of the reasons why many oncologists are becoming hospital-based.”

The second — and bigger — effect is less profit from selling drugs to patients. For years, chemotherapy drugs provided a comfortable income. Those days are gone, doctors say.

The finances are very different in hospitals, with their higher reimbursement rates for administering drugs, discounts for buying large quantities, and a special federal program that about 30 percent of hospitals qualify for. The program, to compensate research hospitals and hospitals serving poor people, lets hospitals buy chemotherapy drugs for all outpatients at about a 50 percent discount.

In addition, Dr. Schilsky notes, cancer patients at hospitals use other services, like radiation therapy, imaging and surgery.

“A cancer patient is going to generate a lot of revenue for a hospital,” Dr. Schilsky said.

Health care economists say they have little data on how the costs and profits from selling chemotherapy drugs are affecting patient care. Doctors are constantly reminded, though, of how much they can make if they buy more of a company’s drug.

“When you walk into a doctor’s office you don’t know that in most cancer scenarios there are a range of therapeutic choices,” Dr. Bach said. “Unless the doctor presents options, you assume there aren’t any.”

“Sometimes hidden in such choices — and many times not so hidden — are considerations of what also might be financially more profitable,” he said.

A version of this article appears in print on November 24, 2014, on page A13 of the New York edition with the headline: Private Oncologists Being Forced Out, Leaving Patients to Face Higher Bills.