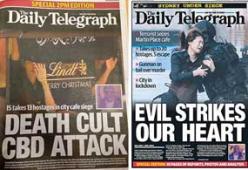 One man’s terrorist is another man’s media mogul. The real source of fear and loathing in Australia.

I saw a headline this morning that has had me spend the day with a laptop open trying to write — trying to understand — what it is that we must take from the nightmare that Australians shared this week.

I’ll get to that headline in a while. I’m on the bus now, heading towards Martin Place, the bobble heads to my left and right who I usually watch flick angry birds and scroll through news feeds are today holding flowers, riding with me, chatting.

When Rupert Murdoch tweets that one man’s madness ought be a ‘wake up call’ for Sydney, the real wake up call is the grand irony with which a web of fear is spun for profit, by generating a different type of violence: a social violence, a violence imposed upon our very zeitgeist by those who control the means by which we get our information.

The real wake up call compels the thinking Australian to question the way in which political agendas will shape the Australian zeitgeist post Sydney Siege.

Many of us understand that he-who-should-not-be-named carried out a terrorist plot in accordance with a personally bastardised version of religious extremism, and are subsequently able to disregard it as demonstrative not of a coordinated international terrorist agenda, but rather one man’s madness.

The violent rhetoric of the mass media challenges this measure. Murdoch wants to turn this into a conversation about Islam.

The bus stops, I walk down George Street towards the stoic thousands. I eavesdrop. How frightening it is to reflect on one’s own opinions and agendas in light of the religious, or ideological disposition, of those providing us with information.

Like most religious organisations, The Church of Murdoch generates extremism under the guise of social concern. The fractured Islamic community must now endure a violent swathe of opinions washing white as the tissues, flowers, and cheeks of the Australian populous gathered to mourn here.

Tomorrow, different agendas will have fed an argument you’ll overhear at the pub about whether or not the only thing that can stop a bad man with a gun is a good man with a gun.

Although one might believe it adheres to a broader agenda, madness is an agenda of its own. It bears repeating that most people are ‘mad’ to some degree, because ‘madness’ is just the flipside of ‘sanity’ cultivated by the mistaken inference that the human psyche naturally abides to some illusory vision of a ‘normality’ spectrum.

We’re all mad here; Carroll’s Cheshire Cat saw ‘sanity’ for the paradoxical delusion that it is, and turned its flipside into a dream. The man who brought Sydney to its knees this week managed to turn this same distinction into a nightmare, a trend that often appears when we let religion design the parameters by which the mentally ill attempt to understand and control human behaviour.

Madness on an individual level can be explosive, but its effects are limited. Two Australians are dead, families destroyed, and the city of Sydney changed irreparably.

Madness on a collective level is harder to gauge, harder to expose, and harder to argue with. It is, however, easier to regulate than the inevitable madness of isolated individuals.

When 15 of 20 people in a room argue that black is white because they all got their information from the same place, it is difficult to prove one man’s madness more socially damaging than a corporately regulated terror campaign on perspective.

See, it is not the lone gunman’s nightmare that will shape Australia. Political agendas created this monster, and will manipulate our responses to his nightmare in accordance with their own confused mish-mash of profit-driven, deluded benevolence.

Australians, like many, separate along political lines, religious lines, and then re-group come election season. Regrouped, we share in broad ideological agendas; mistaking the convictions of the group we fold toward as our own convictions, based on our own individual moral agency.

For obviously, there is no united ‘Islamic agenda’, as there is no united Jewish or Christian agenda, no united socialist or libertarian agenda. When a socialist kills someone, it was their madness, not the means by which they articulate their value system, which did the killing. The problem is that it doesn’t matter who torched the Reichstag, what matters is what Third Reich textbooks said about the communists in response.

The agenda of the lone gunman is irrelevant when compared to the agenda of those controlling the direction of The Nightmare’s shockwaves. The mass media has a far broader-reaching agenda with considerably more significant socio-political repercussions.

The man who held our brothers and sisters hostage was a weak, sick individual whose name we owe it to ourselves to not think, not write, nor remember. And most importantly, no one shared in his agenda. He didn’t even know which flag would best represent his stuttering homunculus. He is another dead terrorist, he will rot in the ground, or burn and float up into the sky to perhaps one day travel impossibly minute, wonderfully inconsequential, as a reincarnated speck of carbon dragged in a comet’s tail across the night sky before our great-great-great-great-grandchildren.

The truth is that the Australian landscape has been and will continue to be shaped more by the mass media’s handling of The Nightmare, than the attack itself.

Terrorism isn’t about killing as many people as possible at once, or winning wars. Terrorism is about leaving a challenging, lasting effect. To borrow from Tim Winton, the lone gunman is no more than wallpaper — a meaningless benign backdrop reacting with the light refracted through the lenses of the real change-makers. This is a chickens and eggs argument, where we must ask ourselves what came first – repressive regimes stimulating extremist fringe movements toward violence, or extremist fringe movements stimulating our regime toward domestic and international repression.

We need to read all headlines, all status updates, and all reactionary ‘what-ifs’ and ‘how-comes’, very cautiously. Our Australian talking heads belong to collective agendas, collective agendas that do fundamentally control the way in which we grow, or regress into fear, after this event.

We cannot let mass media headlines compel subservience to increased surveillance; we cannot let one night of the police doing their job well be the measurement by which they earn a broad increase in trust and respect; we cannot let a lone gunman perpetuate misnomers that surround Islam, group a language with a religion, and/or enable an expectation that someone’s loosely fitting culturally influenced attire is reason enough to presume that you could easily fit a couple of pipe-bombs in a niqab or burqa.

The Daily Telegraph develops an agenda in accordance with a fiduciary obligation to Murdoch press shareholders: fear sells well, xenophobia is easily riled up when a person with brown skin does exactly what conservative governments have suggested they might do if we don’t send them overseas for processing.

The agenda of a press that owes more responsibility to capital return than material social services is far more malevolent than the agenda of the lone gunman.

If we were to play a game called ‘name the most successful terrorist organisation in human history’, the lone gunman’s got nothing on the competition between the Catholic Church and the Murdoch Empire.

Their front-page headline today, ‘FREE PASS TO TERROR’, has the corners of my lips twitching upward like an angry mutt’s. How dare the conservatives capitalise on this tragedy so unashamedly, I find myself scowling without thinking. How dare they use the Sydney siege as a vehicle to extend the ideologically confused celebration of increased police powers, increased surveillance, a deliberate erosion of civil liberties….

The by-line reads, ‘Exclusive: How soft laws and lax intel let loose a monster’. How dare these people! If I wanted to hold up the coffee shop I’m sitting in right now with the butter knife on the table behind me, I reckon I could give it a red hot go, and no matter how many bureaucrats a government employs to scan my Facebook chat conversations looking for signs of pre-meditated butter knife related violent ambition, there is no arm of government that can control a voice in my head telling me to kill them all on behalf of the caliphate at the end of my confused delusional pipedream.

The little voice in the head of the man whose name I refuse to remember might have been a Jew, or a Christian, or a Muslim, or a purple dishcloth called Nathan.

As I sit in this coffee shop I realise that the Telegraph perched beside me is just terrorist propaganda. An older gentleman walks past and asks if it is mine. I tell him it’s all his.

The progressives will yell that the Howards, the Abbotts, the Joneses, and the Lambies, invoke burqua-related fear, and boat-people anguish, in a way that culminates in violent expressions of social frustration: The Cronulla Riots, The Sydney Siege, the ever increasing stream of YouTube videos of whites yelling at others on public transport… The conservatives will rock back on their chairs, exhaling a three word slogan about boats needing to be stopped, and give you that I told you so look as they scan the front page.

The truth is that we are all scared. It is what we do with that fear — have it boil as passionate plans for progress, or have the lukewarm bathwater of the media status quo stagnate around us for fear of the brief chill one might endure between the tub and the towel, which directs the agendas that we reward with support.

The agendas of bigger fish divide us into opposing blocs with contrived moral absolutism, as Arthur Miller so aptly reflects upon in this in his Macarthyist adaptation of the Salem witch hunts, The Crucible.

In The Crucible, it is left ambiguous as to whether or not any witchcraft actually took place in order to expose the grave consequences of dogma. In Sydney, we watched 17 hours of constant coverage of The Nightmare, making it near impossible to not find oneself lighting our torches of despair, sharpening our pitchforks of anger.

Australia, we must tread carefully. The real terrorists are black and white and read all over.