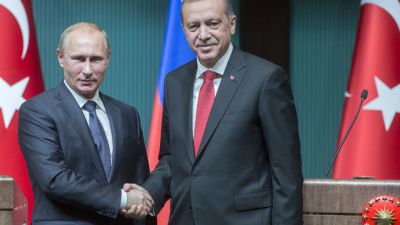 So the EU “defeated” Putin by forcing him to cancel the South Stream pipeline. Thus ruled Western corporate media.

Facts on the ground spell otherwise. This “Pipelineistan” gambit will continue to send massive geopolitical shockwaves all across Eurasia for quite some time.

In a nutshell, a few years ago Russia devised Nord Stream – fully operational – and South Stream – still a project – to bypass unreliable Ukraine as a gas transit nation.

Now Russia devised a new deal with Turkey to bypass the “non-constructive” (Putin’s words) approach of the European Commission (EC).

Background is essential to understand the current game.

Five years ago I was following in detail Pipelineistan’s ultimate opera – the war between rival pipelines South Stream and Nabucco.

Nabucco eventually became road kill. South Stream may eventually resurrect, but only if the EC comes to its senses (don’t bet on it.)

The 3,600 kilometer long South Stream should be in place by 2016, branching out to Austria and the Balkans/Italy. Gazprom owns 50 percent of it – along with Italy’s ENI (20 percent), French EDF (15 percent) and German Wintershall, a subsidiary of BASF (15 percent).

As it stands these European energy majors are not exactly beaming – to say the least. For months Gazprom and the EC were haggling about a solution. But in the end Brussels predictably succumbed to its own.

Russia still gets to build a pipeline under the Black Sea – but now redirected to Turkey and, crucially, pumping the same amount of gas South Stream would. Not to mention Russia gets to build a new LNG (liquefied natural gas) central hub in the Mediterranean. Thus Gazprom has not spent $5 billion in vain (finance, engineering costs).

The redirection makes total business sense. Turkey is Gazprom’s second biggest customer after Germany. And much bigger than Bulgaria, Hungary, and Austria combined.

Russia also advances a unified gas distribution network capable of delivering natural gas from anywhere in Russia to any hub alongside Russia’s borders.

And as if it was needed, Russia gets yet another graphic proof that its real growth market in the future is Asia, especially China – not a fearful, stagnated, austerity-devastated, politically paralyzed EU.

The evolving Russia-China strategic partnership implies Russia as complementary to China, excelling in major infrastructure projects from building dams to laying out pipelines. This is business with a sharp geopolitical reach – not ideology-drenched politics.

Turkey also made a killing. It’s not only the deal with Gazprom; Moscow will build no less than Turkey’s entire nuclear industry, apart from increased soft power interaction (more trade and tourism).

Most of all, Turkey is now increasingly on the verge of becoming a full member of the Shanghai Cooperation Organization (SCO); Moscow is actively lobbying for it.

This means Turkey acceding to a privileged position as a major hub simultaneously in the Eurasian Economic Belt and of course the Chinese New Silk Road(s).

Washington has tried very hard to create a New Berlin Wall from the Baltics to the Black Sea to “isolate” Russia. Now comes yet another Putin judo/chess/go counterpunch – which the opponent never saw coming. And exactly across the Black Sea.

A key Turkish strategic imperative is to configure itself as the indispensable energy crossroads from East to West – transiting everything from Iraqi oil to Caspian Sea gas. Oil from Azerbaijan already transits Turkey via the Bill Clinton/Zbig Brzezinski-propelled BTC (Baku-Tblisi-Ceyhan) pipeline.

Turkey would also be the crossroads if a Trans-Caspian pipeline is ever built (slim chances as it stands), pumping natural gas from Turkmenistan to Azerbaijan, then transported to Turkey and finally Europe.

So what Putin’s judo/chess/go counterpunch accomplished with a single move is to have stupid EU sanctions once again hurt the EU. The German economy is already hurting badly because of lost Russia business.

The EC brilliant “strategy” revolves around the EU’s so-called Third Energy Package, which requires that pipelines and the natural gas flowing inside them must be owned by separate companies.

Now it’s up to Bulgaria and Hungary – which, by the way, have always fought the EC “strategy” – to explain the fiasco to their own populations, and to keep pressing Brussels; after all they are bound to lose a fortune, not to mention get no gas, with South Stream out of the picture.

So here’s the bottom line; Russia sells even more gas – to Turkey; and the EU, pressured by the US, is reduced to dancing like a bunch of headless chickens in dark Brussels corridors wondering what hit them. The Atlanticists are back to default mode – cooking up yet more sanctions while Russia is set to keep buying more and more gold.

This is not the endgame – far from it. In the near future, many variables will intersect.

Ankara’s game may change – but that’s far from a given. President Erdogan – the Sultan of Constantinople – has certainly identified a rival Caliph, Ibrahim of ISIS/ISIL/Daesh fame, trying to steal his mojo.

Thus the Sultan may flirt with mollifying his neo-Ottoman dreams and steer Turkey back to its previously ditched “zero problems with our neighbors” foreign policy doctrine.

The House of Saud is like a camel in the Arctic. The House of Saud’s lethal game in Syria always boiled down to regime change so a Saudi-sponsored oil pipeline from Syria to Turkey might be built – dethroning the proposed, $10 billion Iran-Iraq-Syria “Islamic” pipeline.

Now the Saudis see Russia about to supply all of Turkey’s energy needs – and then some. And “Assad must go” still won’t go.

US neo-cons are also sharpening their spears. As soon as early 2015 there may be a Ukrainian Freedom Act approved by the US Congress. Translation: Ukraine as a “major US non-NATO ally” which means, in practice, a NATO annexation. Next step; more turbo-charged neo-con provocation of Russia.

A possible scenario is vassal/puppies such as Romania or Bulgaria – pressed by Washington – deciding to allow full access for NATO vessels into the Black Sea. Who cares this would violate the current Black Sea agreements that affect both Russia and Turkey?

And then there’s a Rumsfeldian “known unknown”; how the weak Balkans will feel subordinated to the whims of Ankara. As much as Brussels keeps Greece, Bulgaria and Serbia in a strait jacket, in energy terms they will start depending on Turkey’s goodwill.

For the moment, let’s appreciate the magnitude of the geopolitical shockwaves. There will be more, when we least expect them.