Ukraine Crisis: Playing Russian Roulette with All the Bullets in the Cylinder

There are two main schools of thought in Russia these days about the reasons for the crisis in Ukraine.

The first states that the Cold War never really ended, but lay bubbling in the shadow of the supposedly ‘improving’ relations between Russia and the West.

It has now simply come out into the open, with the US and the EU – weakened by the financial crash and the economic crisis that followed – deciding to go for a gigantic ‘asset grab’ in Ukraine, and installing a pro-Western, fiercely anti-Russian regime in Kiev.

This, they hoped would drag Ukraine into their sphere of influence, with the not so distant aim of turning it into a NATO advanced post on the Russian border.

This school of thinking is shared by quite a lot of people in the Kremlin and the political establishment generally, who have always been saying that the West could not be trusted and that it was a huge mistake to open the doors for Western companies to flood into Russia and occupy serious positions in different sectors of industry. 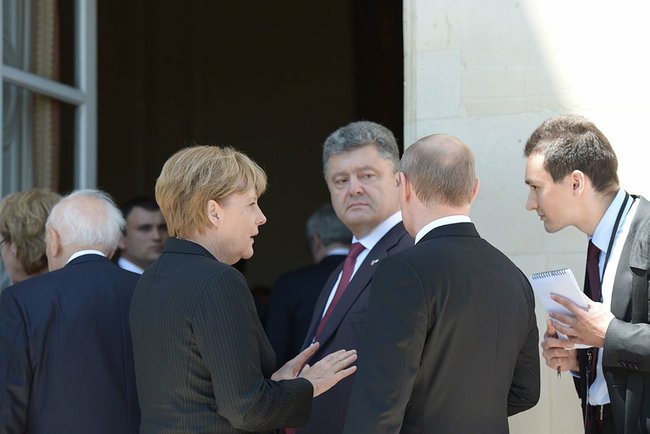 The crisis in Ukraine, therefore, for these people was a logical result of Western expansionism to the east, with the view of staging some sort of ‘colour revolution’ in Russia itself as the final goal.

The other school of thought states that it was actually Moscow’s fault that its European neighbours were looking westwards, simply because Russia could not really offer them anything attractive enough to counter the influence of the West.

Proponents of this school of thinking believe that oil and gas were important factors that maintained the links between Russia and its eastern neighbours; the Russian consumer market had its attractions as well.

But Russia’s rigid political model, the lack of economic liberalism and diversity, the widespread corruption, the strangling of small and medium businesses, and the inability to demonstrate flexibility and readiness to compromise with its neighbours created obstacles that were very difficult to overcome.

Proponents of this liberal concept are in essence saying that Russia – despite all of its achievements in the past 20 years – remains to a large extent Soviet in its mentality and that this is what makes it such a turn off for its western neighbours.

Among Russia’s neighbours Belarus may be a possible exception as it appears to be stuck in the 1970s.

But it is showing some signs of waking up to the new realities.

(Incidentally, this Soviet baggage actually makes Russia very attractive for its eastern neighbours which have a sceptical view on the benefits of the free market and prefer to run their economies in a very Soviet way.)

The most important thing that so many people in the West overlook  when it comes to the crisis in Ukraine  (and Crimea ‘going AWOL’ and becoming part of Russia) is that the Kremlin was not initiating but rather responding to events there.

According to sources I spoke to in Moscow during my recent trip there, the situation in Crimea developed so quickly and unexpectedly for Moscow that it could only follow the scenario rather than dictate it.

“There was absolutely no way President Vladimir Putin could have distanced himself from the drive for independence in Crimea,” one government source told me.

“It would have been like playing the Russian roulette with all the bullets in the cylinder.”

He also told me that the crisis in eastern Ukraine was not exactly what Putin and his people had bargained for.

“It’s a huge headache for the Kremlin,” he said.

“There is no visible face-saving solution at the moment for Moscow and Kiev other than to sit it out and hope that something happens.”

One thing is certain though: both Russia and the West have misjudged the developments that resulted in the overthrow of President Viktor Yanukovich’s regime back in February of this year.

Russia could never have imagined that the West would go as far as sending its troops to Ukraine and other East European countries in a show of strength, openly toying with the idea of arming the Ukrainian army and militias and even looking at a possible scenario of the country joining NATO while imposing crippling economic and financial sanctions on Moscow that smack of the worst periods of the Cold War days.

Meanwhile, the West obviously misjudged the way Moscow would throw its weight behind Crimean independence from Ukraine and respond, if reluctantly, to supporting the anti-government rebels in the east and south of the country.

The feeling among the Russian military is that the Obama Administration was getting the wrong advice about Russia’s willingness to use its military muscle to defend its interests.

The Crimean operation, as word has it, has been accepted in the Pentagon and NATO as a brilliant piece of tactical planning, although, of course, most of the credit should go to the commanders of the naval base at Sevastopol and not the top brass in Moscow.

But what happens next, is the question.

Well, a good move on the part of the West would be to give a firm promise on paper that Ukraine will never become a member of NATO.

This will help to remove a lot of tension in the current stand-off.

Equally downgrading the tension would be the removal of any foreign military presence, including mercenaries, in the eastern part of Ukraine.

A long-term political solution, however, will be harder to achieve.

A good move would be to accept that Crimea will never become part of Ukraine again and negotiate some sort of compensation for Kiev for the loss.

As for Russia, it has been made clear by President Putin and other Russian officials on many occasions that Crimea is a ‘done deal’ and no one is going to discuss the matter further.

On the breakaway regions of Donetsk and Lugansk, Russia will continue to insist on their special autonomy within Ukraine and firm security guarantees from Kiev that they won’t be attacked.

Even if President Putin wanted to be flexible and give up his support of these two self-proclaimed republics, domestic opinion in Russia would not allow him to do it.

It’s one thing rallying his people to withstand the hardships of the Western sanctions and the falling rate of the Russian rouble; but it’s another matter altogether to announce that the ‘brothers and sisters in the east of Ukraine’ will have to sort out the mess all by themselves.

That would be, like my government source has already put it so eloquently, playing Russian roulette with the odds stacked firmly against you.

Alexander Nekrassov is a former Kremlin and government advisor. He is the descendent of famous Russian poet Nikolai Nekrassov and writer Leo Tolstoy.