What Putin Is Not Telling Us 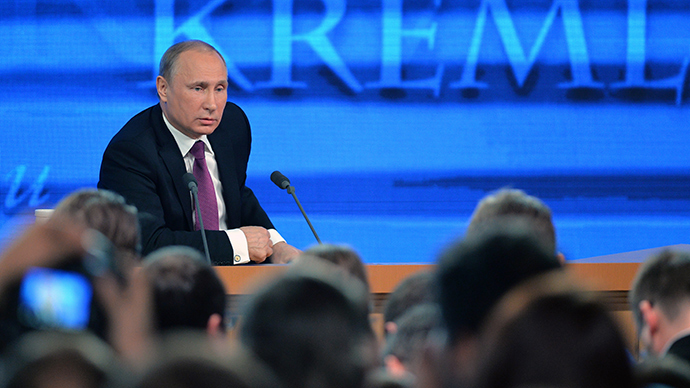 18 Dec 2014 – Even facing what under any circumstances is a perfect storm; President Putin delivered an extremely measured performance at his annual press conference and Q&A marathon.

The perfect storm evolves in two fronts; an overt economic war – as in siege by sanctions – and a concerted, covert, shadow attack to the heart of the Russian economy. Washington’s endgame is clear: impoverish and defang the adversary and force him to meekly bow to the ‘Empire of Chaos’s’ whims. And bragging about it all the way to “victory.”

The problem is Moscow happens to have impeccably deciphered the game – even before Putin, at the Valdai Club in October, pinned down the Obama doctrine as “our Western partners” working as practitioners of the “theory of controlled chaos.”

So Putin neatly understood this week’s monster controlled chaos attack. The Empire has massive money power; a great deal of influence over the world’s GDP at $85 trillion, and the banking power behind that. So nothing easier than using that power through the private banking systems that actually controls central banks to create a run on the ruble. Think about the ‘Empire of Chaos’ dreaming of driving the ruble down by 99% or so – thus wrecking the Russian economy. What better way to impose imperial discipline on Russia?

Russia sells oil in US dollars to the West. Lukoil, for instance, would have a deposit in US dollars in an American bank for the oil they sell. If Lukoil has to pay wages in rubles in Russia, then they will have to sell the US dollar deposits and buy in Russia a ruble deposit for their bank account. This in effect supports the ruble. The question is whether Lukoil, Rosneft and Gazprom are hoarding US dollars overseas – and holding back. The answer is no. And the same applies to other Russian businesses.

Russia is not “losing their savings”, as Western corporate media gloats. Russia can always require foreign companies to relocate to Russia. Apple, for instance, may open a manufacturing plant in Russia. The recent Russia-China deals include the Chinese building factories in Russia. With a depreciated ruble, Russia is able to force manufacturing that might have been located in the EU to be located in Russia; otherwise these companies lose the market. Putin somewhat admitted that Russia should have been demanding this much earlier. The – positive – process is now inevitable.

And then there’s a “nuclear” option – which Putin didn’t even have to mention. If Russia decides to impose capital controls and/or imposes a “holiday” on repayment of larger debt tranches coming due in early 2015, the European financial system will be bombed – Shock and Awe-style; after all, much of the Russian bank and corporate funding was underwritten in Europe.

Exposure to Russia per se is not the issue; what matters is the linkage to European banks. As an American investment banker told me, Lehman Brothers, for instance, brought down Europe just as much as New York City – based on inter-linkages. And yet Lehman was based in New York. It’s the domino effect that counts.

Were Russia to deploy this “nuclear” financial option, the Western financial system would not be able to absorb a shock of default. And that would demonstrate – once and for all – that Wall Street speculators have built a ‘House of Cards’ so fragile and corrupt that the first real storm turns it to dust.

It’s just a shot away

And what if Russia defaults – creating a holy mess out of the country’s $600 billion debt? This scenario reads as the Masters of the Universe telling Janet Yellen and Mario Draghi to create credits in the banking systems to prevent “undue damage” – as in 2008.

But then Russia decides to cut off natural gas and oil from the West (while keeping the flow to the East). Russian intel may wreak non-stop havoc in pumping stations from the Maghreb to the Middle East. Russia may block all the oil and natural gas pumped in the Central Asian ‘stans’. The result: the greatest financial collapse in history. And the end of the ‘Empire of Chaos’s’ exceptionalist panacea.

Of course this is a doomsday scenario. But don’t provoke the bear, because the bear could pull that off in a flash.

Putin was so cool, calm, collected – and eager to delve into details – at his press conference because he knows Moscow is able to move in total autonomy. This is – of course – an asymmetrical war – against a crumbling, dangerous empire. What those intellectual midgets swarming the lame duck Obama administration are thinking? That they can sell American – and world – public opinion the notion Washington (European poodles, actually) will brave nuclear war, in the European theater, in the name of failed state Ukraine?

This is a chess game. The raid on the ruble was supposed to be a checkmate. It’s not. Not when deployed by amateur scrabble players. And don’t forget the Russia-China strategic partnership. The storm may be abating, but the match continues.