Charlie Hebdo: Paris Attack Brothers’ Campaign of Terror Can Be Traced Back to Algeria 1954

Algeria Is the Post-Colonial Wound That Still Bleeds in France

9 Jan 2015 – Algeria. Long before the identity of the murder suspects was revealed by the French police – even before I heard the names of Cherif and Said Kouachi – I muttered the word “Algeria” to myself. As soon as I heard the names and saw the faces, I said the word “Algeria” again. And then the French police said the two men were of “Algerian origin”.

For Algeria remains the most painful wound within the body politic of the Republic – save, perhaps, for its continuing self-examination of Nazi occupation – and provides a fearful context for every act of Arab violence against France. The six-year Algerian war for independence, in which perhaps a million and a half Arab Muslims and many thousands of French men and women died, remains an unending and unresolved agony for both peoples. Just over half a century ago, it almost started a French civil war.

Maybe all newspaper and television reports should carry a “history corner”, a little reminder that nothing – absolutely zilch – happens without a past. Massacres, bloodletting, fury, sorrow, police hunts (“widening” or “narrowing” as sub-editors wish) take the headlines. Always it’s the “who” and the “how” – but rarely the “why”. Take the crime against humanity in Paris this week – the words “atrocity” and “barbarity” somehow diminish the savagery of this act – and its immediate aftermath.

We know the victims: journalists, cartoonists, cops. And how they were killed. Masked gunmen, Kalashnikov automatic rifles, ruthless, almost professional nonchalance. And the answer to “why” was helpfully supplied by the murderers. They wanted to avenge “the Prophet” for Charlie Hebdo’s irreverent and (for Muslims) highly offensive cartoons. And of course, we must all repeat the rubric: nothing – nothing ever – could justify these cruel acts of mass murder. And no, the killers cannot call on history to justify their crimes.

But there’s an important context that somehow got left out of the story this week, the “history corner” that many Frenchmen as well as Algerians prefer to ignore: the bloody 1954-62 struggle of an entire people for freedom against a brutal imperial regime, a prolonged war which remains the foundational quarrel of Arabs and French to this day.

The desperate and permanent crisis in Algerian-French relations, like the refusal of a divorced couple to accept an agreed narrative of their sorrow, poisons the cohabitation of these two peoples in France. However Cherif and Said Kouachi excused their actions, they were born at a time when Algeria had been invisibly mutilated by 132 years of occupation. Perhaps five million of France’s six and a half million Muslims are Algerian. Most are poor, many regard themselves as second-class citizens in the land of equality.

Like all tragedies, Algeria’s eludes the one-paragraph explanation of news agency dispatches, even the shorter histories written by both sides after the French abandoned Algeria in 1962.

For unlike other important French dependencies or colonies, Algeria was regarded as an integral part of metropolitan France, sending representatives to the French parliament in Paris, even providing Charles de Gaulle and the Allies with a French “capital” from which to invade Nazi-occupied north Africa and Sicily.

Like all tragedies, Algeria’s eludes the one-paragraph explanation of news agency dispatches, even the shorter histories written by both sides after the French abandoned Algeria in 1962.

For unlike other important French dependencies or colonies, Algeria was regarded as an integral part of metropolitan France, sending representatives to the French parliament in Paris, even providing Charles de Gaulle and the Allies with a French “capital” from which to invade Nazi-occupied north Africa and Sicily.

More than 100 years earlier, France had invaded Algeria itself, subjugating its native Muslim population, building small French towns and chateaux across the countryside, even – in an early 19th-century Catholic renaissance which was supposed to “re-Christianise” northern Africa – converting mosques into churches.

The Algerian response to what today appears to be a monstrous historical anachronism varied over the decades between lassitude, collaboration and insurrection. A demonstration for independence in the Muslim-majority and nationalist town of Sétif on VE Day – when the Allies had liberated the captive countries of Europe – resulted in the killing of 103 European civilians. French government revenge was ruthless; up to 700 Muslim civilians – perhaps far more – were killed by infuriated French “colons” and in bombardment of surrounding villages by French aircraft and a naval cruiser. The world paid little attention.

But when a full-scale insurrection broke out in 1954 – at first, of course, ambushes with few French lives lost and then attacks on the French army – the sombre war of Algerian liberation was almost preordained. Beaten in that classic post-war anti-colonial battle at Dien Bien Phu, the French army, after its debacle in 1940, seemed vulnerable to the more romantic Algerian nationalists who noted France’s further humiliation at Suez in 1956. 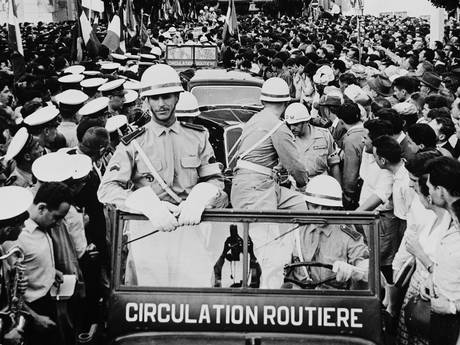 What the historian Alistair Horne rightly described in his magnificent history of the Algerian struggle as “a savage war of peace” took the lives of hundreds of thousands. Bombs, booby traps, massacres by government forces and National Liberation Front guerrillas in the “bled” – the countryside south of the Mediterranean – led to the brutal suppression of Muslim sectors of Algiers, the assassination, torture and execution of guerrilla leaders by French paratroopers, soldiers, Foreign Legion operatives – including German ex-Nazis – and paramilitary police. Even white French sympathisers of the Algerians were “disappeared”. Albert Camus spoke out against torture and French civil servants were sickened by the brutality employed to keep Algeria French.

De Gaulle appeared to support the white population and said as much in Algiers – “Je vous ai compris,” he told them – and then proceeded to negotiate with FLN representatives in France. Algerians had long provided the majority of France’s Muslim population and in October 1961 up to 30,000 of them staged a banned independence rally in Paris – in fact, scarcely a mile from the scene of last week’s slaughter – which was attacked by French police units who murdered, it is now acknowledged, up to 600 of the protesters. 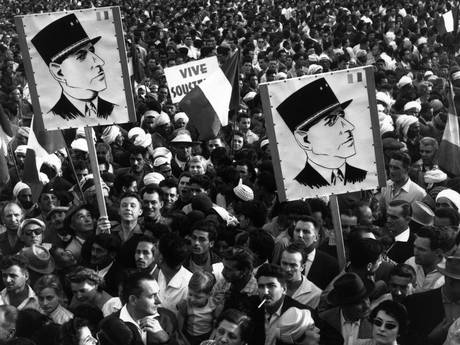 A crowd of Algerian demonstrators outside Government House, carrying Charles de Gaulle posters during the Algerian war of independence in 1985 (Getty Images)

Algerians were beaten to death in police barracks or thrown into the Seine. The police chief who supervised security operations and who apparently directed the 1961 massacre was none other than Maurice Papon – who was, almost 40 years later, convicted for crimes against humanity under Petain’s Vichy regime during the Nazi occupation.

When the end came, despite FLN promises to protect French citizens who chose to stay in Algeria, there were mass killings in Oran. Up to a million and a half white French men, women and children – faced with a choice of “the coffin or the suitcase” – left for France, along with thousands of loyal Algerian “harki” fighters who fought with the army but were then largely abandoned to their terrible fate by De Gaulle. Some were forced to swallow their own French military medals and thrown into mass graves. 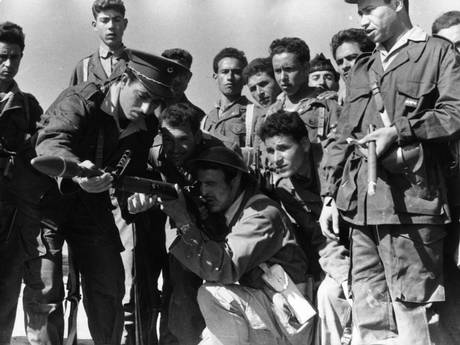 Algerian rebels training to use weapons in 1958 (Getty Images)

But the former French colonists, who still regarded Algeria as French – along with an exhausted FLN dictatorship which took over the independent country – instituted a cold peace in which Algeria’s residual anger, in France as well as in the homeland, settled into long-standing resentment. In Algeria, the new nationalist elite embarked on a hopeless Soviet-style industrialisation of their country. Former French citizens demanded massive reparations; indeed, for decades, the French kept all the drainage maps of major Algerian cities so that the new owners of Algeria had to dig up square miles of city streets every time a water main burst.

And when the Algerian civil war of the 1980s commenced – after the Algerian army cancelled a second round of elections which Islamists were sure to win – the corrupt FLN “pouvoir” and the Muslim rebels embarked on a conflict every bit as gruesome as the Franco-Algerian war of the 1950s and 1960s. Torture, disappearances, village massacres all resumed. France discreetly supported a dictatorship whose military leaders salted away millions of dollars in Swiss banks.

Algerian Muslims returning from the anti-Soviet war in Afghanistan joined the Islamists in the mountains, killing some of the few remaining French citizens in Algeria. And many subsequently left to fight in the Islamist wars, in Iraq and later Syria.

Enter here the Kouachi brothers, especially Chérif, who was imprisoned for taking Frenchmen to fight against the Americans in Iraq. And the United States, with French support, now backs the FLN regime in its continuing battle against Islamists in Algeria’s deserts and mountain forests, arming a military which tortured and murdered thousands of men in the 1990s.

As an American diplomat said just before the 2003 invasion of Iraq, the United States “has much to learn” from the Algerian authorities. You can see why some Algerians went to fight for the Iraqi resistance. And found a new cause…