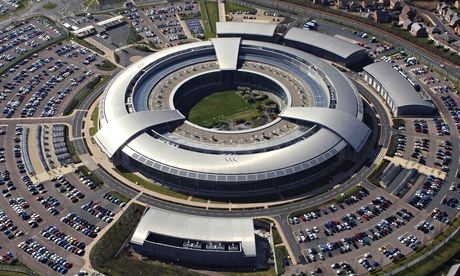 The journalists’ communications were among 70,000 emails harvested in less than 10 minutes on one day in November 2008 by GCHQ. Photograph: GCHQ/EPA

19 Jan 2015 – GCHQ’s bulk surveillance of electronic communications has scooped up emails to and from journalists working for some of the US and UK’s largest media organisations, analysis of documents released by whistleblower Edward Snowden reveals.

Emails from the BBC, Reuters, the Guardian, the New York Times, Le Monde, the Sun, NBC and the Washington Post were saved by GCHQ and shared on the agency’s intranet as part of a test exercise by the signals intelligence agency.

The disclosure comes as the British government faces intense pressure to protect the confidential communications of reporters, MPs and lawyers from snooping.

The journalists’ communications were among 70,000 emails harvested in the space of less than 10 minutes on one day in November 2008 by one of GCHQ’s numerous taps on the fibre-optic cables that make up the backbone of the internet.

The communications, which were sometimes simple mass-PR emails sent to dozens of journalists but also included correspondence between reporters and editors discussing stories, were retained by GCHQ and were available to all cleared staff on the agency intranet. There is nothing to indicate whether or not the journalists were intentionally targeted.

The mails appeared to have been captured and stored as the output of a then-new tool being used to strip irrelevant data out of the agency’s tapping process.

New evidence from other UK intelligence documents revealed by Snowden also shows that a GCHQ information security assessment listed “investigative journalists” as a threat in a hierarchy alongside terrorists or hackers.

Senior editors and lawyers in the UK have called for the urgent introduction of a freedom of expression law amid growing concern over safeguards proposed by ministers to meet concerns over the police use of surveillance powers linked to the Regulation of Investigatory Powers Act 2000 (Ripa).

More than 100 editors, including those from all the national newspapers, have signed a letter, coordinated by the Society of Editors and Press Gazette, to the UK prime minister, David Cameron, protesting at snooping on journalists’ communications.

In the wake of terror attacks on the Charlie Hebdo offices and a Jewish grocer in Paris, Cameron has renewed calls for further bulk-surveillance powers, such as those which netted these journalistic communications.

Ripa has been used to access journalists’ communications without a warrrant, with recent cases including police accessing the phone records of Tom Newton-Dunn, the Sun’s political editor, over the Plebgate investigation. The call records of Mail on Sunday reporters involved in the paper’s coverage of Chris Huhne’s speeding row were also accessed in this fashion.

Under Ripa, neither the police nor the security services need to seek the permission of a judge to investigate any UK national’s phone records – instead, they must obtain permission from an appointed staff member from the same organisation, not involved in their investigation.

However, there are some suggestions in the documents that the collection of billing data by GCHQ under Ripa goes wider – and that it may not be confined to specific target individuals.

A top secret document discussing Ripa initially explains the fact that billing records captured under Ripa are available to any government agency is “unclassified” provided that there is “no mention of bulk”.

The GCHQ document goes on to warn that the fact that billing records “kept under Ripa are not limited to warranted targets” must be kept as one of the agency’s most tightly guarded secrets, at a classification known as “Top secret strap 2”.

That is two levels higher than a normal top secret classification – as it refers to “HMG [Her Majesty’s government] relationships with industry that have areas of extreme sensitivity”.

Internal security advice shared among the intelligence agencies was often as preoccupied with the activities of journalists as with more conventional threats such as foreign intelligence, hackers or criminals.

One restricted document intended for those in army intelligence warned that “journalists and reporters representing all types of news media represent a potential threat to security”.

It continued: “Of specific concern are ‘investigative journalists’ who specialise in defence-related exposés either for profit or what they deem to be of the public interest.

“All classes of journalists and reporters may try either a formal approach or an informal approach, possibly with off-duty personnel, in their attempts to gain official information to which they are not entitled.”

It goes on to caution “such approaches pose a real threat”, and tells staff they must be “immediately reported” to the chain-of-command.

Terrorists, listed immediately above investigative journalists on the document, were given a much higher “capability” score of four out of five, but a lower “priority” of two. The matrix concluded terrorists were therefore a “moderate” information security risk.

A spokesman for GCHQ said: “It is longstanding policy that we do not comment on intelligence matters. Furthermore, all of GCHQ’s work is carried out in accordance with a strict legal and policy framework, which ensures that our activities are authorised, necessary and proportionate, and that there is rigorous oversight, including from the secretary of state, the interception and intelligence services commissioners and the parliamentary intelligence and security committee.

“All our operational processes rigorously support this position. In addition, the UK’s interception regime is entirely compatible with the European convention on human rights.