25 Jan 2015 – Greek voters have rebelled against the austerity programme imposed by Brussels and Berlin in return for loans to fund Greece’s massive debt. The radical left Syriza party, which promises better terms for Greece, won a decisive victory in the general election today and is close to winning an absolute majority in parliament.

New Democracy’s Prime Minister, Antonis Samaras, was defeated because he failed to end the bailout, get a Greek debt reduction, lift the economy out of deep recession despite some recent improvements and get the IMF removed from the much-hated troika (EU, ECB and IMF) that has exercised a near-colonial control over the Greek economy. 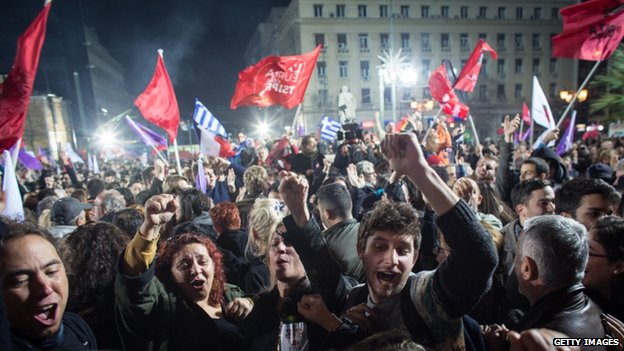 Crowds celebrated the victory late into the night in the capital Athens.

Syriza may seek to form a government on its own or it could look for allies such as Pasok and the Potami party. But it will soon find itself in a confrontation with the EU as it look for relaxation in the austerity that has reduced four million Greeks to poverty.

At the same time, Greece remains saddled with €240bn in debt that it is unable to repay but must continue to service. Continual cuts and tax rises made it impossible for Greece to escape from a deep recession despite marginal improvements last year.

Mr Tsipras says he does not want to leave the EU or the euro and neither option is popular in Greece. The EU will not want a relaxation to austerity in Greece because of the impact this would have on heavily indebted countries such as Italy, Spain and France.

The Greek rebellion against its EU economic overlords may provoke a prolonged economic siege as Syriza seeks to negotiate new terms for a bailout while the EU waits for a lack of money to force Greece to comply with existing agreements. Professor Aristides Hatzis of the University of Athens says: “It is like a game of chicken, with Greece and the EU driving towards each other and each hoping the other will swerve first to avoid a collision.” He adds that one must keep in mind the disparity in power between the two drivers. “The EU leaders are driving a German Mercedes and the Greeks are in a beat-up old jalopy.”

A new Greek government will immediately face problems because the creditor states have frozen $8.8bn (£5.9bn) in loan disbursements while the present government has reached a $17.4bn ceiling for bond sales under the EU programme. A Syriza government would have to rely on taxes but tax revenues are down as people wait to see if taxes will be reduced by the new government. This means that Greece may only have the money – though this is disputed by Syriza leaders – until the end of February to pay state employees and pensions and service the debt. At the same time, eurozone finance ministers will extend negotiations until September. 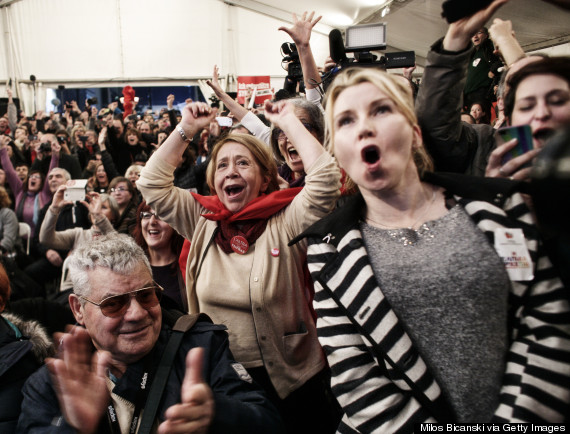 Supporters of the opposition radical leftist Syriza party cheer at exit poll results which indicate that Syriza have a clear lead on January 25, 2015 in in Athens, Greece. (Photo by Milos Bicanski/Getty Images)

This impending collision with the EU frightens Greeks, but they also feel that five years of being dictated to by Brussels and Berlin has brought them nothing but pain. The Prime Minister Antonis Samaras told his supporters at a final rally, held in a closed stadium built for the Taikwondo championships in the 2004 Olympics, that Greeks would be “committing national suicide” if they voted for the radical left in the shape of Syriza.

Expectations are not that high even among Syriza activists. At a polling station in central Athens today, Vanda Theodorou, a keen Syriza supporter, said: “When it comes to unemployment I don’t think we can do much if we form the government. But we will make improvements in health by providing healthcare for the unemployed.” The unemployed receive €300 to €400 a month during the first year they are without a job and after that nothing.

Ms Theodorou, formerly a journalist, said she had been unemployed since 2007 and so were her two daughters. She said “the state has not provided any social safety net and treats people like garbage”. She pointed to her mouth, which was swollen, and said that her jaw had been broken in a car crash last year and she needed to have many of the smashed teeth replaced, but could not afford to do so.

The degree of radical change Syriza can introduce even with an absolute majority will be limited by its lack of money and the unwillingness of 75 per cent of Greeks to leave the euro because a return to the drachma is not really feasible. Greece imports most of its needs and has no important allies in its confrontation with the EU. On the other hand, as the first radical-left government in Europe for decades, it will fight very hard to show that it can deliver on its promises to give free electricity to those cut off, provide food stamps for children, provide healthcare to the uninsured, provide accommodation to the homeless and raise the minimum wage from under €500 a month to €750.

Greeks view the outcome of the election with a mixture of hope and trepidation. Antonios, a businessman in the financial services sector who supports the New Democracy Party, says he fears that a Syriza victory will destabilise the country and lead to a reverse of many reforms. “Already people are moving money out of Greece,” he says. “The recession that is beginning to ease may get worse again. I hope there won’t be a bank run on Monday, but it could happen.” With the economy so badly damaged, Antonios understands why popular resentment runs very deep.

The election has once again opened up the deep traditional divisions between left and right in Greece, rooted in the German occupation, the civil war, the rule of the colonels up to 1974 and the unprecedented economic collapse of the last five years.

“A vote for Syriza is a vote for anger,” says Professor Hatzis. There is fury that the better-off and the oligarchs have succeeded in avoiding paying for a financial disaster that was largely of their making. He says that Mr Samaras’s government wanted to satisfy the demands for reform by the Troika by introducing “across-the-board cuts in order to avoid structural reform”. The corrupt clientist system in which financial oligarchs had a large measure of control over Greek politics was largely the creation of the New Democracy and Pasok parties that lost so heavily in the election. “The Greek government has protected the oligarchy and the cartels over the last two years,” says Professor Hatzis.

In theory, a radical party like Syriza is in a far better position to introduce structural reforms than that of Mr Samaras representing the political and economic establishment. One of the problems for the Troika is that it is the very fact change was being imposed by abroad, and most notably by Germany, which delegitimised necessary reforms. Compromise between Greece and the EU should be possible, but the problem remains that the EU leaders hold all the high cards and may be tempted to impose their will regardless of whom the Greeks vote for. The Greeks also fear that the priority for the Germans and North Europeans is to continue to be tough on Greece in order to send a warning to governments in Spain, Italy and France that they must stick to austerity.

One Response to “Greece Elections: Syriza and EU on Collision Course after Election Win for Left-Wing Anti-Bailout Party”