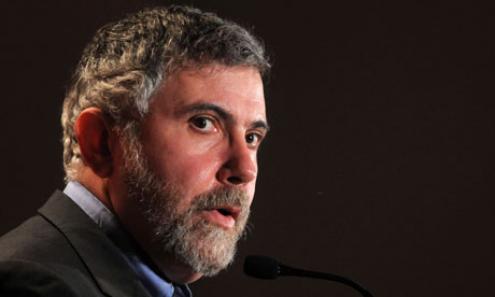 26 Jan 2015 – Alexis Tsipras, leader of the left-wing Syriza coalition, is about to become prime minister of Greece. He will be the first European leader elected on an explicit promise to challenge the austerity policies that have prevailed since 2010. And there will, of course, be many people warning him to abandon that promise, to behave “responsibly.”

So how has that responsibility thing worked out so far?

To understand the political earthquake in Greece, it helps to look at Greece’s May 2010 “standby arrangement” with the International Monetary Fund, under which the so-called troika — the I.M.F., the European Central Bank and the European Commission — extended loans to the country in return for a combination of austerity and reform. It’s a remarkable document, in the worst way. The troika, while pretending to be hardheaded and realistic, was peddling an economic fantasy. And the Greek people have been paying the price for those elite delusions.

You see, the economic projections that accompanied the standby arrangement assumed that Greece could impose harsh austerity with little effect on growth and employment. Greece was already in recession when the deal was reached, but the projections assumed that this downturn would end soon — that there would be only a small contraction in 2011, and that by 2012 Greece would be recovering. Unemployment, the projections conceded, would rise substantially, from 9.4 percent in 2009 to almost 15 percent in 2012, but would then begin coming down fairly quickly.

What actually transpired was an economic and human nightmare. Far from ending in 2011, the Greek recession gathered momentum. Greece didn’t hit the bottom until 2014, and by that point it had experienced a full-fledged depression, with overall unemployment rising to 28 percent and youth unemployment rising to almost 60 percent. And the recovery now underway, such as it is, is barely visible, offering no prospect of returning to precrisis living standards for the foreseeable future.

What went wrong? I fairly often encounter assertions to the effect that Greece didn’t carry through on its promises, that it failed to deliver the promised spending cuts. Nothing could be further from the truth. In reality, Greece imposed savage cuts in public services, wages of government workers and social benefits. Thanks to repeated further waves of austerity, public spending was cut much more than the original program envisaged, and it’s currently about 20 percent lower than it was in 2010.

Yet Greek debt troubles are if anything worse than before the program started. One reason is that the economic plunge has reduced revenues: The Greek government is collecting a substantially higher share of G.D.P. in taxes than it used to, but G.D.P. has fallen so quickly that the overall tax take is down. Furthermore, the plunge in G.D.P. has caused a key fiscal indicator, the ratio of debt to G.D.P., to keep rising even though debt growth has slowed and Greece received some modest debt relief in 2012.

Why were the original projections so wildly overoptimistic? As I said, because supposedly hardheaded officials were in reality engaged in fantasy economics. Both the European Commission and the European Central Bank decided to believe in the confidence fairy — that is, to claim that the direct job-destroying effects of spending cuts would be more than made up for by a surge in private-sector optimism. The I.M.F. was more cautious, but it nonetheless grossly underestimated the damage austerity would do.

And here’s the thing: If the troika had been truly realistic, it would have acknowledged that it was demanding the impossible. Two years after the Greek program began, the I.M.F. looked for historical examples where Greek-type programs, attempts to pay down debt through austerity without major debt relief or inflation, had been successful. It didn’t find any.

So now that Mr. Tsipras has won, and won big, European officials would be well advised to skip the lectures calling on him to act responsibly and to go along with their program. The fact is they have no credibility; the program they imposed on Greece never made sense. It had no chance of working.

If anything, the problem with Syriza’s plans may be that they’re not radical enough. Debt relief and an easing of austerity would reduce the economic pain, but it’s doubtful whether they are sufficient to produce a strong recovery. On the other hand, it’s not clear what more any Greek government can do unless it’s prepared to abandon the euro, and the Greek public isn’t ready for that.

Still, in calling for a major change, Mr. Tsipras is being far more realistic than officials who want the beatings to continue until morale improves. The rest of Europe should give him a chance to end his country’s nightmare.

A version of this op-ed appears in print on January 26, 2015, on page A21 of the New York edition with the headline: Ending Greece’s Nightmare.

One Response to “Ending Greece’s Nightmare”