With his casual shirt and jeans, Yanis Varoufakis is throwing down the gauntlet to the established European banking order. 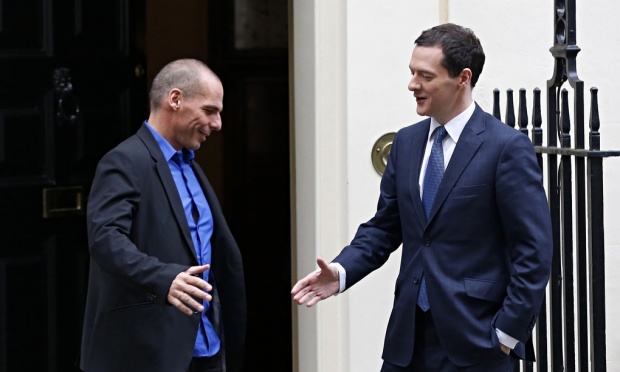 A yawning gulf has opened in the world of financial diplomacy. It is not whether to bail out Greece yet again. It is how a Greek finance minister should dress when visiting a chancellor of the exchequer. Yanis Varoufakis arrived in Downing Street yesterday in black jeans, a mauve open-necked shirt that was not tucked in, and the sort of leather coat Putin might wear on a bear hunt. If George Osborne still didn’t get the point, Varoufakis had a No 1 haircut. What was going on?

What was going on was real life. If I were a banker and had seen Varoufakis arrive in the same dark suit as Osborne was wearing, what would I think? I would think here was a man eager to be accepted into the club. He dresses like a banker, therefore he thinks like a banker, which is how today’s finance ministers are supposed to think. I would be reassured.

We don’t want bankers to be reassured by Varoufakis just now. We want them to be terrified. Don’t mess with me, he is saying. I have a sovereign electorate behind me, and I have a bankrupt country. When your banks go bankrupt you bail them out. When your businesses go bankrupt you write off their debts and let them start again. Do the same to me. Your banks have lent my country crazy sums of money, way beyond the bounds of caution or common sense. Now you honestly think you will get it back. You can’t. Read my lips, look at my jeans, feel my stubble. You can’t. Get real.

Europe just now needs the shock of Varoufakis’s livery. It needs to be jolted out of any belief that Greeks can be made to return mostly Germany’s reckless loans by being plunged into perpetual penury. We know this is not possible. It is the economics of Little Dorrit, with Greece in the Marshalsea prison. It is exactly the mistake Europe made, ironically in handling Germany, over war reparations in 1919. Look where that led.

The eurozone, fashioned as a deutschmark zone, was a disaster waiting to happen, and not just for its poorer members. That disaster has happened.

Greece, and now all of Europe, are suffering because Europe is still being run by and for bankers who simply want their money back. This cannot continue, and Greece’s recent election is a golden opportunity to snap out of it. With luck Spain will follow and perhaps Italy, until the eurozone shrinks to a size capable of being responsibly managed.

Meanwhile Greece has a finance minister who looks like a normal human being. That is a start.