Is Your Child a Terrorist? U.S. Government Questionnaire Rates Families at Risk for Extremism 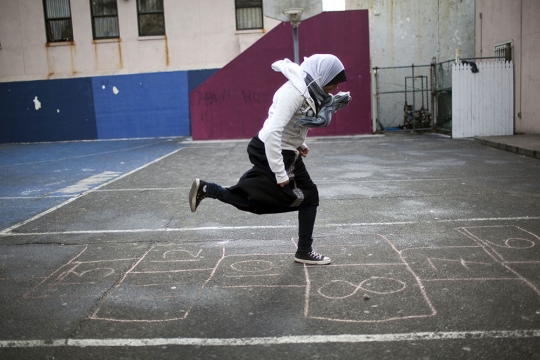 Are you, your family or your community at risk of turning to violent extremism? That’s the premise behind a rating system devised by the National Counterterrorism Center, according to a document marked For Official Use Only and obtained by The Intercept.

The document–and the rating system–is part of a wider strategy for Countering Violent Extremism, which calls for local community and religious leaders to work together with law enforcement and other government agencies. The White House has made this approach a centerpiece of its response to terrorist attacks around the world and in the wake of the Paris attacks, announced plans to host an international summit on Countering Violent Extremism on February 18th.

The rating system, part of a 36-page document dated May 2014 and titled “Countering Violent Extremism: A Guide for Practitioners and Analysts,” suggests that police, social workers and educators rate individuals on a scale of one to five in categories such as: “Expressions of Hopelessness, Futility,” “Talk of Harming Self or Others,” and “Connection to Group Identity (Race, Nationality, Religion, Ethnicity).” The ranking system is supposed to alert government officials to individuals at risk of turning to radical violence, and to families or communities at risk of incubating extremist ideologies.

Families are judged on factors such as “Aware[ness] of Each Other’s Activities,” as well as levels of “Parent-Child Bonding,” and communities are rated by access to health care and social services, in addition to “presence of ideologues or recruiters” as potential risk factors.

A low score in any of these categories would indicate a high risk of “susceptibility to engage in violent extremism,” according to the document. It encourages users of the guide to plot the scores on a graph to determine what “interventions” could halt the process of radicalization before it happens.

“The idea that the federal government would encourage local police, teachers, medical and social service employees to rate the communities, individuals and families they serve for their potential to become terrorists is abhorrent on its face,” said Mike German, a former FBI agent who is now with the Brennan Center for Justice at New York University School of Law. German called the criteria used for the ratings “subjective and specious.” 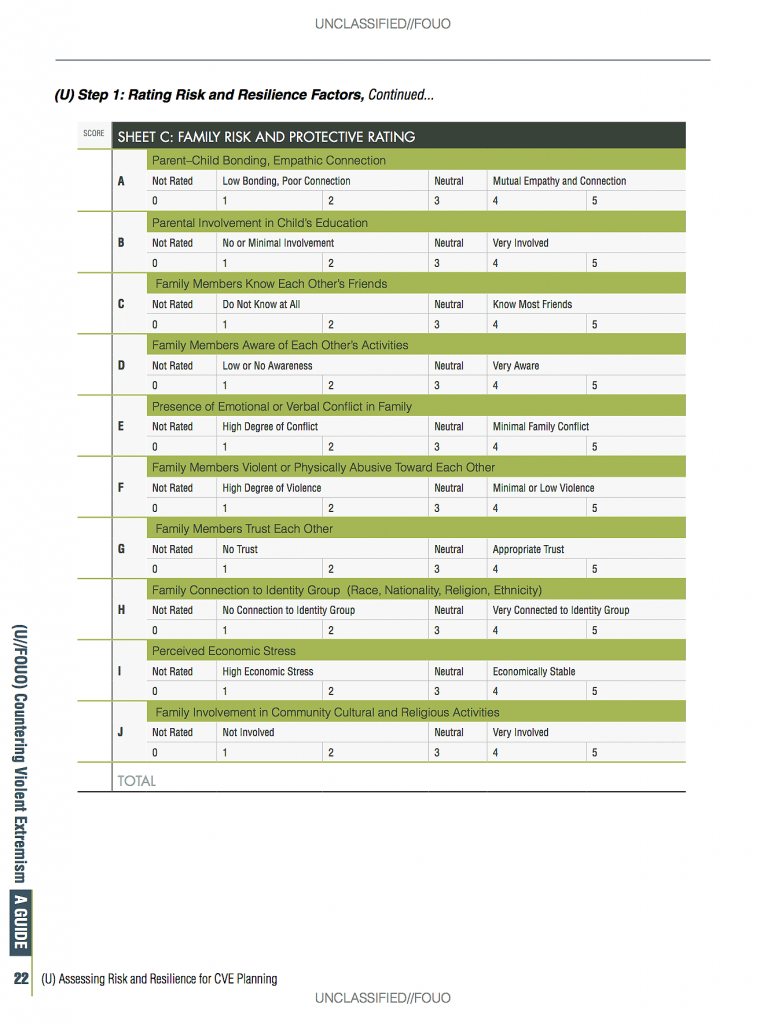 Arun Kundnani, a professor at New York University, said that enlisting communities in the way the administration suggests in the guide, “leads a range of non-policing professionals to cast particular suspicion on Muslim populations and profile them for behaviors that have no real connection to criminality.”

Kundnani also questioned the science behind the rating system. “There’s no evidence to support the idea that terrorism can be substantively correlated with such factors to do with family, identity, and emotional well-being,” he said.

The guide itself notes that the effects of Countering Violent Extremism programs are “not easy to quantify.”

The U.S. government isn’t alone in its attempts to spot youth allegedly at risk of becoming terrorists. The government of France recently issued a widely mocked graphic demonstrating ostensible warning signs of radicalization, which suggested that abrupt diet or lifestyle changes are correlated with proclivities for violent extremism. (White House counterterrorism adviser Lisa Monaco last April warned parents and community members to look out for “subtle” signs, like “sudden personality changes in their children at home—becoming confrontational.”)

The British government has put forward a plan to begin monitoring signs of radicalization at the pre-school level, and in the wake of the Charlie Hebdo attacks, children in France as young as eight years old have been detained and questioned by police for allegedly espousing radical views.

Experts have suggested that intervention by law enforcement or other branches of the government in individuals’ lives, particularly young people, based solely based on the views they express, can potentially criminalize constitutionally protected behavior.

In some cases, as The Intercept has reported, community outreach from law enforcement has also crossed the line into intelligence gathering.

Most of the document is a review of the literature on a  variety of approaches to dealing with the threat of radicalization. Examples given include a community policing program in Lewiston, Maine (population 36,000), and Saudi Arabia’s rehabilitation program for former jihadists, including Guantanamo detainees.

Though the White House has insisted that Countering Violent Extremism is not directed at any specific group, the NCTC guide only cites examples drawn from Muslim communities.

“It is obvious that, in practice, [this] would mostly only be applied to Muslim communities,” said Kundnani, the NYU professor.

A public affairs officer for the National Counterterrorism Center declined to answer questions about the rating system, the methodology behind it, or why the document was marked For Official Use Only.

See the full document here (or download it as a PDF.)