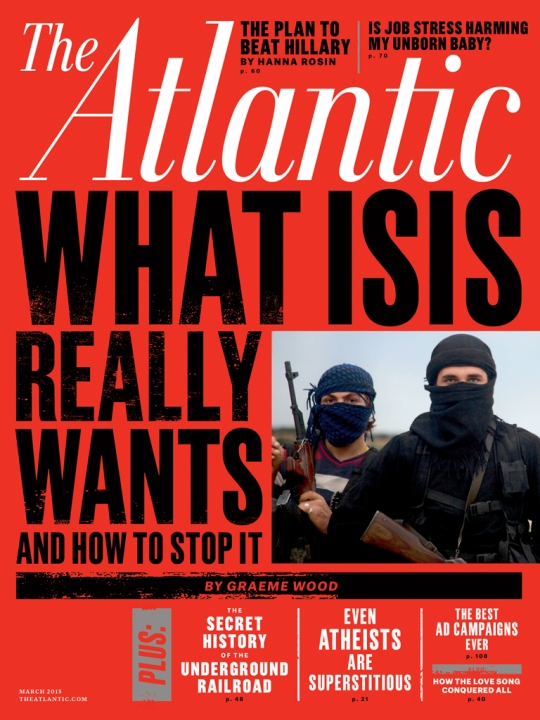 20 Feb 2015 – Despite what its many critics (including President Obama) will tell you, the Islamic State is indeed Islamic, and actually very Islamic, according to ISIS itself — and also according to The Atlantic, which endorsed the group’s narrative in a widely circulated essay published this week entitled “What ISIS Really Wants.”

In the piece, author Graeme Wood makes the case that the militant group — whose actions have sparked protests and widespread revulsion around the world — represents a highly authentic version of Islam. Far from being an aberrant or deviant offshoot of traditional Islamic beliefs, it is described as being a faithful expression of them — representing “a coherent and even learned expression of Islam.” While the author notes that the overwhelming majority of Muslims do not share the views of Islamic State, and indeed see the group as un-Islamic, he denies that their version of the religion is more genuine.

“In the past, Westerners who accused Muslims of blindly following ancient scriptures came to deserved grief from academics,” Wood writes, citing the example of Edward Said and others who called for academics to focus on the social conditions in which religious extremism takes root. “But focusing on [social conditions] to the exclusion of ideology reflects another kind of Western bias: that if religious ideology doesn’t matter much in Washington or Berlin, surely it must be equally irrelevant in Raqqa or Mosul.”

Wood is right in pointing out that there are people in the world today — including those carrying black banners in places like Raqqa and Mosul — who take religion very seriously.

But just as a failure to recognize this fact may represent the bias of a Western observer, there is also a glaring bias in dismissing or ignoring the great mass of established and recognized religious scholars of Islam in the Muslim world whose theological conclusions are starkly at odds with the radical revisionism of Islamic State.

Indeed, there are actually people alive in our modern world who have spent their entire lives studying and practicing Islam in conjunction with philosophy, history and linguistics, and who also take seriously the idea of being “very Islamic.” They also happen to represent an established tradition of mainstream religious scholarship which millenarian groups like ISIS have made it their stated mission to eradicate.

One prominent example of this is the “Letter to al-Baghdadi,” in which some of the most prominent Islamic scholars in the world condemned the actions of ISIS on a purely theological basis as representing a heretical version of Islam. Far from being a reflexive or apologetic statement, the arguments contained therein are grounded in long-established precepts of religious jurisprudence intended to prescribe the rules and bases of personal and social conduct for practicing Muslims.

What makes groups like Islamic State “radical” in the first place is that they reject all these centuries of scholarship and tradition, and innovate a newly “reformed” Islam — often pieced together with concepts of ideology and organization drawn from contemporary fascist and Marxist-Leninist movements. Such freelancing is a common characteristic of Islamic extremist groups, and despite their pretensions to ancient revivalism it is also a reflection of their inescapably modern revolutionary heritage.

Unfortunately, however, The Atlantic chooses to elide this context and accept the self-definition of Islamic State without question. In the article, arguments put forward by I.S.’s Muslim critics are invoked without content, only to be dismissed as “embarrassed and politically correct” and a “cotton-candy view of their own religion.”

The beliefs of Islamic State on the other hand are expounded upon at length. In arguing the case for Islamic State’s religious legitimacy, The Atlantic quotes exactly one Western academic, Bernard Haykel, a Princeton scholar of Near Eastern Studies, whom the author says he approached because “every academic I asked about the Islamic State’s ideology sent me to [him].”

From there, Wood does a brief tour of several Western cities where he has serious sit-downs with the world’s most hyperbolic and media-friendly Islamic extremists. This entails traveling to places like London and Melbourne to seek out the opinions of people such as British radical Anjem Choudary and Musa Cerantonio, who lack any religious credentials or mainstream following, and whose qualifications seemingly do not extend past their ability to behave provocatively in front of journalists.

Despite his extensive travels, however, Wood evidently did not deem it necessary to speak with anyone recognized by Muslims as an authority in their own religion, or to hear out any religiously-based arguments which might make a counterpoint to his thesis.

It seems like a fairly consequential oversight to ignore the views of influential and traditional scholarly figures like Shaykh Hamza Yusuf, Zaid Shakir and Sayyid Hossein Nasr — all of whom who have spoken at length in religious terms against the Islam preached by Islamic State, and who are easily accessible to an English-language, American publication.

At worst, such an approach replicates the irritating practice of writing about foreign or minority populations as though they are passive subjects with no voice of their own, save for fringe characters who can be relied upon to confirm a particular narrative.

Such a style of writing and argumentation may make for enjoyable reading to a casual observer attempting to gauge the relationship between ISIS and Islam from the outside. And indeed, the piece is erudite, well-written, and one may even say well-intentioned despite its flaws.

But the underlying premise is nonetheless poorly substantiated.

While Wood is correct to push back against the flawed notion that Islamic State has absolutely no relation to Islam, he neglects to engage the predominant view that the group embodies one of the heretical versions of the religion that have cropped up periodically throughout history.

The end result is a 10,000-word exercise in confirmation bias. If the Islamic State is indeed, as Wood claims, “very Islamic,” his essay makes an unconvincing case of it to anyone familiar with the historical and religious context in which the group has arisen.