‘Why must low-level criminal activity by animal rights activists be prosecuted in federal court?’ 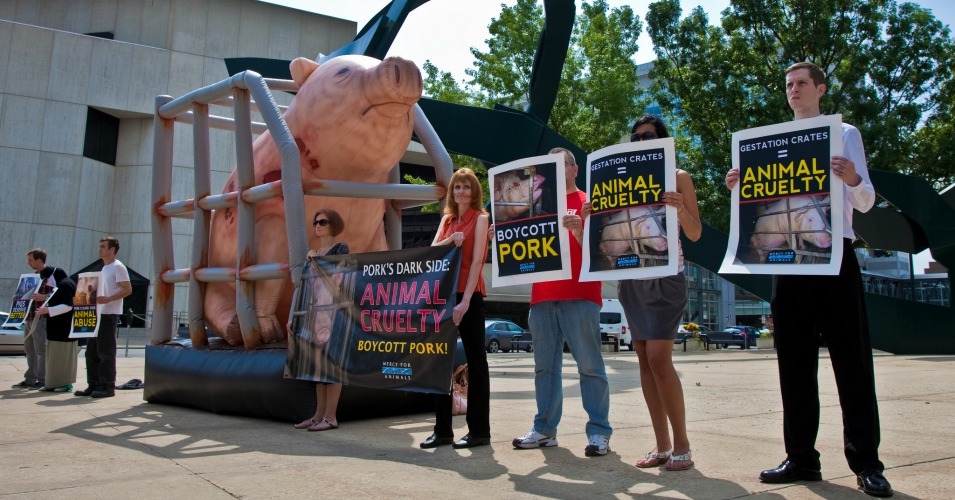 Are animal rights protests like this one, which took place in Iowa in 2012, ‘terrorist’ activity? (Photo: Justin Norman/flickr/cc)

Two activists are scheduled to appear in a federal district court in Chicago on Thursday [19 Feb 2015], marking the first time that the Animal Enterprise Terrorism Act (AETA)—which criminalizes protected speech and protest activities that cause an ‘animal enterprise’ to lose profits—will be legally challenged as a violation of the U.S. Constitution.

“The Animal Enterprise Terrorism Act is a poorly disguised attempt to chill legitimate advocacy by an unpopular group of activists,” said Center for Constitutional Rights senior staff attorney Rachel Meeropol, who argued for the defendants in court. “Liberating animals is not terrorism.”

Kevin Johnson, 27, and Tyler Lang, 25, face up to 10 years in prison for allegedly releasing thousands of mink and foxes from fur farms in the Midwest in 2013. They were indicted in July 2014 under the AETA on federal charges of conspiracy and interstate travel to damage and interfere with the operations of an animal enterprise.

“The recent charges brought against Kevin and me are not only wrong but egregious,” Lang stated last year in response to the charges, on a blog dedicated to supporting the activists. “When we think of terrorism, we think of violence being committed against individuals. The government’s ‘terrorist’ targeting of two friends with a history of speaking out against injustice is an affront to the meaning of what violence really is, and a slap in the face to a public that sadly knows what terrorism actually looks like.”

According to the Chicago Tribune, “Lang and Johnson were accused in the indictment of driving through Iowa, Wisconsin and Illinois in August with plans to damage animal farms. On Aug. 14, they stopped at a mink farm in Morris, Ill., that ‘was in the business of breeding, raising and selling mink to fur manufacturers,’ released about 2,000 mink from their cages, and spray-painted ‘LIBERATION IS LOVE’ in big red letters on the side of a barn.”

The day after that incident, the Los Angeles-based activists had their car searched in a routine traffic stop in Illinois. Police found bolt and wire cutters, ski masks, and camouflage clothing—equipment deemed to be ‘burglary tools.’ They were arrested and eventually pleaded guilty to state charges. Lang was released from prison on a plea deal in November and is out on bond, while Johnson remains in custody awaiting the federal trial.

On Thursday, they urged the court to dismiss the case against them, on the grounds that the AETA is a violation of constitutional due process because it applies the term ‘terrorism’ to the nonviolent theft of private property and violates the First Amendment by criminalizing boycotts, picketing, and other constitutionally-protected activity. The motion to dismiss (pdf) argues that the AETA language is vague, overly broad, and “susceptible to discriminatory enforcement.”

“Applied evenhandedly, the AETA would federalize every act of theft, libel, or vandalism against every food or retail store in the country, so long as there is an interstate component,” the motion points out.

“An individual who is successfully prosecuted under the AETA will be a ‘convicted terrorist’,” the defendants further note, referring to how the law violates due process by applying a misleading label to a serious crime. “This labeling carries obvious and significant stigma and could potentially prejudice jurors; moreover, it has a real impact on conditions of incarceration.”

Finally, the motion reads: “Causing damage or loss to real or personal property is not terror, because it is not inherently violent.”

The facts of the case raise one glaring question, writes CCR’s Meeropol in an op-ed published Thursday: “Why must low-level criminal activity by animal rights activists be prosecuted in federal court?”

The answer becomes clear when we consider that those who lobbied for the AETA are also those who stand to lose the most as the idea of animal rights gains acceptance—organizations like the American Meat Institute, National Milk Producers Federation, and the Fur Commission USA. The profits of these industries depend not only on keeping animals inside cages but, more significantly, on keeping the idea of animal rights marginalized. Losing a few animals is pocket change; losing a public that pours billions of dollars into those pockets risks sending Big Ag and its compatriot ‘animal enterprises’ the way of the tobacco industry.

When it comes to protecting the profits of multi-billion dollar ‘animal enterprise’ industries, the government wants to have it both ways. In the court of public opinion, it wants to be able to wield the AETA’s terrorism rhetoric against unpopular activists—but it wants to simultaneously avoid scrutiny in a court of law over calling nonviolent activism ‘terrorism.’

The AETA was signed into law by President George W. Bush in 2006. A previous legal challenge, Blum v. Holder, was thrown out of federal court by Judge Joseph Tauro in 2013.