16 Feb 2015 – For those interested in peace and the non-violent resolution of conflict the prognosis is not good. Not just because the war on terror keeps producing enemies with whom, it is said, there is no negotiating, but because the legal and political framework it has engendered has transformed the way in which political violence and armed conflict are understood and managed. 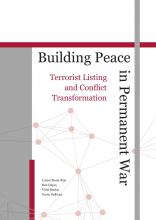 Peacebuilding in a War without End

As the global ‘war on terror’ continues to unfold, a new enemy ‘even more extreme’ than Al-Qaida has breathed new life into a legal, political and military campaign that many people thought, or hoped, would be temporary or exceptional. Instead, the ‘age of permanent war’ envisaged by some of its principal architects is back with a vengeance. As the bombs fall on Islamic State in Iraq and Syria, a swathe of new individuals and groups are designated by the UN Security Council as ‘associated with’ Al- Qaida, and counterterrorism statutes across the world are transformed to prevent ‘foreign fighters’ joining ISIS and to counter radicalisation, recruitment and extremism domestically.

For those interested in peace and the non-violent resolution of conflict the prognosis is not good. Not just because the war on terror keeps producing enemies with whom, it is said, there is no negotiating, but because the legal and political framework it has engendered has transformed the way in which political violence and armed conflict is understood and managed.

At the heart of this transformation is the freedom for governments to apply the terrorist label to groups and individuals on the basis of very broad definitions of what ‘terrorism’ entails, or in the absence of any meaningful criteria at all – leading to a glut of terrorist designations. Longstanding armed conflicts between states and non-state actors have been recast into domestic wars on terror, undermining principles of international law that govern the legitimate use of violence. Meanwhile, counterterrorism has been used by repressive governments to systemise state violence, and as a pretext to repress opposition of every political stripe: from social and religious, to protest and separatist. The research that follows explores the impact of terrorist proscription and counterterrorism laws on peacebuilders and peacebuilding more generally.

Counterterrorism and peacebuilding are understood as distinct responses to political violence that may be deployed independently or in tandem by local and national governments and international actors. We are concerned with the tensions between these strategies that emerge at the legal, political and practical level. This report represents the first study to connect analysis of counterterrorism laws together with an attempt to assess the impact of terrorist proscription on peacebuilding.

The report combines legal and political analysis with in-depth case studies including the testimony of those engaged in conflict transformation. It focuses on the use of counterterrorism law and policy in the management of conflict with Al-Shabaab in Somalia, Hamas in the Occupied Palestinian territories, and the Kurdistan Workers’ Party in Turkey.

The impetus for the report was the authors’ own experience and engagement with counterterrorism laws. We have long been concerned that terrorist proscription regimes – the laws and powers that allow executive actors to designate individuals and entities as terrorist – do not stop at those who perpetrate, or threaten acts of violence for political ends. Rather, they are designed to ensnare the financial, material and ideological supporters of groups listed as terrorist as well as broader forms of social affiliation – that is, to delegitimise both listed groups and the networks around them by disrupting forms of association.

A plethora of international, regional and national lists now span the globe, containing thousands of designated terrorist entities and their perceived and alleged supporters. As well as implementing UN sanctions regimes, a number of UN Security Council Resolutions impose legal obligations on states to institute domestic counterterrorism laws. In addition to criminalising non-state armed groups, political parties, non-government organisations (NGOs), charities, activists, dissidents and others have inevitably been caught in the net, whether listed directly or through association with listed parties. The effects vary according to the applicable legal regime, but the sanctions typically include asset-freezes, travel bans, arms embargoes and the criminalisation of membership and support for banned groups.

While practices of rendition, torture and drone strikes have elicited far more interest on the part of the media and human rights organisations, academic lawyers have spent more than a decade discussing the fundamental problems of terrorist listing. Initially these concerns focused on issues pertaining to executive power (who decides on listing?); the nature of the supranational legal order (what effects do UN lists have on national legal systems?); due process (how does someone get off the list?) and individual rights (can the interference with property, reputation, association and movement etc. be legally justified?). Over time, political scientists, criminologists, security scholars and others have stressed the increasing pervasiveness of preemption to advance the war on terror, both within and well beyond the confines of criminal law.

More recently, attention has focused on the impact of these regimes on aid and development organisations, who have found themselves unable to carry out their mandates for fear of breaching terrorist sanction regimes or falling foul of laws criminalising ‘material support’ for terrorism or the financing of terrorism. This has resulted in some states granting very limited ‘humanitarian exemptions’ for organisations providing aid and relief to populations in areas controlled or frequented by proscribed terrorist organisations.

In 2010, this debate expanded to encompass the activities of other non-governmental organisations engaged with proscribed groups. The non-profit Humanitarian Law Project’s pre-enforcement challenge to the material support provisions in the USA’s PATRIOT Act sought to overturn what it saw as overbroad provisions in the law. Instead, the US Supreme Court found that the Project’s proposed assistance to the proscribed Kurdistan Workers’ Party (PKK) in Turkey and Liberation Tigers of Tamil Eelam (LTTE) in Sri Lanka – which took the form of training in humanitarian and international law for conflict resolution – could indeed constitute material support as envisaged by the legislature. And because those provisions can be applied extra-territorially, anyone providing this kind of material support to proscribed groups irrespective of location or nationality could potentially face prosecution and incarceration in the US.

Although the ruling sent shock waves through the peacebuilding community, there have been surprisingly few attempts to reconcile the idea that counterterrorism measures which target associations are not simply ‘unintended consequences’. The prosecution of the war on terror had already presented a formidable challenge to those seeking the peaceful resolution of conflicts caused by legitimate or long-festering grievances. In this context, how could professional mediators, peacebuilding organisations and other conflict resolution actors continue to engage in confidence that their activities were both legitimate and lawful?

This uncertainty was exacerbated because as terrorist listing has proliferated around the world, US laws have become embedded in a complex, global legal regime. If this globalised regime also views aspects of peacebuilding as providing legitimacy to non-state armed groups, are the fundamental norms of conflict resolution being reshaped?

In our view, these questions have not been answered satisfactorily. There is a growing consensus that laws prohibiting support to listed entities have contributed to a ‘shrinking space’ for those seeking to establish the conditions conducive to peace.

Peacebuilders have pointed to a reduced engagement with listed entities and compromised neutrality as evidence that listing erodes inclusive conflict transformation norms and a focus on addressing the root causes of conflict. There is, however, very little certainty regarding the legal and political implications of the lists for third-party engagement with entities and individuals designated as terrorist. In findings that should give the sector pause for thought, we suggest that disrupting and undermining core elements of emancipatory peacebuilding work are a central feature of the international counter-terrorism framework.

Ben Hayes is a TNI fellow who has worked for the civil liberties organisation Statewatch since 1996, specialising in international and national security and policing policies. Ben also works as an independent researcher and consultant for organisations including the European Centre for Constitutional and Human Rights, Cordaid, the Heinrich Boll Foundation, the European Parliament and European Commission. He has a PhD from Magee College (Derry/Londonderry) awarded by the University of Ulster in 2008. He is currently working on a book on climate change and international security for TNI.

Gavin Sullivan is a solicitor (UK), Doctoral Candidate at the University of Amsterdam and Coordinator of the Transnational Listing Project – a global law clinic providing pro bono representation to people targeted by security lists. His research focuses on global counterterrorism, pre-emptive security and the politics of transnational law. He has worked as a human rights lawyer (in both the UK and Germany) and as legal advisor to peacebuilding organisations operating in Somalia.

Dr Louise Boon-Kuo is a lecturer at the Faculty of Law, University of  Sydney. Louise researches practices of criminalisation, counterterrorism, migration and citizenship. Louise’s forthcoming book Mobility, Citizenship and Illegality: the Policing of Undocumented Migrants in Australia (Ashgate, 2015) investigates the experiences and legal regulation of undocumented migrants.

Dr Vicki Sentas is a lecturer in law at the University of New South Wales, Australia and an associate of the International State Crime Initiative (ISCI). Her research has focused on the effects of counter-terrorism on self-determination movements and migrant diasporas. She is also engaged in projects about over-policing and police accountability. Her recent book Traces of Terror: Counter-Terrorism Law, Policing and Race (Oxford University Press 2014) examines the effects of counter-terrorism law and policing on ethnic minority and Muslim communities in Australia.