China and Its Economic and Geopolitical Eurasian Strategy

“….in the meantime it is imperative that no Eurasian challenger (to the US) emerges capable of dominating Eurasia and thus also of challenging America.”
Zbigniew Brzezinski, The Grand Chessboard, April 1997

For several decades and centuries, the European and Asian colonial powers fought among themselves for control of foreign lands, cultures (predominantly language and religion) and economic gains resulting in mass killings and two devastating world wars on their soils that ended in the decline of several major world powers and the rise of the United States as an empire in the last decade of twentieth century. Since 2001 the world has belonged politically and economically to this empire which has continued to devastate the Middle East and subjugate every other country through the United Nations and its political, economic and social instruments. The US has, since World War 2, shared the spoils of war with the European ex-colonial powers through what is the New World Order (NWO) and military might of NATO. The NWO will be challenged by Russia and China within the group of BRICS (Brazil, Russia, India, China and S. Africa) and Shanghai Cooperation Organization (SCO). These two countries pose the highest risk to the failure of the NWO. Currently Russia is directly in the line of NWO through the strangulation of its economic lifeline of oil and geo-political situation in Ukraine.

In a recent article “Is Peace or War at Hand?” Paul Craig Roberts had stated that Russia tried to be a part of the West and made the strategic error that endangered its independence. Russia found itself dependent on Western financial systems that gave Washington power over Moscow and allowed Washington to place economic sanctions on Russia. That provides important lessons learnt for China which is and has always been a part of the geographical and cultural East. China has a deep mistrust of the European intentions which dates back to the Anglo-Chinese wars between 1839-1842 or what the 20th century nationalists call “the century of humiliation”. The ardent student of Chinese political history would well know the roots of the wars, European treachery and the resulting devastation of China. 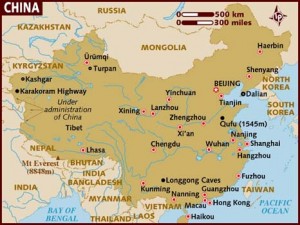 China is an economic giant and it well understands that in due time the US empire and its European vassals will try to eliminate the risk to their NWO by similar economic and political actions against China as it has carried out against Russia. Recently I published an article in the Oriental Review titled The New Global Economy: Rise of China and Decline of USA. Like Russia, China is not a part of the cultural heritage of the West and more so because the neocon NWO architecture and fundamentals has its natural birth, support and roots in the West, not in Russia or in China. The two countries cannot be trusted to support the NWO charter of a world government. In a Financial Post article titled China has crossed a Major Investment Threshold that is going to change the Entire World, Stefano Pozzebon wrote “Not only is China on the verge of becoming a net exporter of capital, it has already overtaken its Western counterparts as a primary source of credit for the developing world. From this financial prominence it will likely want to exercise political influence, too.” Mr. Pozzebon has highlighted and summarized China’s overseas investments of $870 billion.

By the early part of the next decade several Asian countries are going to impact the global and Eurasian geo-political balance in favor of China due to its economic influence similar to that of the US with Europe. China will emerge as the Eastern power to counter the Western power of the US. Russia has failed in its efforts to be accepted as a part of the West which has now pushed it into Chinese arms. Russia has considerable political influence with its former colonies who, along with founding members Russia and China, are a part of the SCO (other founding members being Kyrgyzstan, Kazakhstan, Tajikistan and Uzbekistan).

The two countries that are going to make the most significant difference in their relations with China will be Pakistan and Iran. The latter two countries are the fault line Muslim countries that are being drawn by the former towards the Eastern Chinese civilization and away from the Western civilization. Iran is a powerful emerging military regional power that tested Israel through its proxy Hezbollah in 2006 and now it is testing the major western/ NATO powers in Syria. Iran, without any external military support and completely reliant upon indigenously developed military hardware and technology won the round in 2006 and now it seems to be gaining grounds in Syria since it has managed to hold off the western powers for nearly 4 years in the region whereas the other Arab spring countries had capitulated rather quickly. 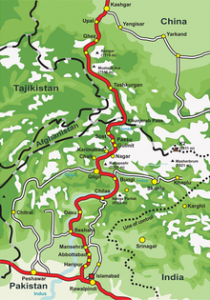 Pakistan is a military nuclear power in South East Asia that is fighting terrorism (supported by Saudi financial aid) within its borders and once it has managed to control it, Pakistan will make great economic and political strides with the help of China. China has gained a foothold in Gwadar through the Karakoram highway and the Indus Highway projects. Pakistan borders China, Iran, Afghanistan and Tajikistan while Iran borders Pakistan, Turkmenistan and Afghanistan. As such Pakistan and Iran are strategically important as barriers against any western threats towards Eurasian domination and also serve as connecting routes for China into the western warm waters of the Indian Ocean.

As a result of China’s economic and political influence, it is natural that a military alliance would transpire, one that was formed as the SCO in April 1996 with the signing of the Treaty on Deepening Military Trust in Border Regions. It is anticipated that the current observer countries Pakistan, Iran, India, Mongolia and eventually Afghanistan will be granted full member status in 2015. India has had long standing bilateral relations with Russia. It is in the interests of both China and Russia that India and Pakistan maintain cordial relations and an opportunity for that exists within the SCO.

In an article in the May 2007 Journal of International Affairs titled The Shanghai Cooperation Organization and Iran: A Power-Full Union Matthew Brummer wrote “the SCO is poised to emerge as an intergovernmental coalition to rival all others. Regional expert Professor David Wall puts it quite succinctly that it would be an OPEC with nuclear bombs”. Brummer further writes that it is important to recognize the sheer magnitude of the SCO in terms of its energy importance with the inclusion of Iran in the SCO. The SCO member states would occupy 60% of the Eurasian land mass, population of 3.5 billion and an energy (oil and gas) reserves and production base rivalling that of the Middle East. In terms of geographical importance, no other country within the SCO could’ve more strategic value for Russia and China than Iran and Pakistan with the former controlling the Strait of Hormuz and the latter the Indian Ocean (a passageway for Russia and China through the Commonwealth of Independent States and Afghanistan).

Much depends on the outcome of the P5+1 nuclear talk with Iran. A failure (touted as a bad deal in the US Congressional speech by Israel’s Netanyahu even while no any deal has been finalized with Iran) could lead to Iran breaking off from OPEC along with a disgruntled Venezuela (President Maduro had met with Russia’s Putin) due to Saudi reluctance to cut oil output and maintain their market share. That would leave the Saudis and their Arab partners toothless as powerbrokers. Within the OPEC, Iran and Venezuela oil reserves account for 38% of OPEC’s oil reserves of 1200 billion barrels. Saudi Arabia and its aristocratic, undemocratic and fundamentalist partners (excluding Iraq with 11%) account for 40% thus cutting OPEC into two halves. China would thus emerge a principal energy beneficiary. The Eurasian picture has changed since Mr. Brezenski published his vision of Eurasia in The Grand Chessboard and one that will likely change further in the coming half of the present decade which might lead to a clash of the titans from the East and the West.

Gulam Asgar Mitha is a retired Techinal Safety Engineer. He has worked with several N. American and International oil and gas companies. He has worked in Libya, Qatar, Pakistan, France, Yemen and UAE. Currently Gulam lives in Calgary, Canada and enjoys reading and keeping in tune with current global political issues.