After Latest Incident, Israel’s Future in FIFA Is Uncertain 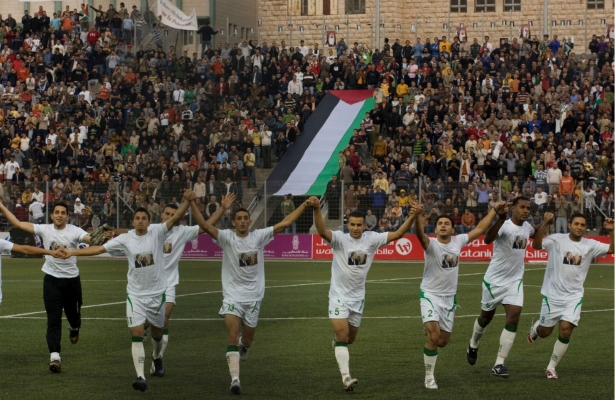 The Palestinian national soccer team, a source of pride for many, has been under attack by the Israeli state. (AP Photo/Tara Todras-Whitehill)

Their names are Jawhar Nasser Jawhar, 19, and Adam Abd al-Raouf Halabiya, 17. They were once soccer players in the West Bank. Now they are never going to play sports again. Jawhar and Adam were on their way home from a training session in the Faisal al-Husseini Stadium on January 31 when Israeli forces fired upon them as they approached a checkpoint. After being shot repeatedly, they were mauled by checkpoint dogs and then beaten. Ten bullets were put into Jawhar’s feet. Adam took one bullet in each foot. After being transferred from a hospital in Ramallah to King Hussein Medical Center in Amman, they received the news that soccer would no longer be a part of their futures. (Israel’s border patrol maintains that the two young men were about to throw a bomb.)

This is only the latest instance of the targeting of Palestinian soccer players by the Israeli army and security forces. Death, injury or imprisonment has been a reality for several members of the Palestinian national team over the last five years. Just imagine if members of Spain’s top-flight World Cup team had been jailed, shot or killed by another country and imagine the international media outrage that would ensue. Imagine if prospective youth players for Brazil were shot in the feet by the military of another nation. But, tragically, these events along the checkpoints have received little attention on the sports page or beyond.

Much has been written about the psychological effect this kind of targeting has on the occupied territories. Sports represent escape, joy and community, and the Palestinian national soccer team, for a people without a recognized nation, is a source of tremendous pride. To attack the players is to attack the hope that the national team will ever truly have a home.

Over the last year, in response to this systematic targeting of Palestinian soccer, al-Rajoub has attempted to assemble forces to give Israel the ultimate sanction and, as he said, “demand the expulsion of Israel from FIFA and the International Olympic Committee.” Al-Rajoub claims the support of Jordan, Qatar, Iran, Oman, Algiers and Tunisia in favor of this move, and promises more countries, with an opportunity at a regional March 14 meeting of Arab states, to organize more support. He has also pledged to make the resolution formal when all the member nations of FIFA meet in Brazil.

Qatar’s place in this, as host of the 2022 World Cup, deserves particular scrutiny. As the first Arab state to host the tournament, they are under fire for the hundreds of construction deaths of Nepalese workers occurring on their watch. As the volume on these concerns rises, Qatar needs all the support in FIFA that they can assemble. Whether they eventually see the path to that support as one that involves confronting or accommodating Israel, will be fascinating to see.

As for Sepp Blatter, he clearly recognizes that there is a problem in the treatment of Palestinian athletes by the Israeli state. Over the last year, he has sought to mediate this issue by convening a committee of Israeli and Palestinian authorities to see if they can come to some kind of agreement about easing the checkpoints and restrictions that keep Palestinian athletes from leaving (and trainers, consultants and coaches from entering) the West Bank and Gaza. Yet al-Rajoub sees no progress. As he said, “This is the way the Israelis are behaving and I see no sign that they have recharged their mental batteries. There is no change on the ground. We are a full FIFA member and have the same rights as all other members.”

The shooting into the feet of Jawhar and Adam has taken a delicate situation and made it an impossible one. Sporting institutions like FIFA and the IOC are always wary about drawing lines in the sand when it comes to the conduct of member nations. But the deliberate targeting of players is seen, even in the corridors of power, as impossible to ignore. As long as Israel subjects Palestinian athletes to detention and violence, their seat at the table of international sports will be never be short of precarious.

Dave Zirin, The Nation’s sports correspondent, is the author, most recently, of Game Over: How Politics Has Turned the Sports World Upside Down. Named one of UTNE Reader’s “50 Visionaries Who Are Changing Our World,” Zirin is a frequent guest on MSNBC, ESPN and Democracy Now! He also hosts his own weekly Sirius XM show, Edge of Sports Radio. His other books include What’s My Name Fool? (Haymarket Books), A People’s History of Sports in the United States (the New Press), Bad Sports: How Owners Are Ruining the Games We Love (Scribner) and, with John Wesley Carlos, The John Carlos Story. You can find all his work at www.edgeofsports.com.