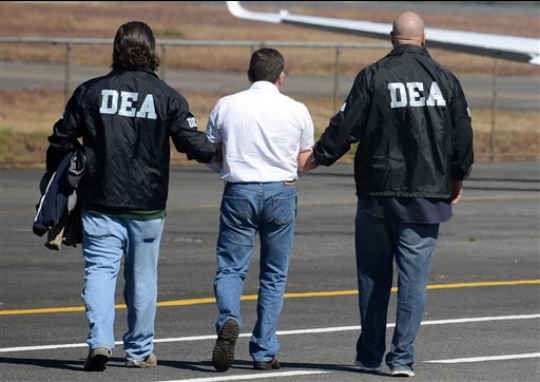 9 Apr 20125 – Secret mass surveillance conducted by the Drug Enforcement Administration is falling under renewed scrutiny after fresh revelations about the broad scope of the agency’s electronic spying.

On Tuesday, USA Today reported that for more than two decades, dating back to 1992, the DEA and the Justice Department “amassed logs of virtually all telephone calls from the USA to as many as 116 countries linked to drug trafficking.”

Citing anonymous current and former officials “involved with the operation,” USA Today reported that Americans’ calls were logged between the United States and targeted countries and regions including Canada, Mexico, and Central and South America.

The DEA’s data dragnet was apparently shut down by Attorney General Eric Holder in September 2013. But on Wednesday, following USA Today’s report, Human Rights Watch launched a lawsuit against the DEA over its bulk collection of phone records and is seeking a retrospective declaration that the surveillance was unlawful.

The latest revelations shine more light on the broad scope of the DEA’s involvement in mass surveillance programs, which can be traced back to a secret program named “Project Crisscross” in the early 1990s, as The Intercept previously revealed.

Documents from National Security Agency whistleblower Edward Snowden, published by The Intercept in August last year, showed that the DEA was involved in collecting and sharing billions of phone records alongside agencies such as the NSA, the CIA and the FBI.

The vast program reported on by USA Today shares some of the same hallmarks of Project Crisscross: it began in the early 1990s, was ostensibly aimed at gathering intelligence about drug trafficking, and targeted countries worldwide, with focus on Central and South America.

It is also reminiscent of the so-called Hemisphere Project, a DEA operation revealed in September 2013 by The New York Times, which dated as far back as 1987, and used subpoenas to collect vast amounts of international call records every day.

There is crossover, too, with a DEA database called DICE, revealed by Reuters in August 2013, which reportedly contains phone and Internet communication records gathered by the DEA through subpoenas and search warrants nationwide.

The precise relationship between Crisscross, DICE, Hemisphere and the surveillance program revealed by USA Today is unclear. Whether or not they were part of a single overarching operation, the phone records and other data collected by each were likely accessible to DEA agents through the same computer interfaces and search and analysis tools.

A Justice Department spokesman told Reuters Wednesday that “all of the information has been deleted” and that the DEA was “no longer collecting bulk telephony metadata from U.S. service providers.”

What the spokesman did not say is that the DEA has access to troves of phone records from multiple sources — and not all of them are obtained from U.S. service providers.

As The Intercept’s reporting on Project Crisscross revealed, the DEA has had large-scale access to data covertly collected by the NSA, CIA and other agencies for years.

According to NSA documents obtained by Snowden, the DEA can sift through billions of metadata records collected by other agencies about emails, phone calls, faxes, Internet chats and text messages using systems named ICREACH and CRISSCROSS/PROTON.

But ICREACH alone was designed to handle two to five billion new records every day — the majority of them not collected using any conventional search warrant or a subpoena.

Instead, most of the data accessible to the DEA through ICREACH is vacuumed up by the NSA using Executive Order 12333, a controversial Reagan-era presidential directive that underpins several NSA bulk surveillance operations that monitor communications overseas. The 12333 surveillance takes place with no court oversight and has received minimal Congressional scrutiny because it is targeted at foreign, not domestic, communication networks.

This means that some of the DEA’s access to mass surveillance data — records collected in bulk through subpoenas or warrants — may have been shut down by Holder in 2013. But it is likely that the agency still has the ability to tap into other huge data repositories, and questions remain about how that access is being used.