31 Mar 2015 – I am standing on sacred territory in Donbass, which also happened to be sacred territory during the former Soviet Union. On the top of this hill roughly halfway between Donetsk and Lugansk, there used to be an elaborate monument complex celebrating the heroes of World War II who defeated nazi-fascism.

Kiev’s self-described “anti-terrorist operations” (ATO) – which continue to demonize the whole population of Donbass – have turned this literally upside down. Last year, Kiev’s forces took Saur-mogila, and bombed the whole monument complex. The forces of the People’s Republics of Donetsk and Lugansk retook it, at great cost; and now a red-white-blue resistance flag dominates the landscape, waving in the wind. 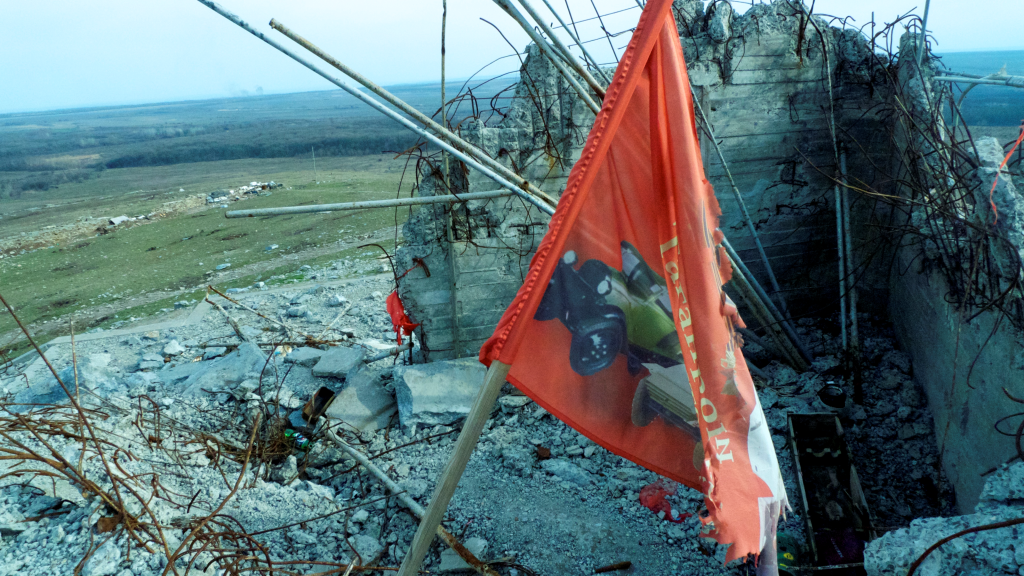 Top of the hill at Saur-mogila. © Sputnik/ Pepe Escobar

As I was climbing the hill I stumbled accidentally into the definitive, graphic image of the current civil war in Ukraine, the microcosm/proxy theatre of a do-or-die, Cold War 2.0 geopolitical confrontation between the US and Russia.

One of the statues in the monument, representing a World War II hero, is in fragments, but not destroyed; the torn torso is striving to rise up from the ground. Seventy years after the victory against nazi-fascism, the statue has almost been blown to bits by forces in Kiev aligned with, and infiltrated by, nazi-fascist elements. And Europe, refusing to look at what’s really happening in its eastern borderlands, is, once again, splendidly oblivious.

On the top of the hill, I could finally get a full geographical perspective of the battles of last summer. Facing northeast in the distance were the forces of fascist Right Sector leader Dmytro Yarosh. Russia is to the right.

The “cauldron” of Debaltsevo — actually three cauldrons where Kiev’s forces were encircled, squeezed and devastated by the resistance is slightly northwest, 40 kilometers away. Donetsk residents say there could have been at least 10,000 lethal casualties on Kiev’s side during the whole siege.

“Children Holed up in Basements”

Saur-mogila represents a great military victory for Donbass. But what matters most for average people is the humanitarian situation, which remains dire. The main trauma doctor at Donetsk’s general hospital assured me there has been no Red Cross or “international community” help whatsoever reaching the city.

After all, for all those corporate/manicured faces from Washington to Brussels, everyone in Donbass is a “terra-rist”, according to Kiev’s playbook imported straight from the neo-con controlled Dubya era.

The oh so civilized “West” – unwilling to learn anything from history – would rather listen to the spiders-in-a-bottle oligarch dance in Kiev, which in these Orwellian times sings a travesty of “democracy”.

Well, this is how the oligarch theoretically in charge (he’s not; the CIA and the State Department are), Petro Poroshenko, wants to treat the whole population of Donbass; “Our children will go to schools and kindergartens, while theirs will be holed up in basements!”

And this from the “leader” of a (failed) state which aspires to become a EU member; the EU, predictably, looks the other way.

So, also predictably, an overflow of “holed up in basements” is exactly what I saw in Donetsk — from veterans’ homes turned into refugee centers to Soviet-era bomb shelters complete with Soviet iconography painted on the walls. Whole families, the elderly, people afraid to come out even by daylight, and dozens of traumatized babies, children and teenagers. 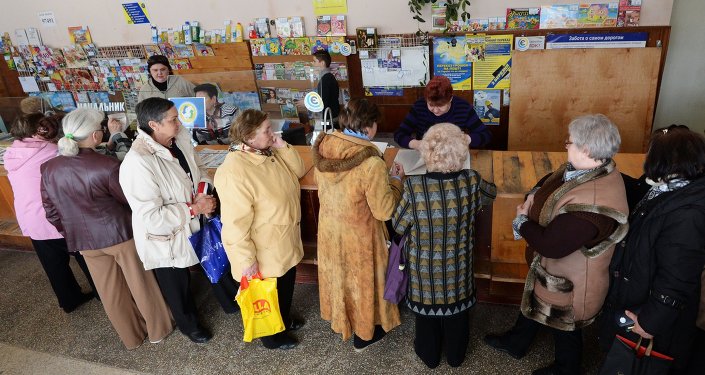 40% of Ukraine Population on Brink of Survival. © Sputnik/ Mikhail Voskresenskiy

According to Moscow-based Iskander Sultan, a coordinator of volunteer union groups, there may have been as many as 2 million refugees fleeing from Donbass over the past year; compare it to Pakistan in the early 2000s, when there were 4 million Afghan refugees fleeing the Taliban.

For those who have chosen to stay behind, especially among the elderly, at least the payment of pensions — frozen by Kiev — will be reinstated by the twin People’s Republics (their Parliament has 60 members, 30 from Donetsk and 30 from Lugansk, working in close cooperation.)

Seen from Donetsk, the plight of so many average working class or lower middle class families, which look just like your average family in Manchester, Lille, Bologna or Valencia, displaced by a proxy war which they never wanted, demonized in block as “terra-rists”, threatened by fascists with deportation, and completely ignored by the “civilized” West, is as mind-boggling as the cosmic arrogance/ignorance of the “civilized” narrative which sees Ukraine only as good guys/democrats in Kiev against bad guys/rebels remote-controlled by evil Russia.

The “civilized” bunch does not know it, because Western corporate media isn’t allowed to inform them. But in Donetsk, for instance, there is ample debate on what would be a possible future for Donbass. Some prefer a largely autonomous region within Ukraine (but then again, a minute later, they admit that after the Odessa massacre last May and this “junta” in Kiev treating them as terrorists, that will never happen). Some prefer an independent nation (although admitting the interests of the “West” would never allow it). And some prefer to become part of Russia (while admitting, a minute later, that would be a burden Moscow would rather not take.)

Meanwhile, the fight for mere survival is primordial. Primorka (“Land by the Sea”), bordering the Sea of Azov in Rostov Region, is one of the refugee camps for eastern Ukrainians on Russian territory, currently hosting 246 people, including 51 children attending school, and three newborn babies. Most are elderly, mainly from Donetsk, unable to find work but dreaming of going back. One of the families even managed to escape the Debaltsevo cauldron.

The site used to be a children summer camp, closed for a few years. It was reopened through the initiative of a private citizen, Alexander Dobrovolsky, who sold his apartment to finance the operation. At the start Primorka was housing over 1,300 refugees. Now it has finally obtained municipal and federal funds as well.

Among the stray dogs roaming the very clean and well-maintained camp, right by the sea, one is called Obama. Another one is “Yats”. There also used to be a dog called Poroshenko. It died two weeks ago.