Distributing guns and weapons training to students and school staffers is the wrong way to fight terrorism. 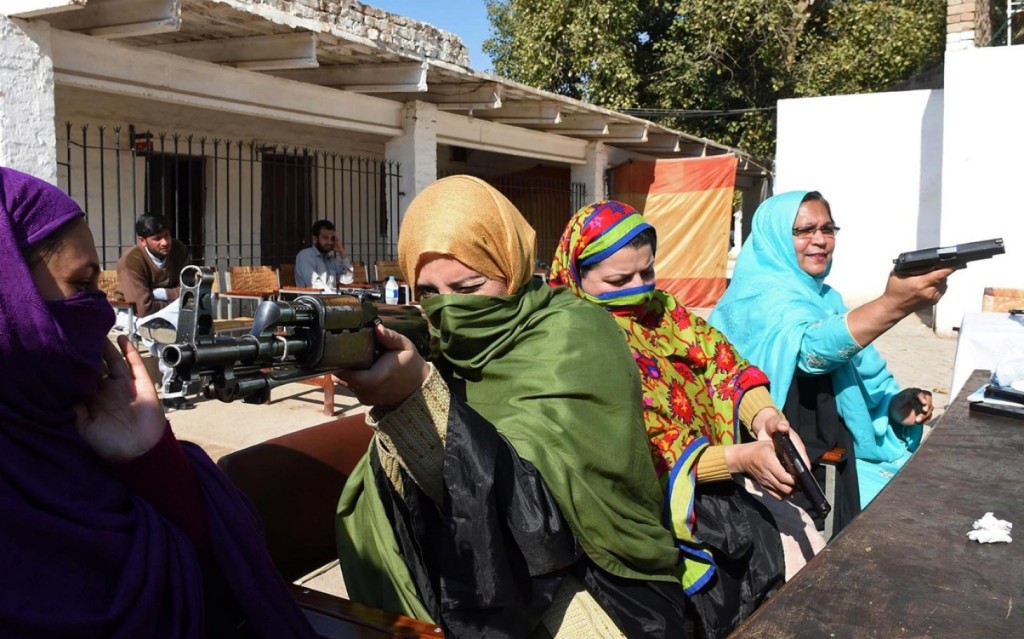 April 2, 2015 – This year students and teachers across Pakistan started studying an unusual new subject. In three of the country’s four provinces — Sindh, Punjab and Khyber Pakhtunkhwa — they were taught how to shoot firearms and defuse bombs. The ongoing training was accompanied by the announcement that permit laws have been relaxed to encourage teachers to carry weapons to schools.

Both directives are a reaction to the December massacre of 132 schoolchildren at Peshawar’s Army Public School by the Tehreek-e-Taliban Pakistan (TTP). The Peshawar attack was intended to avenge the lives taken by the Pakistan army during Zarb-e-Azab, the ongoing military operation in North Waziristan. Zarb-e-Azab was launched as revenge for the TTP’s June assault on Karachi’s Jinnah International Airport — which was, in turn, a reaction to the killings of TTP leaders such as Hakeemullah Mehsud.

This cycle of attack and reprisal is a reminder that the Pakistani state is engaged in a battle with the Pakistani Taliban while civilians continue to pay the price.

Instead of devising long-term sociopolitical policies to fight extremism at its roots, the government decided to rely on stopgap solutions. The transfer of responsibility from a weak state to the unqualified shoulders of students and teachers is only the latest example of this shortsighted approach.

It is true that long-term solutions require increasing short-term security. This is why schools across the country were shut down after the Peshawar attack. But the government failed to use this period to implement the concrete security policies that it should have put in place. Security experts should have come forth and overseen the installation of closed-circuit television cameras and panic buttons that could improve state security personnel’s response time to threats. The government should have begun recruiting and training security guards exclusively for the purpose of defending and monitoring schools. The impact of the Peshawar attack was such that if the relevant parties had attempted sincere cooperation, it would have been possible to obtain a sufficient budget to pay for these improvements.

Instead, when schools reopened after this extended break, their budgets were so constrained that, as one provincial minister admitted, the construction of boundary walls for thousands of schools could be paid for only by diverting $15 million that had been earmarked for school sanitary facilities and drinking water.

Mushtaq Ahmed Ghani, the interior and higher education minister for Khyber Pakhtunkhwa, claims that the new directives could eliminate further attacks on schools because the Taliban would not want to face armed teachers. Unfortunately, he is talking about the same Taliban who have been brazen enough to attack the Pakistan army headquarters, Pakistan’s naval base and heavily barricaded prisons. It is ludicrous to think that these hardened militants will be scared off by inexperienced teachers who can hardly handle the weight — much less the recoil — of a gun.

Ghani also claims that the training will be particularly effective during the approximately 10 minutes it takes security agencies to arrive at a school under attack. Schools in Pakistan have been under siege for the better part of a decade; in Khyber Pakhtunkhwa alone, at least 750 schools have been attacked by militants since 2008. Although not all attacks have the same motivations as the Peshawar massacre, the government has still had ample time to create policy measures to protect educational institutions. Requiring teachers to hold the front for 10 minutes while awaiting security forces reveals the government’s utter failure to develop effective policies.

For years now, schools and colleges that can afford it have been making their boundary walls higher and covering them with barbed wire. The richest schools even hire snipers on occasions when the security situation seems more volatile than usual. It is hardly ideal to educate young minds inside schools that resemble forts, but it is far more unsettling to expect children to concentrate on algebra while fully aware that their teacher has a loaded gun — and that their classmates or perhaps they themselves, have the ability to use that gun.

Perhaps the most unnerving part of this story is the reaction that the new directives have received. Although a sample of 1,371 people is hardly representative of Pakistan, the results of a poll carried out by the English-language newspaper Dawn are suggestive. When it asked readers of its website if providing security training to students was a good idea, 64 percent said yes.

It is only fitting, then, that Herald magazine’s most recent person of the year, by popular vote, is Aitzaz Hasan — a schoolboy from Hangu who died tackling a suicide bomber to save the lives of scores of other students. Hasan was a hero who acted on instinct, and his bravery should be applauded. But we cannot ask more Pakistani students to live up to this individual act of courage. Parents should be sending children to school to learn, not to enter the battle against terrorism.

For further arguments against the government’s pro-gun policies, take the case of Niaz Muhammad, a school security guard in Mansehra who accidently shot and injured four 10-year-old girls while they were entering school, or Salim Masih, a low-ranking office worker who was handed a submachine gun to unwillingly protect a school in Peshawar after merely a day of training.

Handing out guns to undertrained school staffers and students is not an antidote to the Taliban. On the contrary, it will set Pakistan’s battle against extremism many steps back. The stakes are high: Years ago, a similarly careless distribution of weapons played a critical part in creating the militants Pakistan is battling today. Until the government starts to fight the roots of militancy instead of its symptoms, the current cycle of violence is likely to continue.

Maham Javaid is completing a graduate degree in Near Eastern studies at New York University. She was an editor at Herald, a Karachi-based news magazine, and has reported on Pakistan for Al Jazeera English.