Mediterranean Migrant Crisis: ‘EU and US Have to Own Up to What They Have Done in Libya’

The West should recognize that the situation with African migrants trying to escape to Europe is a serious crisis which needs to be addressed on an international level, Abayomi Azikiwe, editor, Pan-African News Wire, said. 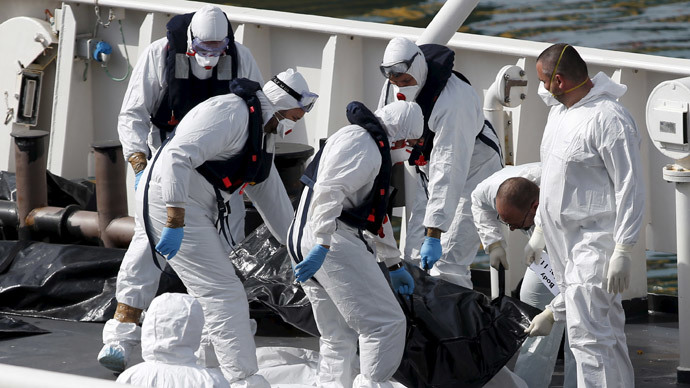 RT: The EU foreign policy chief Federica Mogherini is pointing the finger at the situation in Libya for the migrant crisis. Do you agree with her?

Abayomi Azikiwe: Well, you have to go back and see why there is a crisis in Libya itself. Four years ago, led by the Pentagon and NATO they embarked upon a campaign of destabilization and a war of regime change in Libya. It resulted in the deaths of 50,000 to 100,000 people, some 26,000 bombing missions, nearly 10,000 bombs were dropped on the country, and consequently 2 million people were displaced. Since 2011 the situation in Libya has not improved at all. In many cases it has worsened because there is no central government or authority since the overthrow of the Jamahiriya under Colonel Muammar Gaddafi. So consequently those are Africans and other migrants who were in Libya seeking to get out, and the conditions are worsening due to the fact that this year, we are talking about four and a half months, we’ve seen more deaths than we’ve ever seen in modern history in the Mediterranean. So something has to be done. The Prime Minister of Italy Matteo Renzi equated the current crisis with the…slave trade which ended during the 19th century.

RT: The Italians are now voicing their concern over the flood of migrants. However, years ago they called for the bombing of Libya. For instance Pier Luigi Bersani, the then-leader of the Democratic Party did so. Do you think he would have been of the same opinion if he had known what he does know now?

AA: Hopefully he would have had a different opinion but that was four years ago and Italy is the former colonial power in Libya. They maintained the control over the North African state for decades. In fact, the war of liberation which was fought there between 1911 and the early 1930s resulted in the deaths of nearly a third of the population during the first half of the 20th century. So this is something that directly falls at the feet of the EU, and what is happening is that the culpability for this is being shared by other European powers. They are leaving it to the countries of Southern Europe which have fewer resources than for example Germany or France or Great Britain which in fact had a larger role in the destabilization and the overthrow of the Gaddafi government in Libya during 2011. So they have to recognize this is a serious crisis.

RT: What should they do to take the responsibility now?

AA: They need to make an attempt to re-correct the destabilization and the dislocation of millions of people throughout North and West Africa. This is also troubled by the fact that within Europe itself there is a huge debate over whether or not these migrants should be allowed to come in such large numbers. The island where there is a reception center, Lampedusa, in fact is overwhelmed. They only have 6,000 occupants of the island. And there is a big debate going on there whether or not people should be turned away and not be given reception in this island.

RT: The EU Commissioner has already offered a solution to the problem of migration. What do you make of this suggestion to ‘sink boats’?

AA: I don’t think that’s a viable solution. The boats are already sinking. We had 900 people who died [on Sunday] as a result of these rickety and unstable vessels that are being utilized. Many of the people were locked in these vessels and were not able to move around or to adequately seat… So I think it’s a solution that is really not practical. This is a much broader international crisis that the US and NATO should address seriously at an international summit. The EU has a summit on Thursday in Luxembourg to address this issue. But they have to own up to what they have done in regard to the situation in Libya and to other states in the Northern Africa.

EU under fire over migrant crisis after deadly boat capsize

‘Europe must rise up, do what’s right’ for Mediterranean migrants – Britain’s top clergyman