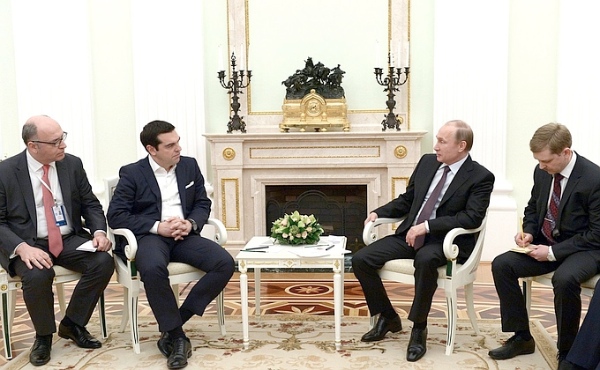 “We agree to pay more attention to investments, we discussed cooperation in energy sector. We discussed possibility to supply Russian gas to Greece via Turkish Stream,” Putin said on Wednesday.

“The new route will provide for the Europeans’ needs in fuel, and would allow Greece to become one of the main power distribution centers on the continent, could help attract significant investments into the Greek economy,” Putin added.

Tsipras said that Athens was interested in attracting investments for construction of the pipeline on the Greek territory from the Turkish border.

Greek-Russia bilateral trade more than doubled over 2009–2013 but fell by 40 per cent in 2014. Greece-EU bailout talks are still in a deadlock as Athens struggles to revive the economy that is facing billions of euros in debt and interest payments.

Meanwhile, the Greek Prime Minister in Moscow said European leaders must respect the sovereignty of Greece and its right to improve ties with countries like Russia.

“We have spring in Russian-Greek relations,” Tsipras said. “Greece is a sovereign state and will use its geopolitical role as European country. We will use all opportunities to boost cooperation with Russia.”

Putin said Russia is not “forcing anyone into anything” but noted that “just because Greece is debt-ridden, does it mean that it cannot have an independent foreign policy?”

Greek Premier Tsipras on Wednesday, however, said Greece “openly disapproves” of European anti-Russian sanctions, because the EU economic war against Russia could lead to a new Cold War.

“We do not entirely share the EU stance on economic sanctions against Russia. We will promote new solution based on dialogue,” said Tsipras in Moscow.