Pillar of Neoliberal Thinking Is Vacillating 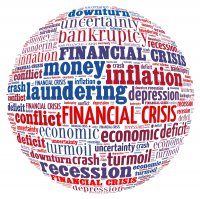 23 April 2015 – This month’s World Economic Outlook released by the International Monetary Fund (IMF) only confirms that consequences of the collapse of the financial system, which started six years ago, are serious. And they are accentuated by the aging of the population, not only in Europe but also in Asia, the slowing of productivity and weak private investment.

Average growth before the financial crisis in 2008 was around 2.4 percent. It fell to 1.3 percent between 2008 and 2014 and now the estimates are that it will stabilise at 1.6 percent until 2020, in what economists call the “new normal”. In other words, “normality” is now unemployment, anaemic growth and, obviously, a difficult political climate.

For the emerging countries, the overall picture does not look much better. It is expected that potential growth is expected to decline further, from an average of about 6.5 percent between 2008 and 2014 to 5.2 percent during the period 2015-2020.

The case of China is the best example. Growth is expected to fall from an average 8.3 percent in the last 10 years to somewhere around 6.8 percent. The result is that the Chinese contraction has worsened the balance of exports of raw materials everywhere.

The crisis is especially strong in Latin America, and in Brazil the fall in exports has contributed to worsening the country’s serious crisis and increasing the unpopularity of President Dilma Rousseff, already high because of economic mismanagement and the Petrobras scandal.

This, by the way, opens up a reflection which is fundamental. From Marx to Keynes, redistribution theories were all basically built on stable or expanding economies.

Progressive parties were able to build their success during economic expansion but the Left has not developed much economic science on what to do in period of crisis. What it tends to do is mimic the receipts and proposals from the Right and, when the crisis is over, it has lost its identity and has declined in the eyes of the electorate.

From this perspective, the situation in Europe is exemplary. All those right-wing xenophobic parties which have sprouted up – even in countries long held to be models of democracy such as the Nordic countries – have developed since 2008, the beginning of the financial crisis. In the same period of time, all progressive parties have lost weight and credibility. And now that the IMF sees some improvement in the European economy, it is not the traditional progressive parties that are the beneficiaries.

The term that the IMF gives to the current economic moment is “new mediocrity” – which is a franker way of saying “new normal” – and it observes that in the coming five years, we will face serious problems for public policies like fiscal sustainability and job creation.

In fact, every day, the macroeconomic figures, which have become the best way to hide social realities, are becoming less and less realistic if we go back to microeconomics as we have done during the last 50 years.

The best example is the United Kingdom, which is the champion of liberalism. Each year it has cut public spending and now claims to have growth in employment, with 600,000 new jobs in the last year. The only problem is that if you look into the structure of those jobs, you will find that the large majority are part-time or underpaid, and employment in the public sector is at its lowest since 1999.

A clear indicator is the number of people who visit the food banks created to meet the needs of the indigent. In the world’s sixth largest economy, their numbers have grown from 20,000 before the crisis seven years ago to over one million last year. And the same has happened all over Europe, albeit to a lesser extent in the Nordic countries.

U.K. economists have published studies on how austerity has affected growth. According to the Office for Budgetary Responsibility, established by the U.K. government, austerity blocked economic growth by one percent between 2011 and 2012. But, according to Simon Wren-Lewis of Oxford University, the figure is actually about five percent (or 100 billion pounds).

In other words, fiscal austerity reduces growth, and this creates large deficits which call for more fiscal austerity. It is a trap that Nobel laureate Keynesian economists Joseph Stiglitz and Paul Krugman have described in detail to no avail. We are all following the “liberal order” of Germany, which think its reality should be the norm and that deviations should be punished.

Now, while we can all agree that much of this is obvious to the average citizen in terms of its impact on everyday life, what is important and new is that the IMF, the fiscal guardian which has imposed the Washington Consensus (basically a formula of austerity plus free market at any cost) all over the Third World with tragic results, has woken up to reality.

Don’t get me wrong – I’m not implying that the IMF is becoming a progressive organisation, but there are signs that an important pillar of neoliberal thinking is vacillating.

Of course, those responsible for the global crisis – bankers – have come out with impunity. The world has exacted over three trillion dollars from its citizens to put banks back on their feet. The over 140 billion dollars in fines that banks have paid since the beginning of the crisis is the quantitative measure of illegal and criminal activities.

The United Nations calculates that the financial crisis has created at least 200 million new poor, several hundred millions of unemployed, and many more precarious jobs, especially for young people. And, yet, nobody has paid, while prisons are full of people who are there for minor theft, the social impact of which is infinitesimal by comparison.

In 2014, James Morgan, the boss of Morgan Stanley, cashed in 22.5 million dollars, Lloyd Blanfein, the boss of Goldman Sachs, 24 million, James Dimon, the boss of J.P. Morgan, 20 million. The most exploited of all, Brian Moynihan of the Bank of America, a paltry 13 million. Nobody stops the growth of bankers.

Roberto Savio is the founder and president emeritus of Inter Press Service-IPS, publisher of Other News, and a member of the World Social Forum International Committee.