Power and Resistance at the World Social Forum in Tunisia 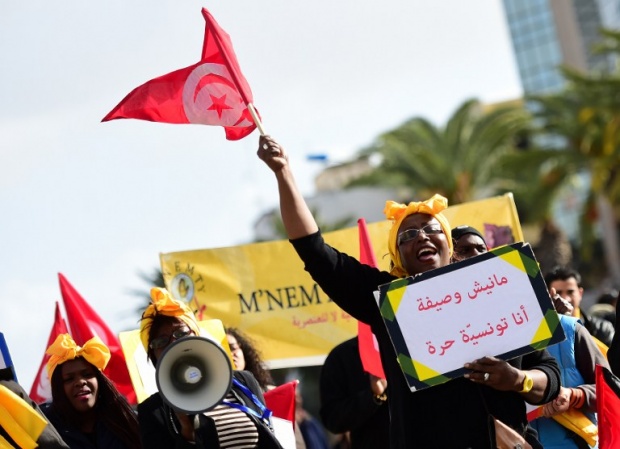 Photo: A woman holds a placard shouting slogans during a march at the end of the 2015 World Social Forum (WSF) in Tunis on March 28, 2015. AFP

Despite the stormy weather and the tragic attacks that targeted foreigners at the Bardo Museum in Tunis the previous week, the World Social Forum (WSF), held between 24 and 28 March [2015], succeeded in gathering around 50,000 people from 125 countries representing all continents.

That the anti-globalisation forum was vibrant, youthful and dynamic was a testimony to the still-burning flame of hope for a better world. This is the second time the forum has been held in Tunisia, illustrating its significance in the struggle for a just world more than four years after mass mobilisation across the country inspired uprisings across the region and further abroad.

The WSF is one of the few remaining places where tens of thousands of people from all over the world meet annually to discuss, debate, plan and organise under the banner of “Another World Is Possible”. Though participants may differ on the means to get there, a general consensus prevails on the ends, which include a world freed from injustice, oppression, authoritarianism, imperialism and the domination of a tiny minority that dictate its rule over the majority. More than a thousand workshops and activities were organised around a range of pressing issues, including corporate takeover of democracy, environmental and climate crises, racism and Islamophobia, women’s rights, migration and neo-colonialism.

NGO-isation and power politics creep in

Though the WSF continues to provide a space in which radical thinking, networking and organising can and does take place, it is not immune from power politics and attempts to neutralise, hijack and convert it to a status-quo agenda.

Valid and legitimate criticism has been directed at the insidious “NGO-isation” of resistance, in a way a symptom of the neoliberal state abdicating its traditional role to NGOs. Most of the latter operate in the neoliberal framework of “development” and “aid” and get their funding from many of the same Western governments, international financial institutions and multinational corporations that are at the heart of the power structures that the WSF was designed to counter.

In most cases, these NGOs end up addressing only some of the symptoms of injustice and oppression rather than looking at their structural causes. In doing so, they may contribute to the perpetuation of the system that generates poverty and suffering in the first place.

This phenomenon of NGO-isation has been analysed and addressed in several platforms but it is not the focus of this article, which will try to address two important points: a) how some dominant narratives that keep peoples from imagining and achieving “another world” creep and find their way into alternative forums that are supposed to challenge and deconstruct such narratives and not take them at face value, and b) how authoritarian governments in the region make their presence felt by sending big delegations representing their civil societies to pursue their propaganda and stifle dissent.

The opening WSF march and the ‘War on Terror’

In its communiqué regarding the tragic events at Tunisia’s Bardo National Museum, the organising committee announced that the opening WSF march would come under the banner of “Peoples of the world united against terrorism.” This clumsy and ambiguous slogan ends up – intentionally or not – aligning itself with the discourse of the “War on Terror,” an endless war that has caused untold suffering and created more violence and instability in the world.

The global war on terror has been used to justify interventionism and maintain Western hegemony, which enforces the brutal neoliberal global order, the plunder of natural resources and support for repressive regimes.

That the WSF preparatory committee adopted this language is unfortunate, but we need to bear in mind the local Tunisian context that facilitated such a decision. It is a context where key elements of the political elite – including partly re-incorporated sections of the old regime – have benefited from a so-called polarisation between “secularists” and “Islamists,” in which terrorism is often equated with the latter. Such battles have impacted the psyche of large sections of Tunisian society.

Former dictator Ben Ali’s “politics of fear” and “instrumentalisation” of “national security” for political purposes have ongoing ramifications for Tunisia’s contemporary political context. Not only have they often diverted attention from the socio-economic concerns expressed in the uprising, but they also have limited debates around alternative “conceptualisations of the state and state-society relations”.

In recognition of the past and present forms of the use of “security” discourses by various domestic and global power structures, several organisations and individual activists came together to critically reflect upon and challenge the WSF communiqué.

They called for a new slogan, more aligned with the mission and objectives of the WSF: “People of the world, united for freedom, equality, social justice and peace. In solidarity with the Tunisian people and with all victims of terrorism, against all forms of oppression.”

In a communiqué sent to the WSF organising committee, the signatory organisations stated that “The global justice movement cannot allow itself to be used for domestic and geopolitical agendas designed to manipulate public emotions and justify the further militarisation of societies in a way that ultimately benefits the security/military-industrial-complex.”

In an effort to follow up some of the discussions raised by the communiqué, several workshops specifically addressed this issue: the “Religion and Emancipation Convergence Meeting,” “Neocolonial Militarism and State Violence,” and “From Ferguson to Palestine: We Can’t Breathe.”

The purpose here is not to underestimate the very real effects of political violence, whether it occurs in Tunisia or elsewhere in the world, and regardless, as the statement puts it “of the perpetrator, whether state or non-state actors”. Rather it is to point to the ways the “War on Terror” has been used to shift the attention away from the way capitalist and imperial power works, as well as from the dire socio-economic and repressive political conditions that led to the uprisings in the first place.

The latest declaration by the octogenarian Tunisian President Béji Caid Essebsi that Tunisia will be a major non-member ally of NATO seems to confirm the concerns of the statement supporters that the “War on Terror” agenda ultimately contributes to a further militarisation of the region in a way that benefits the burgeoning “security-military-industrial complex”. Furthermore, the organisation of the “We are all Bardo” march on the 29 March, reminiscent of the “republican” march that was organised in Paris following the Charlie Hebdo massacre, is a reminder of how “national security” continues to be instrumentalised for domestic and geopolitical purposes.

It is not new or surprising that many of the region’s authoritarian regimes would send representatives from their loyal civil societies to the WSF to confuse, co-opt and disrupt truly independent and grassroots civil societies. Most notably, the 2013 WSF witnessed clashes between the pro and anti-Bashar al-Assad crowds. Sadly, there were several similar clashes between Syrian participants at the WSF this year.

In one, a group of pro-Assad baltaguia (state-linked thugs) attempted to violently disturb a meeting organised by the Global Campaign of Solidarity with the Syrian Revolution. Similar incidents occurred between some Algerian and Moroccan participants around the Western Sahara issue, which led the WSF organising committee to react in a press conference during the forum.

Even more striking this year is the significant presence of Algerian delegates, which reached around 1,500 people from 650 associations, the overwhelming majority of whom were not involved in organising any activity or workshop. This appears to mark a radical departure from the Algerian regime’s approach towards the WSF in 2013 when it barred 96 Algerian civil society activists from travelling to Tunisia, without giving any reason. According to several Algerian WSF participants, the government authorities adopted a different strategy this year.

Perhaps borrowing a page from the rulebook of their Syrian counterparts, it appears that the Algerian government this year decided to flood the event with its numerous clients and baltaguia. For example, there was one event organised in support of the exploitation of shale gas, clearly aimed at undermining a growing grassroots movement in opposition to the damaging environmental and social-economic effects of such procedures.

According to a petition signed by several well-known and respected Algerian civil society organisations, the Algerian state’s delegation were tasked with disturbing genuine meetings, intimidating dissidents and opposition activists, as well as creating chaos. Authoritarian regimes and their acolytes have no role to play in forums such as the WSF which aim to imagine, deliberate and create “another world”. It is incumbent upon activists who still believe in the radical potential of the WSF to question how this state of affairs was allowed to develop, and how such attempts to hijack the WSF can be halted in the future

Progressives all over the world consider the WSF as an alternative space whose raison d’être is to speak truth to power. Let’s not allow dominant narratives of state, capitalist and imperialist power as well as authoritarian regimes’ manoeuvres to derail us from this noble objective.