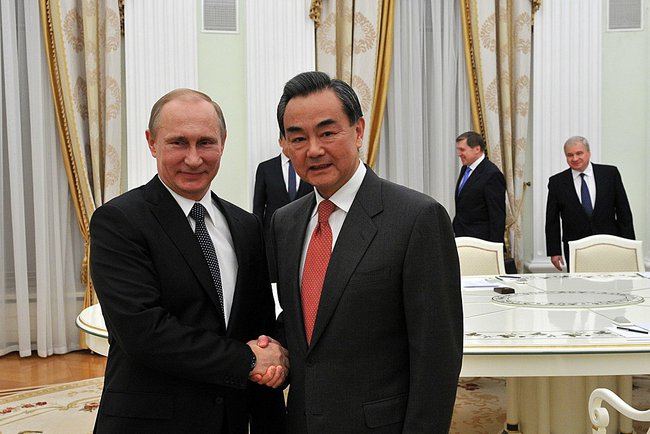 8 Apr 2015 – In a meeting with visiting Chinese Foreign Minister Wang Yi, Russian President Vladimir Putin has said Sino-Russian ties “meet the demands of the day” and Moscow will put its weight behind the Chinese Silk Road project.

“I believe there is no need to describe Russian-Chinese relations. They are truly at an unprecedentedly high level. Their quality meets the demands of the day and our national interests,” Putin said.

Chinese Foreign Minister Wang Yi is in Moscow to hold talks with Russian officials about preparations for the Chinese President’s Russia visit in May.

“I am certain that you discussed many foreign policy issues with your Russian colleague today,” Putin told Wang.

Wang and his Russian counterpart Sergey Lavrov had earlier held talks on the Yemen crisis and the situation in the middle-east.

Russia has announced last week that it will join the China-led Asian Infrastructure Investment Bank as a founding member.

The new supply line comes in addition to the “eastern” route, through the “Power of Siberia” pipeline, which will annually deliver 38 bcm of gas to China. Work on that pipeline route has already begun after a $400 billion deal was clinched in May.

Chinese President Xi Jinping will reach Moscow on May 8 for the celebrations to mark the 70th anniversary of Russia’s defeat of Nazi Germany and 70 years since the end of World War II.

Heads of 26 countries have confirmed their attendance at the May 9 celebrations in Moscow.

Putin and Xi have both, in recent months, warned against “distorting history”.

Chinese President Xi Jinping said at a war commemoration event in December that “forgetting history means betrayal and denying the crime means committing it once again.”

Last month, Putin ordered the organizing committee, established for the 70th anniversary celebration of the victory of the Anti-Fascist War on May 9 in Moscow, to effectively counter worrying attempts to “rewrite history”.

“This is a very important work to involve the young people in preserving historical memory about the events of the Great Patriotic War, about the key role of the Soviet Union in the victory over Nazism,” a Kremlin statement quoted Putin.