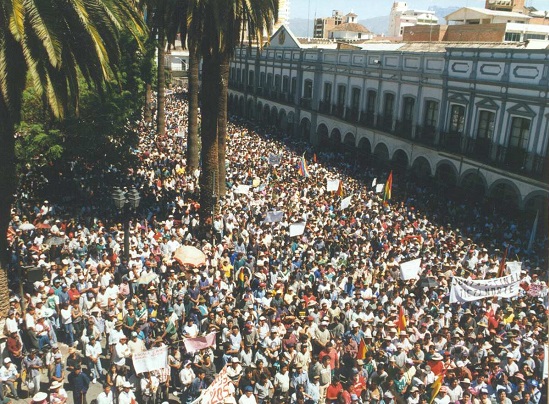 27 Apr 2015 – Fifteen years ago this month the people of Cochabamba, Bolivia were victorious in their now-famous showdown with one of the most powerful multinational corporations in the world, in what has come to be known as the Cochabamba Water Revolt. The attempt by the US Engineering giant Bechtel to privatize the city’s water supply backfired spectacularly when the people of Cochabamba faced down government forces to kick the multinational out of the country and to reclaim their rights to one of the most basic human necessities on the planet.

For people the world over, this stunning popular victory over corporate hubris in the Andes not only continues to inspire hope that another world is indeed possible; it also shines an urgent light on three fundamentals in the ongoing wider battle against the abuses of corporate power in South America: how the road is paved to allow foreign corporations to seize control of the continent’s forests, waters and territories; the damages they inflict when they get there; and how communities are fighting back against a deepening transnational assault on their resources and on their sovereignty.

For Bechtel, the road into Bolivia and its water systems was paved by Washington Consensus-inspired loan conditionalities. In the late 1990s the World Bank told Bolivia to privatize Cochabamba’s Water as a condition of further lending for water expansion. In 1999, the Bolivian government agreed and signed a lavish forty-year lease with a mysterious Bechtel subsidiary that wasted no time in hiking up the cost of water. Rates rose by 50% and sometimes by as much as double. The result for ordinary Cochabambinos was devastating, with many families being forced to choose between such basics as water or food. People from across the department responded with unified indignation, three times shutting down the entire city with blockades, marches, and general strikes. Despite heavy state repression that left one teenage boy dead and hundreds more injured, the people succeeded in kicking Bechtel out of the country, reclaiming their water supply and achieving a powerful victory that still resonates globally today.

Fast forward to South America 2015. These same fundamental themes of foreign corporate dominance and resistance are echoed across three current cases involving powerful European multinationals, profiled in a recent report, Corporate Conquistadors, from the Democracy Center, Corporate Europe Observatory and Transnational Institute. In Peru, Spanish Repsol is threatening not only the sovereignty but the very existence of local indigenous communities, as it pushes ever deeper into fragile Amazonian ecosystems in the insatiable quest to expand its reserves of oil and gas. To the south of Peru, in the region of Espinar, Swiss Commodities and Mining conglomerate Glencore Xstrata is bulldozing over human rights as local community members share testimonies of  already scarce water supplies being destroyed by its twin mega mining projects, Tintaya and Antapaccay. Finally, Italo-Spanish energy giant Enel-Endesa is set to flood some 8,500 hectares of vitally important agricultural lands in Huila, Colombia where it is constructing a 400MW dam to generate cheap energy – either for export or to set in motion a new wave of mega mining and unconventional gas operations.

Fifteen years after Bolivia’s water revolt, the leveraging power of loan conditionalities has given way to a popular myth among conservative governments in the region that securing Foreign Direct Investment (FDI) is the cornerstone of economic development, regardless of the cost. Just as powers from the Global North are in a frantic scramble to control natural resources, national governments across Latin America are competing to woo investors. Combined with this corporate resource grab is a deeper ideological and political assault that allows multinationals to consolidate ever greater powers over governments already weakened by decades of neoliberal policy prescriptions. In Peru, these dynamics are clear to see: both Repsol and Glencore Xstrata have been directly implicated in an intense industry-led push for widespread deregulation of crucial environmental protections in favour of unfettered extractivism – demands that were dutifully taken up by policymakers in 2014’s highly controversial “paquetazo” of reforms. Meanwhile in Colombia, Enel-Endesa was able to use the government’s much vaunted promise to uphold “investor confidence” as a weapon against it, pressuring on three separate occasions for weaker commitments to affected communities, in a licence process that already reeks of corporate impunity.

Over and over again, the premise that giving away natural resources is a doorway to a better life has proven devastatingly false. In Peru, indigenous peoples who have inhabited the Amazon for more generations than are countable are seeing their traditional ways of life being decimated in just a few short decades as rapid industrialisation and a series of toxic spills have impacted on their ability to hunt and fish. In the copper and iron rich region of Espinar, community members at the COP20 People’s Summit in Lima told us how they are  being left destitute after heavy metals being leached into the water from Glencore Xstrata’s mining operations are wiping out herds of livestock. This desolate story is repeated in Huila, where people  who fought for their land rights during the peasant uprisings of the 1970s are now being violently evicted to clear space for Enel-Endesa’s megadam project. Like Bechtel fifteen years earlier, both Glencore Xstrata and Enel-Endesa have benefited from the repressive use of state forces against civilians in asserting their government-assisted “rights” over precious raw materials.

And again, as in Cochabamba, ordinary people are undertaking extraordinary actions to reject a model of “development” imposed by foreign investors in connivance with national governments. In Huila, the Association of Peoples Affected by the Quimbo Dam (ASOQUIMBO), in their effort to  shut down Enel-Endesa’s operations, has been engaging in strike actions, occupations and resistance to evictions that have succeeded in delaying the project by over a year, pushing it far over budget. Strike action has also been brought to bear on Glencore Xstrata’s mining operations in Espinar. In May 2012 the “United Front in Defence of Espinar’s Interests” (FUDIE) was met with police violence that claimed the lives of two civilians. Undeterred, many of those living under the shadows of the Tintaya and Antapaccay mines, including the region’s former mayor, are continuing to challenge Glencore Xstrata despite being pressed with heavy criminal charges and facing decades in prison. As in Espinar, there have been calls of foul play from the Awajún community in the Amazon where Repsol has been accused of infiltrating movements in a bid to divide and weaken any resistance.

There is one facet in all this that is markedly different than in Cochabamba fifteen years ago: the accelerating climate crisis and the ways in which these new cases exacerbate its impacts. Repsol’s relentless bingeing on fossil fuels is taking it to increasingly fragile frontiers in oil and gas exploration, setting in motion a slow industrial genocide for indigenous peoples living in the Peruvian Amazon. Glencore Xstrata is pushing communities in Espinar into greater climate vulnerability with its industrial appetite for water resources already stressed by climate-induced glacial melt. Enel-Endesa’s rainforest-destroying, methane-belching hydroelectric dam, El Quimbo, is set to kickstart Colombia’s own climate-wrecking fracking industry. Although wrapped in carefully crafted greenwash and invoking the myth of Corporate Social Responsibility, each of these multinationals are emblematic of how corporate activities are not only eroding social justice on the ground in South America but are also simultaneously driving climate change, with devastating consequences the world over.

In the aftermath of Cochabamba Revolt, Bechtel fought back with a US$50 million legal assault against Bolivia in a World Bank trade court (seeking not only return of its tiny investment but ‘lost future profits’).  Bechtel lost the legal battle as well, the result of a global citizen effort that joined people across continents in collective action. Today’s local resistance movements in Peru and Colombia also need international solidarity. To match a globalized neoliberalism, one local activist resisting the Quimbo dam pointed to “a globalization of solidarity”, connecting people across borders to confront a transnational enemy. The ever-louder rumblings and outbursts of a climate in crisis serve as a stark reminder that this kind of international activism, built on links of genuine solidarity, is not only strategic – but vital. As the students, factory workers and farmers holding blockades fifteen years ago would have said, Jallalla Cochabamba!

Philippa DeBossier works with the Democracy Center in Cochabamba, Bolivia and is a co-author of the report, Corporate Conquistadors.