Proposal to put all natural resources in the forest under state control faces legal wrangles – but if passed could enshrine environmental protection.

10 May 2015 – The Brazilian rainforest could be effectively nationalised under a draft bill being considered by the country’s MPs.

The proposed legislation would recognise the sovereignty of Brazil over the Amazon’s natural resources and set up a national Amazonian policy council with the aim of enshrining environmental protection and regulating economic activities in the rainforest.

Should the law be passed, companies wanting to operate in the area would require approval from the new state entity in return for shares of the proceeds – in a similar way to that which oil exploration concessions are granted through state-controlled company Petrobras in return for royalties. 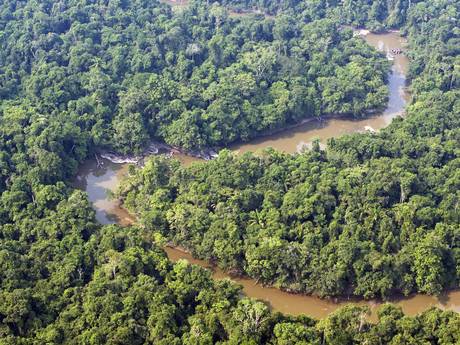 The Jamanxim river in the National Forest reserve (AFP/Getty)

The draft bill was put forward by Sergio Zveiter, a Social Democratic MP in Rio de Janeiro, and will go before a special commission created at the end of March.

Mr Zveiter said the on-going destruction of the Brazilian rainforest was “unacceptable” and called for the protection of Brazil’s interests in the Amazon.

“International leaders have repeatedly insisted that the Amazon is not a national territory, it’s a transnational territory. [This] puts in doubt Brazilian sovereignty over the territory,” Mr Zveiter argued when proposing the bill.

The draft was originally drawn up in 2013 and was shelved at the end of January this year after the legislative term came to an end in 2014.

Mr Zveiter requested the bill was revisited in February and a special commission of 26 members was established to examine the law.

The bill succinctly states: “The Federal Government owns all of the natural resources of the Amazon, therein including mines, the forest and watersheds.”

It also set out that the state would have a monopoly over the exploration and mining of any mineral, vegetal, animal or water resource, and the import and export of any resulting products. Under the bill, a national Amazonian policy council would have the responsibility for ensuring the extraction of mineral and vegetal resources was sustainable, and promoting the sustainable exploration of the forest.

But Amazonian politicians have criticised the bill for creating yet more bureaucracy in the protection of the rainforest. Campaigners have also warned that the bill is being considered without consulting indigenous communities.

“This proposed bill ignores the international commitments made by Brazil to guarantee the rights to participation of indigenous populations in the decision-making process related to the exploitation of the natural resources on the areas they traditionally occupy,” said Maira Irigaray, Brazil co-ordinator for Amazon Watch.

“In this sense, this bill is another attempt at diminishing these rights, and reinforcing the predatory exploitation model in Brazil.”

Amazon Watch also raised concerns over the regulation of activities by the energy sector in the Amazon, which would be overseen by the new state body.

Last month, a report by the Brazilian NGO Imazon showed that deforestation had almost tripled in the Amazon in March compared to last year. Figures gathered using a programme developed by Google Earth found a 195 per cent increase in the amount of forest destruction.

Greenpeace said the deforestation of the Amazon had contributed to climate change, which has led to severe weather incidents such as the current drought in São Paulo.

The charity said it was following the developments of the draft bill, which will go before a special commission once its members have been named.

Under the Brazilian legislative system, a draft bill must pass through various committee readings for revisions before it can be voted upon, in a process that could take decades and still be shelved.