“Perfection of means and confusion of goals seem — in my opinion — to characterize our age.” 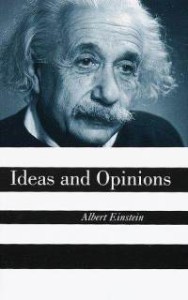 What makes Albert Einstein endure as “the quintessential modern genius” isn’t merely his monumental contribution to science but also his unflinching faith in the human spirit and in our civilizational capacity for good even in the face of undeniable evil. At the peak of WWII — exactly a decade after his little-known correspondence with W.E.B. Du Bois on racial justice and exactly a decade before his letter to a disheartened young woman (incidentally, a Brain Pickings reader’s mother) affirming why we are alive — Einstein penned a piece titled “The Common Language of Science,” which aired as a radio broadcast for London’s Science Conference in September of 1941 and was soon published in the journal Advancement of Science. It was eventually included in the altogether indispensable anthology Ideas and Opinions (public library), which also gave us Einstein’s views on the value of kindness and the combinatory nature of creativity.

Einstein traces how language developed as a tool of transmuting thought into acoustic expression and evolved into “an instrument of reasoning,” then argues that science is the most international language there is — humanity’s sole shared instrument of reasoning — but the scientific method alone, without moral direction, is insufficient in assuring our civilizational welfare. 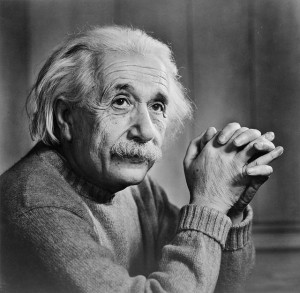 But there is another, subtler aspect of the recording that makes it profoundly pause-giving — perhaps one more discernible to those of us who live and think in a language not our native: Here is one of humanity’s most extraordinary minds, struggling to articulate its brilliant contents in a foreign language — slowly, imperfectly, with painfully measured words. There is no more jarring a reminder of our chronic tendency to mistake the presence of an accent for the absence of acumen — how often do people, even well-meaning and educated people, hear such verbal delivery by a stranger and immediately judge her intelligence as inferior to their own?

“You’ve got to tell the world how to treat you [or else] you are in trouble,” James Baldwin told Margaret Mead in their superb conversation on identity and the immigrant experience. And yet a central source of trouble in the immigrant experience is precisely the world’s inability to unbridle what you are saying from how you are saying it. It is wholly reasonable to surmise that even Einstein — who was once a little boy reticent to use even his native language — felt the weight of the unconscious social biases to which we are all susceptible.

This original recording of the piece, in Einstein’s own wonderfully accented voice, is nothing short of a cultural treasure. Transcribed highlights below — please enjoy.

The mental development of the individual and his way of forming concepts depend to a high degree upon language. This makes us realize to what extent the same language means the same mentality. In this sense thinking and language are linked together.

What distinguishes the language of science from language as we ordinarily understand the word? How is it that scientific language is international? What science strives for is an utmost acuteness and clarity of concepts as regards their mutual relation and their correspondence to sensory data.

The supernational character of scientific concepts and scientific language is due to the fact that they have been set up by the best brains of all countries and all times. In solitude, and yet in cooperative effort as regards the final effect, they created the spiritual tools for the technical revolutions which have transformed the life of mankind in the last centuries. Their system of concepts has served as a guide in the bewildering chaos of perceptions so that we learned to grasp general truths from particular observations.

What hopes and fears does the scientific method imply for mankind? I do not think that this is the right way to put the question. Whatever this tool in the hand of man will produce depends entirely on the nature of the goals alive in this mankind. Once these goals exist, the scientific method furnishes means to realize them. Yet it cannot furnish the very goals. The scientific method itself would not have led anywhere, it would not even have been born without a passionate striving for clear understanding.

Perfection of means and confusion of goals seem — in my opinion — to characterize our age. If we desire sincerely and passionately the safety, the welfare, and the free development of the talents of all men, we shall not be in want of the means to approach such a state. Even if only a small part of mankind strives for such goals, their superiority will prove itself in the long run.

Complement with the only surviving recording of Virginia Woolf’s voice and this rare 1929 recording of A.A. Milne reading from Winnie the Pooh, then revisit Einstein’s answer to a little girl’s question about whether scientists pray and his correspondence with Freud on war, peace, and human nature.