In the conflict-ridden Middle East, minority groups continue to be threatened, attacked and expelled from their home countries by terrorist groups such as Al Qaeda and the Islamic State of Iraq and Syria (ISIS).

Still, a new study released Wednesday [20 May 2015] by the London-based Minority Rights Group International (MRG) says populations in the region were more at risk from their own governments. 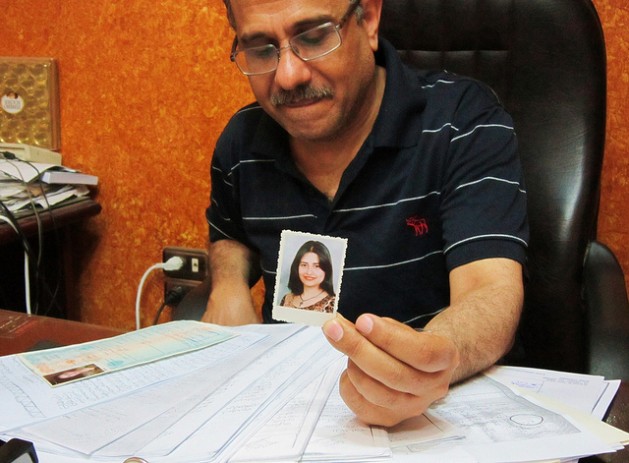 Hundreds of Christian girls have been abducted in Egypt, according to the Association of Victims of Abduction and Forced Disappearance (AVAFD), and coerced into converting to Islam. Credit: Cam McGrath/IPS

The minorities under attack include Yezidis, Turkmen, Shabaks, ethnic Kurds, and both Coptic and Assyrian Christians.

Mark Lattimer, MRG’s executive director, told IPS the threat to minorities around the world from terrorism is very real, “but it is generally not as great as the threat from their own governments.”

From Sudan to Myanmar to the Russian Federation, he pointed out, minorities have suffered systematic attacks from the governments that are supposed to protect them.

In Syria, while many minorities now live in government-held enclaves, the civilian death toll as a whole is highest from attacks by the government side, he added.

With over 200,000 people now dead in the conflict, and up to half of the population forced from their homes, the crisis in Syria continues to worsen.

For the first time, the Syrian crisis tops the annual ‘Peoples under Threat’ table.

Extreme sectarianism has now infected much of the country, with nearly all the remaining Christian communities living in enclaves in government-held areas, the report noted.

Only in the Kurdish-held regions of the north has there been a serious attempt at establishing an inclusive democracy, says MRG.

According to the report, threat levels to civilians in seven countries – Yemen, Egypt, Libya, Lebanon, Syria, Iraq and Afghanistan- increased significantly both last year and this year.

But the U.N. as a whole often takes a reactive approach, only taking notice once violations of minority rights become extreme.

Iraq headed the table when the Peoples under Threat index was first published in 2006 and it has never been far from the top of the index in the intervening years.

Over 14,000 civilians were killed in 2014, many of them in massacres perpetrated by ISIS as it expelled minority communities, including Yezidis, Shabak, Chaldo-Assyrians and Turkmen, from Mosul, Sinjar and the Ninewa plain.

Thousands of Yezidi women and girls remain in ISIS captivity, and the risk remains acute for Shi’a communities threatened by ISIS and Sunnis at risk of retaliation from Iraqi Security Forces and allied Shi’a militias, according to MRG.

Conflict in the Central African Republic, which has risen four places this year, to occupy number 10 in the ranking, continued between the largely Muslim former Séléka rebels and anti-Balaka militias comprised mainly of Christians.

Upwards of 850,000 people – nearly one-fifth of the country’s population – were refugees or internally displaced at the end of 2014, and many tens of thousands more fled their homes in the first months of 2015.

A controversial peace agreement was signed in April 2015 between ex-Séléka and anti-Balaka leaders in Nairobi.

Egypt rose another three places in the index this year, according to the study.

Ongoing fighting and toughening security measures have affected the lives of Sinai Bedouin, who have long suffered political and economic marginalisation.

Human rights activists also continued to criticise the government for doing too little to provide security for Coptic and other Christian communities, especially in Upper Egypt, where individuals, their homes and places of worship regularly came under attack.

In China, which has risen a dramatic 15 places in the table, there was a severe escalation in the tactics used by Uighur militants seeking independence in the Xinjiang Uighur Autonomous Region. Over 200 people were killed in terrorist attacks, hundreds detained in mass arrests and dozens of death sentences handed down.

Little has been done, says MRG, to address the legacy of under-development and exclusion of Uighur communities that lies behind the unrest, and the government’s strategy of labelling Uighur human rights activists as terrorists has forestalled attempts to improve the situation.

The return of a more autocratic style of government in the Russian Federation, which occupies position 16 in the table, has coincided with rising xenophobia in Russian society against migrants, whether from abroad or from the Caucasus, says MRG.

But the threat is greatest in the North Caucasus itself, where regular clashes continue between Russian forces and Islamist separatists in Chechnya, Ingushetia, Kabardino-Balkaria and, particularly, Dagestan, adds MRG.